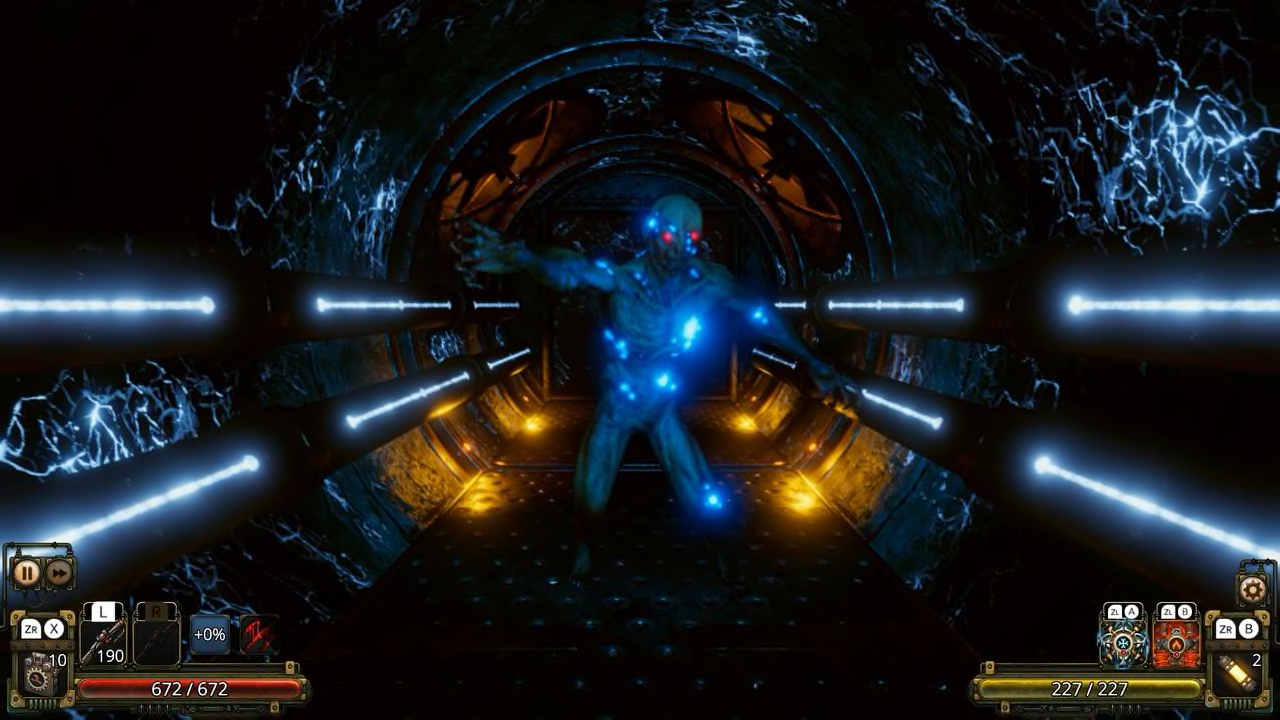 Proof that lockdowns can be pretty fun.

I find myself in a strange place. Not the Arx Vaporum facility, where the game is set, but in playing a prequel title which came out after the original Vaporum, and playing it before having played the sequel. Did that make sense? If so, can you explain it to me?

In Vaporum: Lockdown, you enter a world of mechanical and electrical gadgets, mutant rats, and clearly homicidal drones. It looks like lights are not popular in the tower. Fortunately for the gamer, the low light and shadowy environs help set the proper tone for the game, which is slightly creepy. With mutant rats and homicidal drones roaming the place, you wouldn’t expect anything else, right? 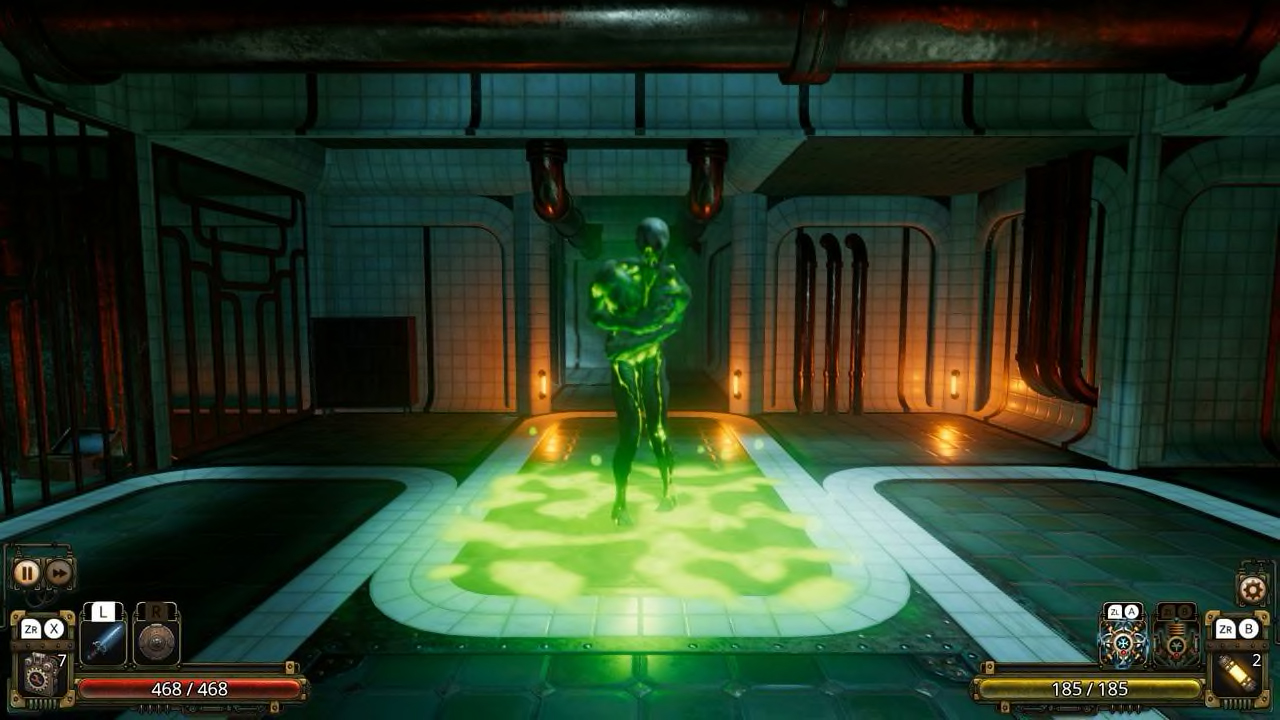 Don’t worry, the game isn’t just about rats and drones. You get puzzles to solve, pitfalls to avoid, messages to read, armor and weapons to upgrade, and enemies to evade or destroy, all while trying to make it out alive. No problem. Vaporum: Lockdown is essentially a dungeon crawl, but you are not one member of a party, you are on your own. You do have a friend on the radio, but he’s only able to send you information, and some of that isn’t exactly timely. 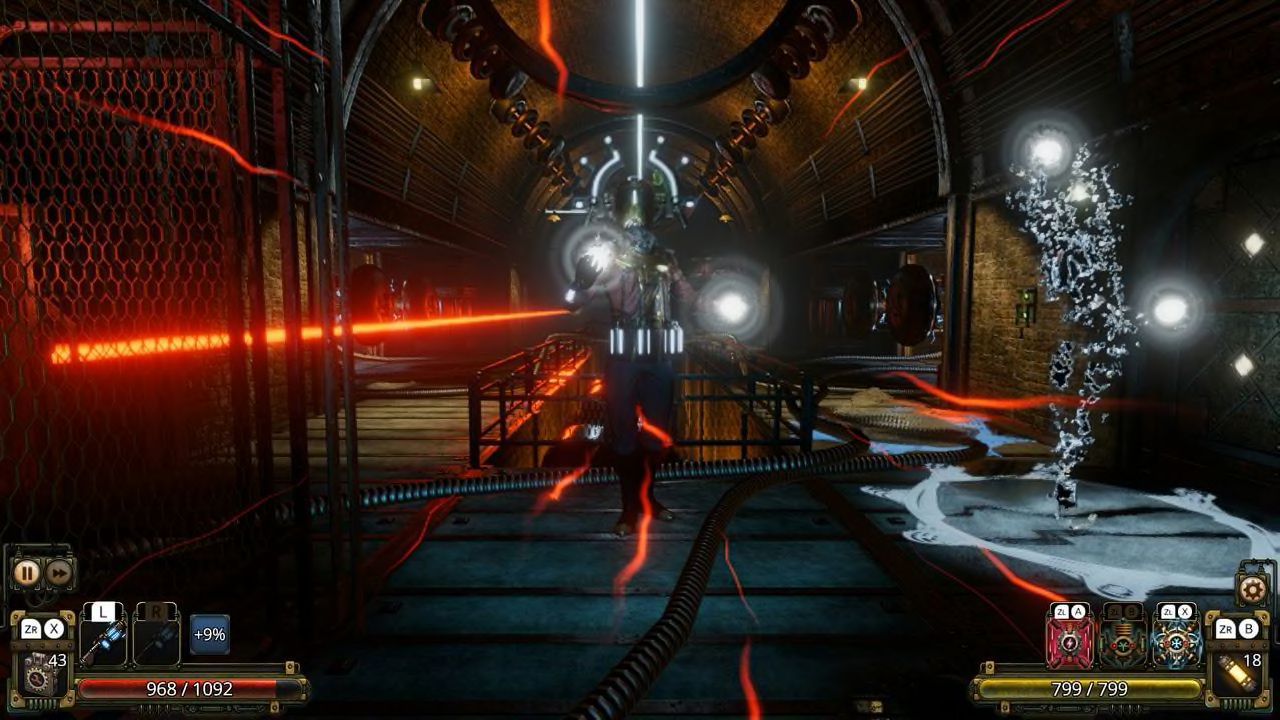 If you want to look around, you can use the ZL button and right Joy-Con to get a smooth pan.

Before all this, you do get some background. Your character is Ellie, and you are a researcher at the Arx Vaporum. The facility is located out to sea, and the research centers on the mysterious substance known as Fumium, which is used as a source of energy. You will get the opportunity to use the Fumium you collect for devices, but that is for later. To start, you are headed down to a lower level to check the functioning of the teleporter on that level. As you might expect from a good dungeon crawler/puzzle game, you are going to need to find a few things before you get to the teleporter test. Once you get off the elevator, the game starts with exploration and puzzles right away. The game won’t tell you that there is some sort of puzzle to solve, you just won’t be able to progress until you figure things out. There are some points in the gameplay where this can be a bit annoying, but every once in a while, the game will throw you a tip. [Spoiler alert – The first puzzle is in the corridor immediately after getting out of the elevator, and the scene looks like this… 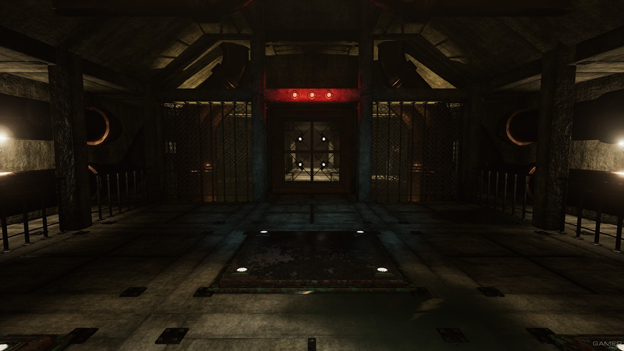 The spoiler is you will need to figure out in what order to step on the trigger plates to get the door lock to release. It gets more difficult from here, so have fun.]

In addition to the puzzles (which range from “fairly obvious” to “I have pressed every button on this controller‚why isn’t anything happening?!”), you also have enemies that will bite, shoot, or pummel you if you let them. If your timing is good, you can move around to evade many of the attacks. You’ll want to get good at this sort of dodging about as it gets more useful as you progress in the game. Timing your attacks is just as important. Each weapon you have comes with its own damage level and cooldown time. You start with a pipe wrench which can do 8 points of damage, and each swing can only come as soon as 1.25 seconds after the last swing. There are new weapons to be found, and you have a handy inventory view ready and waiting for you to press the B button… 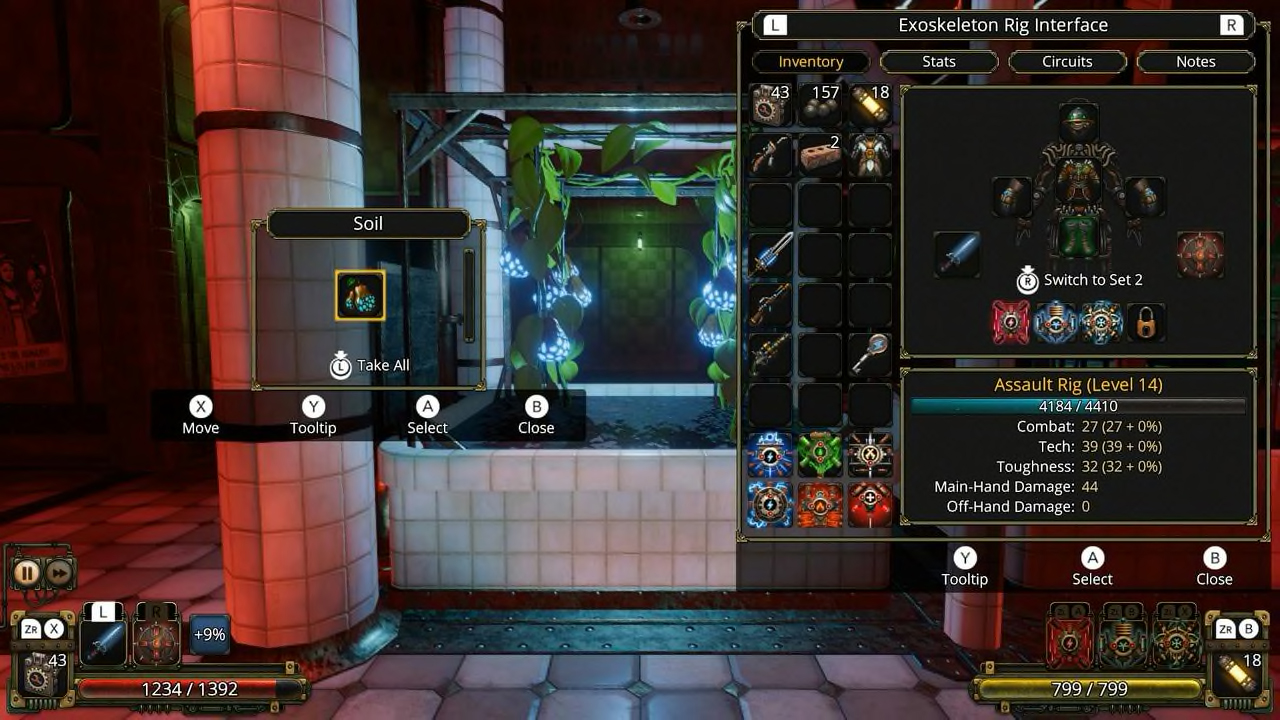 At the start, grab everything. As you move on, you will need to be a bit more selective about what you pick up, what you use, and what you leave or drop. Some of the items you can pick up are documents or audio recordings left behind by other researchers. Check them out, as there are some good backstory bits to be had. For the audio clips, including some of the character dialogue, don’t expect greatness. Most of the delivery is good, but that’s about it. As with the different turns of events and developments, there is not much about the dialogue that you wouldn’t have anticipated. This isn’t a bad thing, there’s just a certain familiarity with the genre with a pinch of predictability thrown in.

The part of the game which really stands out as unusual is the environment itself. For a research facility, there are a lot of spike pits, fire spouting floors, secret chambers, and booby traps. If you can allow yourself to get lost in the (dare we say it?) steampunk atmosphere, the incongruities can be taken in stride. 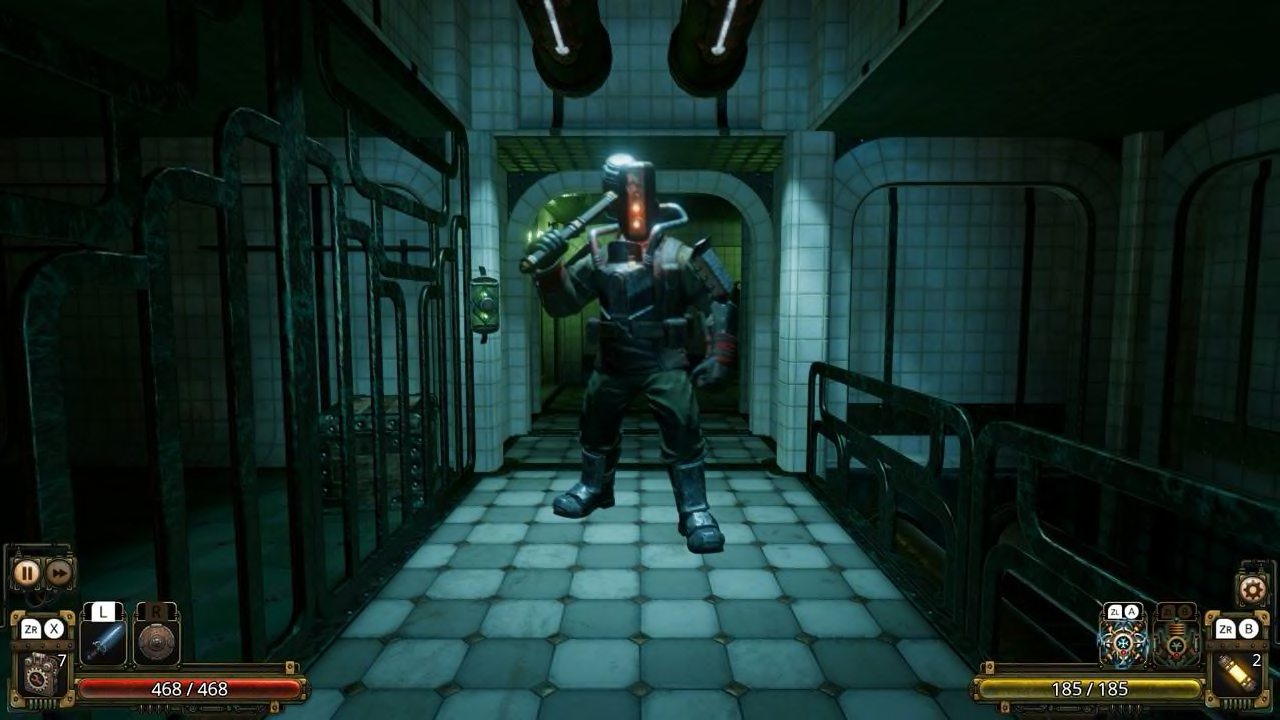 When you get past the first stage, you gain access to four alternate rigs, or exoskeleton/armor suits. When you get to this point, consider carefully the pros and cons of each suit. Once you confirm your selection, that’s your rig for the duration. This does open an interesting possibility for replay; you can run through the whole game four times, just to see how you fare with each of the rig types. On top of the actual suit, as you advance you earn skill points which you can assign to characteristics ranging from personal stats to effects related to your rig. You can also equip weapons and other devices on your rig in the inventory screen. There are weapons like swords and maces (good for melee), as well as pistols and shotguns (good for distance attack). As you might expect, you need ammo to use the guns, and a weapon which deals more damage takes longer to use again (I still want the BFG 9000 but, alas, it’s not to be found here).

If you really like exploring every possibility, there are some secret rooms, some with handy loot, which can only be found by using the AR and left Joy-Con to move the cursor about and pressing the A button to see if there are any hidden switches. If you are the compulsive type, the game will keep track of how many optional secrets you find.

Vaporum: Lockdown is actually a good option for anybody looking for some brain teasers and a good dungeon crawl. You don’t need a lot of experience with this type of game; there are five difficulty levels, so you can go from casual to crazy. The puzzles don’t change, but the combat difficulty can be modified to your taste and experience. This, coupled with the four rig options, means there is plenty of replay value with this title. The pacing is decent, and the story is good. You don’t get a soundtrack, but you don’t really need it; besides, the rest of the sound effects are sufficient to keep the proceedings creepy and suspenseful.

As a grid-based, first-person, action/adventure RPG, Vaporum: Lockdown offers plenty of gameplay elements to keep you busy. The dungeon-crawling game play is straightforward and not overly complicated, despite a good number of puzzles sprinkled in. In short, this is a solid prequel to the original Vaporum. Have fun exploring.