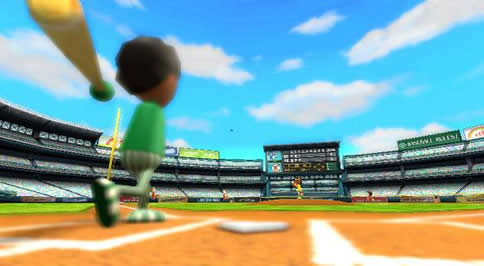 Those who have been lucky enough to acquire a Wii have discovered the marvel that is Wii Sports. It was the first game I played and it is a perfect introductory title for the Wii’s innovative control scheme. I was surprised how small the wiimote was and how easily it fit in my hand. It felt natural and didn’t feel light or cheap. I inserted the disc and proceeded to play some Tennis.

At this point, it’s important to note that my learning curve starting off was a little different than most since I had seen many videos of ‘how to play.’ However, I was quite surprised when my parents and grandparents became interested in the game as I played. It took them no time at all to get used to the controls. My grandma, who has never played many games, played tennis like a pro after only 3 games of practice. I was astonished and knew that Nintendo’s simple philosophy made sense. They got used to the controls almost as fast as I did! All of us traded off playing singles (I only bought one extra wiimote at launch) and had a blast. 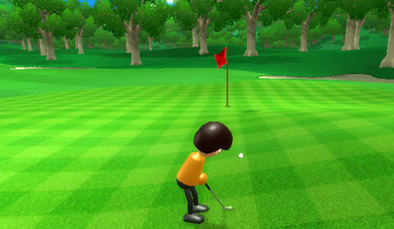 Ok, now onto the game itself. There are five games included: Tennis, Baseball, Bowling, Golf, and Boxing. Each of these games display different strengths of the wiimote. Tennis and Baseball show off the free range motion and 3d positioning features. Bowling really shows off the ability to sense tilting and/or spins. Golf takes these two features and teaches one how to control their swings/motion. Boxing is a fun game that pretty accurately shows depth with various punches and movements.

On top of all these games, the package features 3 practice modes for each sport. These modes help to hone your abilities as you improve in each sport. There are some very subtle improvements that can be made in each of the sports. This is where the depth comes into the game. It’s fun enough for anyone to pick up and play, yet has enough depth to provide hours of entertainment.

Visuals: The visual style of Wii Sports is very unique. It’s very simple and very clean. There is not a high level of detail in the characters or some of the surrounding environments. For example, the baseball stands are filled with flat polygons and circle textures for ‘people.’ Other sports feature fairly detailed environments such as Golf or Tennis. Both of these sports have really bright, vibrant textures. Shadows, light, and textures are all fairly detailed in these environments. Overall, Wii Sports is not meant to be a graphical showcase for the Wii.

Gameplay: Wii Sports is a testament to what can be done for all future sports games on Wii. It establishes a great benchmark that developers can see how to implement these gameplay innovations into full sports franchise games. Madden 07 is a good example of this. The learning curve is very small and can easily be mastered with little effort. The developers went out of their way to ensure that the experience would be memorable for all who played.

Replay Value: If ever there was a game worthy of this category–it’s Wii Sports. The concept is so simple yet delivers every time I come back to play. Hardcore games like Zelda are great, but Wii Sports goes above and beyond in its depth and longevity.

Wii Innovations: Wii Sports is one of the few games that fully utilize the Wiimote. Every sport exhibits just how much the wiimote can do. It can be played so easily even with such a new control scheme.

Fun Factor: I know you’ve heard it before, but this game is fun!! The DS capitalized on simple and fun games that were easy to play. Wii Sports continues that philosophy on the big screen. Once you play, it’s so hard to stop. Nintendo went all out on delivering a fun and truly interactive experience.

Verdict: Since Wii Sports comes packaged with the system, it’s hard to avoid. Trust me, don’t take a game like this for granted–this is a game you can keep coming back to and enjoying it every time. Definite must play/own!