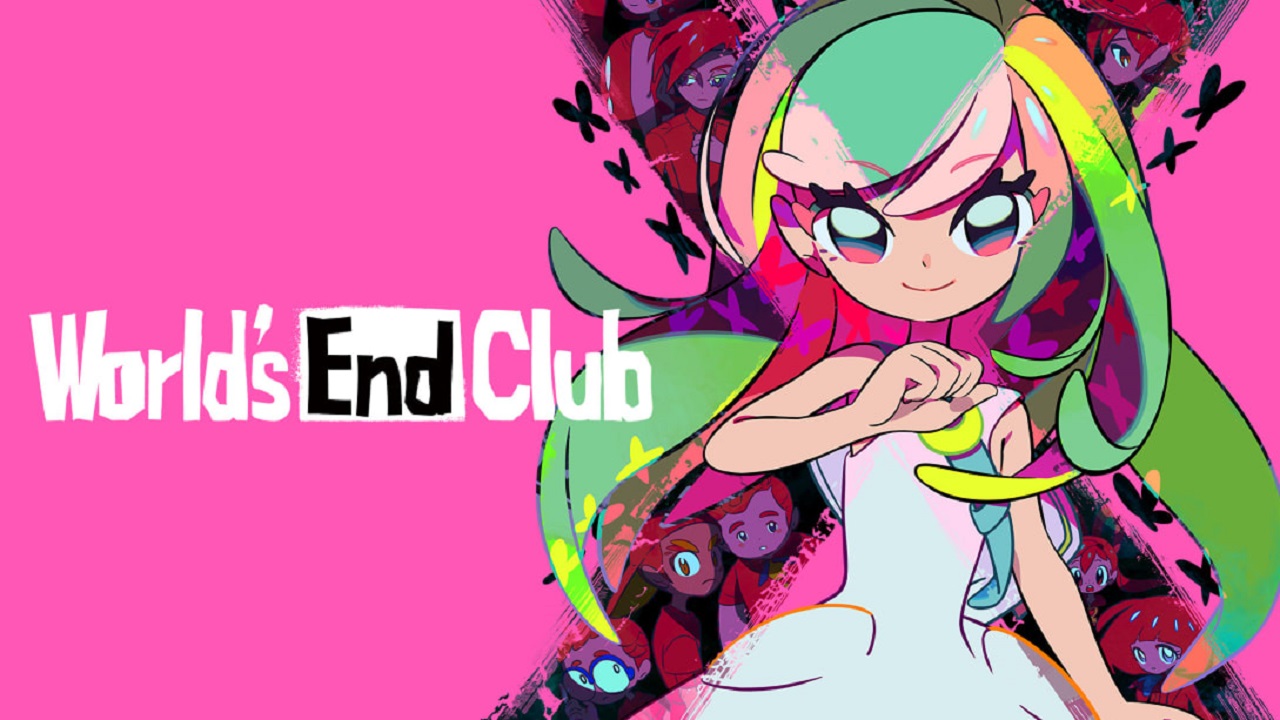 The Go-Getters Club was enjoying a simple field trip from Tokyo in 1995 when a meteorite crashed onto Earth. The kids wake up to find themselves in an underwater theme park, where a creepy jester robot girl announced they are to play a “Game of Fate.” One would think that this would be the whole game, but what if I told you that it was only the beginning? Like when I reviewed Aviary Attorney: Definitive Edition, I think it is best to go into this game blind. I’ll try to avoid anything too spoiling story-wise.

To start, despite World’s End Club being rated T for mild violence, the game is surprisingly juvenile. I know that most of the cast is children, and while at times they do swear, there are some things that characters in the game say that come across obnoxious. Like: “Who you callin’ poop face, pee face!.” I suppose kids act this way, but it was a bit cringey. It feels like this game was initially rated E-10, but they wanted it to look mature and pushed the story just enough to get a T rating.

There is very minimal gameplay, as it mostly involves clicking through dialogue. But the parts you do have control over are side-scroller-like platform puzzles with a few easy boss battles sprinkled in. There is some input delay which can cause trouble when you’re in a tight spot or need to act fast in a level. There are branching paths where you can pick what to do as disagreements split the Go-Getters Club up, and you have to select which group’s choice you agree with.

I don’t know why the game takes place when it does, as the character’s outfits and lingo don’t reflect the time period. But otherwise, the story and plot have a lot of twists. And the characters have personalities, for better and for worse. My favorite character was hands down Pochi, a gamer boy who is soft-spoken but incredibly helpful. If you don’t watch anime or are less tolerant of the stereotypical characteristics of characters in that media, you may be put off or less forgiving of how exaggerated they are. There’s the short Tsundere girl, the nerd who’s obsessed with a Power Rangers-like show, as well as the lone wolf with a heart of gold.

World’s End Club has an art style, character designs, and color palette that are very good. During some cutscenes, it will be laid out like a comic book page, adding a sense of style and personality. I really enjoyed the beginning and end of the game. The middle is where the story seems to drag, and I felt it could have been better spent if they didn’t waste time on pointless repetitive dialogue.

Overall, World’s End Club is a game that I’d say is worth playing at least once for the experience. It can be painful, but some moments genuinely surprised and impressed me enough not to hate it as much as I could. Priced at $39.99, I’d say to wait until it goes on sale to around $20 or so. Go-Getters Club! Hey! Hey! Ohhh!!

Overall, World’s End Club is a game that I’d say is worth playing at least once for the experience. It can be painful, but some moments genuinely surprised and impressed me enough not to hate it as much as I could.