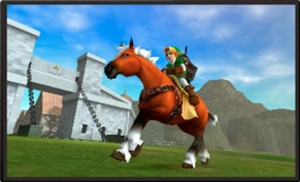 Rumor has it that Ocarina of Time screens where found hidden in the Nintendo E3 press site which where entitled, 3DS. These screens have since been pulled from the server. To discredit this rumor. I have heard reports that Nintendo is showing off old titles on the 3Ds, in 3D, just to show that it can be done, but this doesn’t mean any confirmation.

The official Nintendo America announced this on their twitter.