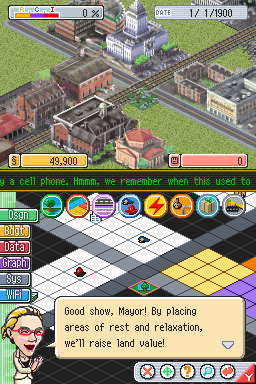 CHERTSEY, Surrey, – February 28, 2007 – Electronic Arts (Nasdaq: ERTS) announced today that the SimCity™ franchise is returning with SimCity™ DS, developed especially for the Nintendo DS™ platform. In addition to creating and growing their very own pocket sized city while being on-the-go, players will be able to leverage the unique action features of the Nintendo DS system, discovering an entirely new way to play this internationally acclaimed franchise. The product will make its debut to consumers worldwide in summer of this year.True to the SimCity series, players will be able to create and control their city in the palm of their hands…and much more. Maximizing the stylus and built-in microphone controls of the Nintendo DS, SimCity DS brings to the franchise like never before the feeling of personal involvement with your city—from blowing into the microphone to put out fires in the city to signing off on mayoral proclamations with your stylus. By enabling the players to communicate with each other, the “wireless data exchange” feature brings additional interactivity into the game. As an added bonus to SimCity fans around the world, the game also offers a wide array of recognizable international landmarks to spice up your city.

“We are very excited to bring the SimCity experience to the Nintendo DS platform,” said Takahiro Murakami, Producer of SimCity DS. “The unique Nintendo DS functionalities inspired us to incorporate many new features to delight the most dedicated SimCity fans. The game is filled with fun surprises that will appeal to new and existing fans of the franchise.”