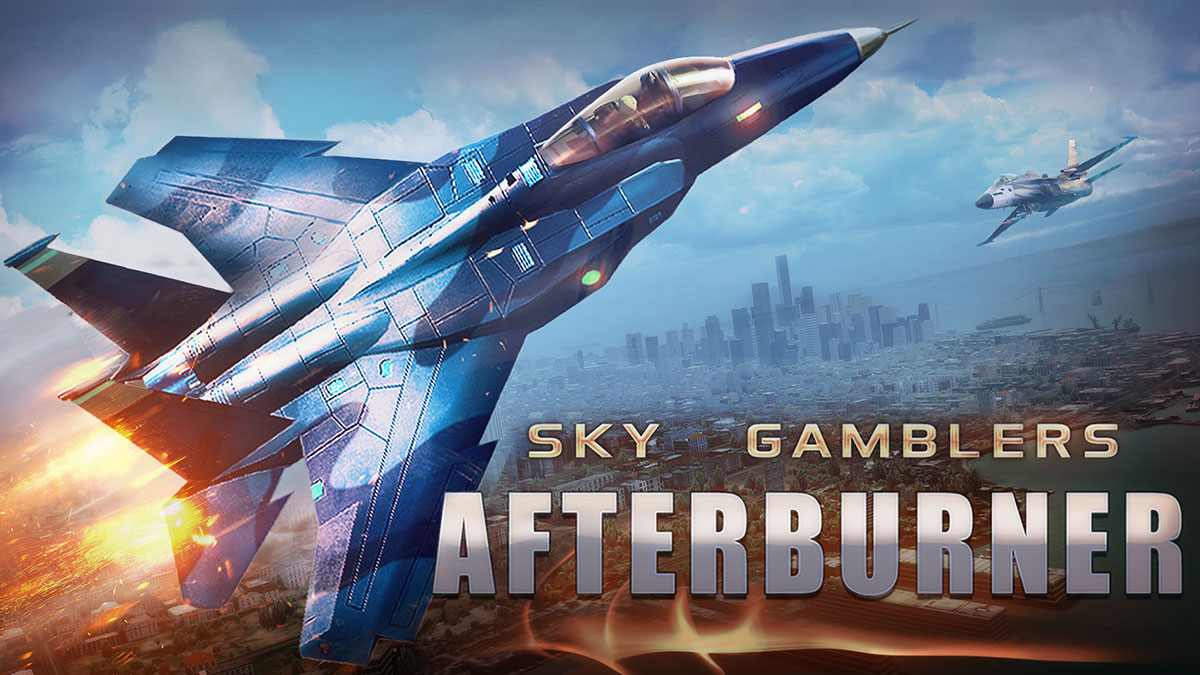 I’ve been playing aerial dogfight games since Atari’s Combat, and the thing that amazes me is how much they don’t change. Oh, the graphics in Sky Gamblers – Afterburner are better, sure—there are certainly more and colorful blocks on the screen—but the experience is simple and unchanged. The logistical nightmare of keeping a plane in flight is removed in favor of just controlling how fast you move as you try to keep your weapons pointed at the bad guys. The game takes care of the rest.

Afterburner isn’t a jet flight sim, but more of a cousin to the classic arcade games like 1941 and Zaxxon, though in a 3D space, not a side-scroller. You never have to worry about fuel or ammo; guns and missiles replenish themselves and booster rockets endlessly recharge after a few seconds. 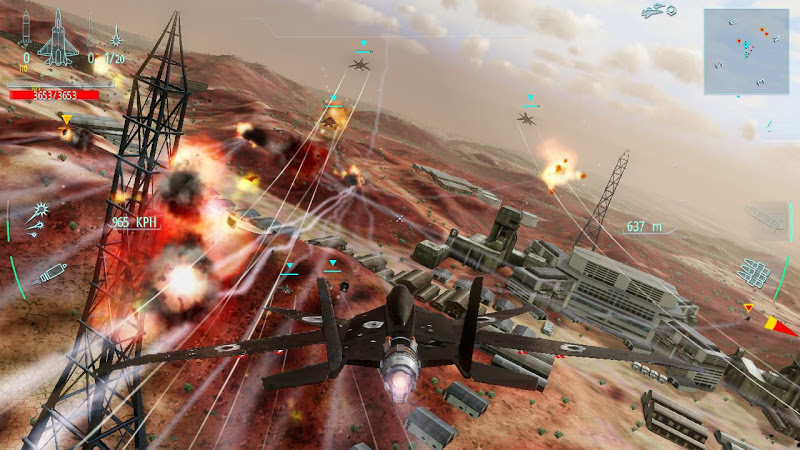 Your only non-renewable resource is the “health” of your jet; take too much damage or crash and it’s back to the reload screen, which is only a minor annoyance since the game keeps track of your progress in each mission and allows you to restart the mission from the beginning or from a checkpoint.

The controls are easy once you figure them out (more on that in a moment). Left stick is speed and side-to-side motion, right stick controls your orientation. The faster you go the less maneuverable you are, as it takes more time to complete a turn. Reduce speed for a quick turn and you run the risk of the enemy getting the drop on you or, worse, causing an engine stall. 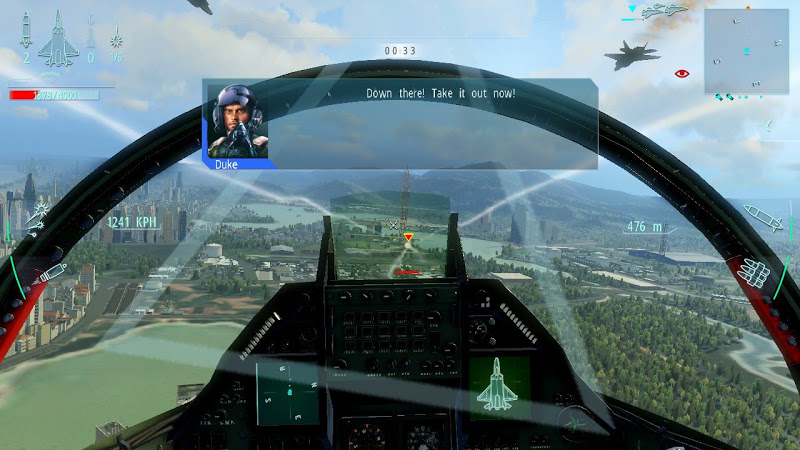 Most of the other buttons on the Joy-Con are also useful in the game, so take some time to play around with them because Sky Gamblers – Afterburner’s tutorial section is incredibly underdeveloped. There are only two parts to the tutorial. One is a non-interactive explanation of the HUD while the other explains the basics of plane control, but there’s nothing about combat or other control features.

For example, The left arrow keys automate a series of loops and rolls you can use to quickly change direction. Your left trigger buttons activate the afterburner and anti-missile flares, but I had no idea I had those until part-way into the second mission. Each plane carries two kinds of missiles which you switch between using the X button. What do they do differently? I suspect one is better for ground targets and the other for jets, but honestly, I have no idea. Also, I discovered by accident that if you hold the missile button after firing you’ll get a tracking camera shot as it closes in on the target. The game, however, mentions none of this. 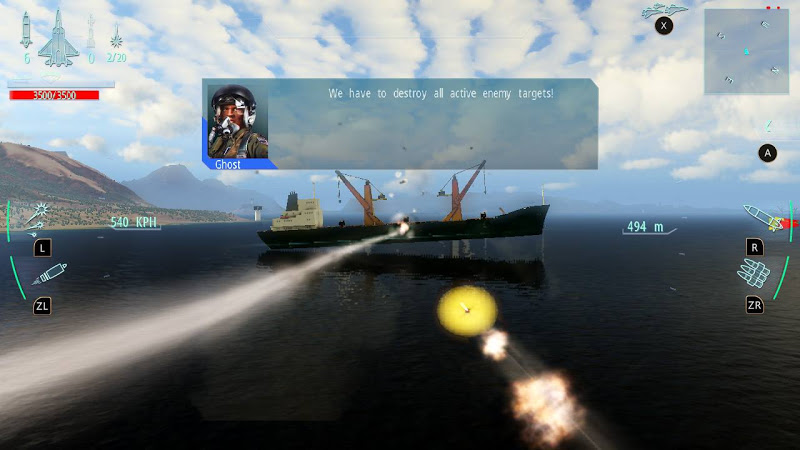 Fortunately, this wasn’t too frustrating because, even on the hardest setting, Afterburner has such forgiving gameplay that I rarely needed to play a mission more than two or three times to get through it. The HUD shows you where your targets are, you lock your missiles on them by keeping them close to the center of your screen, and that’s mostly it. Using the cannon is harder, but it does give you a satisfying, metallic raindrop sound when you connect.

Story-wise, the game includes some basic RPG elements, giving you experience points and in-game currency (which I dubbed “Sky Bucks”) that you can use to unlock new planes and upgrades. These are a leftover from the game’s free-to-play mobile heritage, but here you get the full content with your $19.99 purchase price. 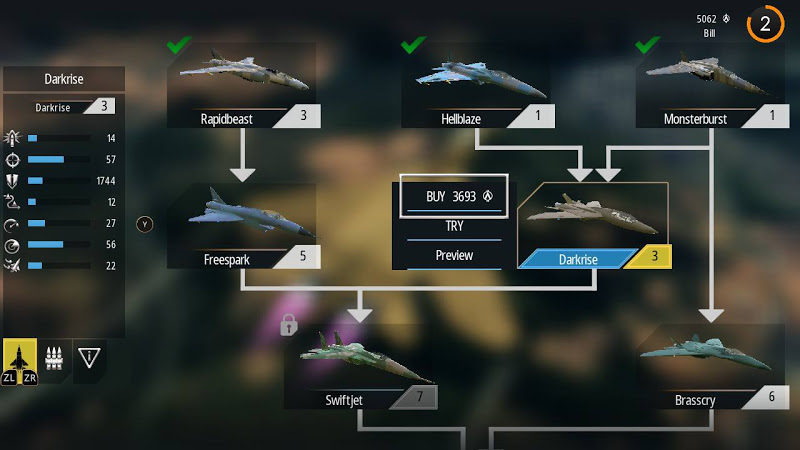 In Campaign Mode, this is all folded into a story that feels like it fell out of a low-budget 1980s movie; a rogue Admiral convinces his entire fleet (including bases throughout the world) to turn traitor and attack America for… reasons? This is all an excuse to give you world-spanning locations for high-flying combat, but makes it feel even weirder to be firing heat-seekers into crowded population centers over Rio or taking down radar control centers that are attached to the Hoover Dam.

If you’re looking for a simple game about jet combat, Sky Gamblers – Afterburner will almost certainly scratch that itch. You don’t have to worry about anything other than lining up your shot and not crashing into mountains. I suspect it’ll really appeal to those who want to enjoy the multiplayer element where they can take on their friends rather than the simple AI villains who make this game mindless fun.