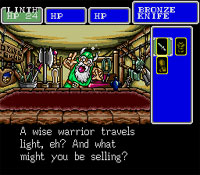 I apologize for not bringing the weekly predictions to you last weekend. I have been having some internet problems lately, but all is well. Now let’s take a look at those predictions!

Shining in the Darkness

This game was banished to our wild card list for eternity, but something recently happened to change that. An image of Shining in the Darkness has appeared on the VC via the legendary Firefox Hack. This is usually a sign that a game will be released very soon, so the possibility is strong that SitD will show up this week.

Yes we have been predicting this one for a few weeks now, based mostly on the fact that Nintendo Power said we would be getting it in July. It just goes to show you that NP has a horrible track record with VC predictions…so bad in fact that they have stopped listing games that are coming soon. We still think that Super Turrican is coming soon, and this could be the week.

Adventure Island is a true NES classic. Even though the TG16 version of the game was released some time ago, this week we received some great news about this title…it has been officially rated by the ESRB! Sometimes games sit on the rated list for a while, and some times they are announced and released in the same week. Lets hope that Adventure Island is one of the latter.

The Firefox Hack is back! Earlier in the week images starting showing up early via the Firefox hack, and DK Jr. Math was one of them. In the past this has meant that a game was very very close to release. DK Jr. Math would be a great “filler” game to release alongside on the the Metroids so don’t be surprised if it shows up tomorrow.

Volleyball would be another great “filler” game for one of the upcoming Metroid weeks. ESRB rated and released in other regions, this game has a very good shot of coming to the VC either this week or next.

What the world needs is another Kirby game on the Virtual Console. With so many choices we had to pick games that had at least 2 criteria for showing up….Kirby is ESRB rated and released in other regions. I’m not sure if it will come in either of the Metroid weeks but Kirby’s avalanche does have a great shot at showing up in the month of August.

CONFIRMED FOR THIS WEEK

Nintendo has confirmed that Metroid will be on the VC this week!

Hudson has confirmed that Cratermaze will be released this week.