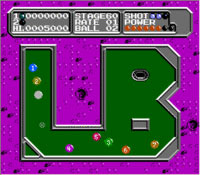 I know I have let you guys down by not posting the vc predictions the past couple of weeks and I apologize. Hopefully the third time will be a charm. Now let’s get to those predictions!

It has been a few weeks now since Lunar Pool was released in Europe, so it’s American release is that much closer. LP has also been rated by the ESRB, so it has that going for it as well. I hate to admit it, but I really did like Lunar Pool when I was younger, so I hope that this is the week!

What a strangely great title Wrecking Crew is. A true blast from the past, Wrecking Crew was one of the original NES games and it is entirely possible that only a handful of people remember it fondly, let alone know that it is a MARIO game. Yes our favorite plumber was the star of Wrecking Crew! The game has been released in other regions, and is ESRB rated so don’t be surprised if it hits the VC on monday.

Oh Mega Man, where the heck are you. The Blue Bomber has been absent from the Virtual Console for far too long, and the fans are getting restless. Now that Metroid mania has died down a little bit it may be a great time for Mega Man to hit the VC. ESRB rated and released in other regions, we are patiently waiting Nintendo… but please don’t make us wait much longer.

Vegas Stakes was released on the European Virtual Console back on August 31st, and it was also recently ESRB rated. This game could be the SNES representative in this week’s VC group.

One of the last “NES Sports” games to come to the Virtual Console (baseball, tennis, golf) Volleyball has been waiting in the wings for a while now. I am guessing that we will either get Lunar Pool OR Volleyball this week as our NES game.

The lone Genesis game on our list this week is Alien Storm. This game has been ESRB rated for some time, and it has also been available on Japan’s VC for a while as well. It really is a guessing game when it comes to figuring out which SEGA games are about to be released (Vectorman, VECTORMAN!!!) and Alien Storm is as good a guess as any.

Hudson has confirmed that Neutopia II will be released this week.