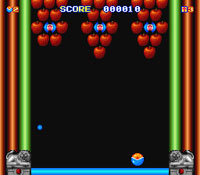 Here we are once again to test our psychic abilities on the upcoming classics. Some games have been on the list for weeks, but no release. Others were released after being on the list only once. Then there’s games released that never made the list. That’s what makes the prediction process fun, there’s always room for surprises.

Now ‘Let’s take a look into the crystal ball’

Hudson has confirmed that Drop Off will be released this week.

Originally released for the Super NES, this game is a classic in the minds of many. Super Turrican has been rated by the ESRB and was mentioned by Nintendo Power as a game to be released in the near future. This was one of the games that NP said would be coming in July, and with tomorrow being the final Monday of the month their reputation is on the line.

And for the out of left field pick of the week we have Breath of Fire 2. I guess it’s not that strange of a pick since the game is rated by the ESRB and has been released in Japan. BoF was mistakenly listed as a PAL region release on a NoE press release. Maybe they meant that BoF was coming to America this week? Yes its a huge stretch, and completely insane logic, but just go with me on this one ok?

Yes, we know, you all think that this game sounds pretty lame. I’m sorry but you are just going to have to take that up with Nintendo, we don’t make the games we just predict them. ESRB rated, released in other regions, and reviewed by Nintendo Power as a JULY release…the awesomeness that is Donkey Kong Jr. Math should be on the VC tomorrow.

We really should have this game by now, shouldn’t we? Rated, and released in other regions, it seems that Nintendo is teasing us with the thought of finally being able to play as the Blue Bomber on the Wii.

Metroid is a game that absolutely MUST come to the Virtual Console soon. It’s the biggest franchise that has yet to be represented on the Wii in any way. With release of Prime 3 right around the corner, the possibility of getting Metroid is stronger than ever. This could FINALLY be the week we see Samus on the Virtual Console.