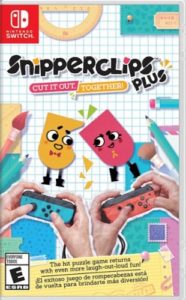 Snipperclips Plus – Cut it Out, together! is an easier game to review in some ways. An expanded version of a title we already covered during the Nintendo Switch’s launch, Jemma scored the original an 8 out 10. New Switch owners who weren’t around back in March now have the opportunity to pick up this fleshed out package, and as a physical copy no less. It’s worth it, especially for fans of co-op gaming.

This puzzle game thrives on variety. Whether you’re helping a hamster wheel their way across the screen, trying to place capsuled critters in a spaceship, aiming from a wobbly cannon, and so much more, everything is kept fun and fresh. Working as a team brings a special satisfaction all its own, and my wife and I have enjoyed solving the more challenging tasks of Snipperclips Plus together.

Let’s briefly go over some of the fresh content, which is also available to existing owners as $9.99 DLC. There are dozens of new puzzles spread across a couple of new worlds – Cosmic Comics and Toybox Tools – which will need to be unlocked for new players. Those who’ve mastered the original game will find a challenge geared toward them, although there are still some variants on earlier puzzles that offer an easier time.

You can also go back to levels you’ve already beaten, and tackle them again in random shapes. This breathes some new life into familiar puzzles. Controlling Snip and Clip in randomized forms is a neat replay incentive.

Less successful is the new stamp mode, which feels underdeveloped. “Express yourself with STAMPS!” the game encourages, but they really just make me miss Miiverse. You lose your art upon quitting the mode, putting a damper on spending much time here. Album capture isn’t the same. However, I do think kids might enjoy this some in small bits, especially as a break between tough puzzles.

Oh, and the game now supports the Pro Controller for Switch owners who have and prefer it. There are a few other new things as well, but for the sake of space and fun of discovering them on your own, I’ll leave it at that. More content for an already good game is something to smile about.

At the risk of redundancy, I’m going to briefly comment on two things mentioned in our original review. One could be considered a negative, mainly that the game is nowhere near as fun when playing solo. I love co-op, but  Snipperclips Plus, more than many, really should be viewed as primarily a multiplayer experience. My other recognition is just how creative and unique this game is. If I didn’t know Nintendo was just the publisher, I’d swear they handled development duties as well. In this case, it was indie studio SFB Games. Great job guys!

I’ll sum up by echoing Jemma from our original review – this game is “Snipperific!” If you’ve yet to play it, add it to your wish list. This is one purchase you’ll be happy with.

I’ll sum up by echoing Jemma from our original review – this game is “Snipperific!”