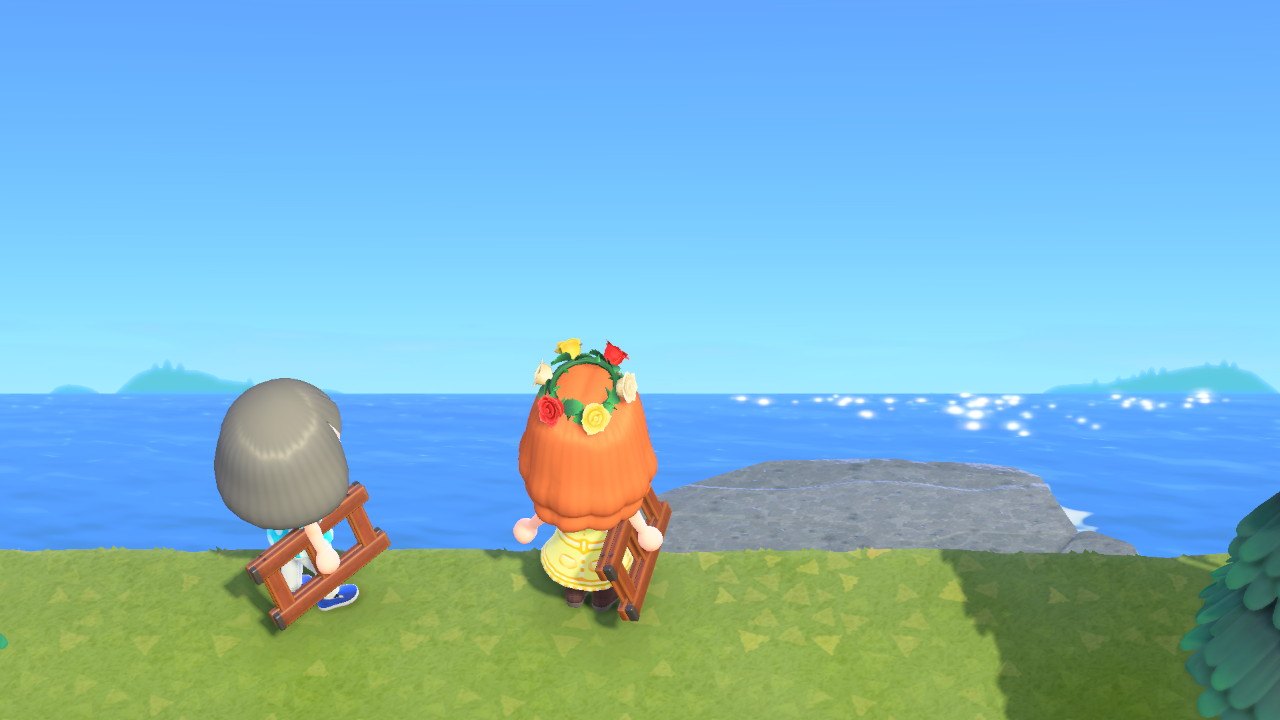 As someone who has waited so long for the new installment to Animal Crossing, getting to experience Animal Crossing: New Horizons a minute into its release was all I’ve thought about for months. 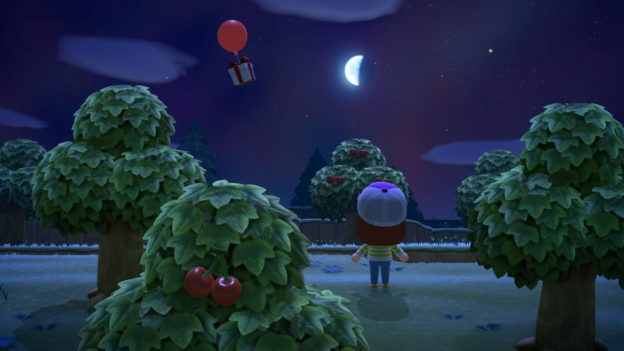 I landed on a bright and shining island where Tom Nook was awaiting my arrival. One of the Nook twins even referred to him as “our fearless leader”—a nod to every totalitarian meme the community has shared about the penny-pinching raccoon. It would be easy to write a player’s guide to the first few days on the island. But I’m here to tell you how I felt, not what I did.

Welcome to Your Island Getaway

I always enjoyed the joke of my character somehow just ending up in a village of animals with no explanation, but this new setup had me organically become part of the restoration and beautification of the island. I was one of the first to presumably explore the island with the crew. This was much better than the blassé, “I dunno, let’s put this knucklehead in charge,” attitude of my past towns. But, this setup does more than solidify your character’s place on the island, it gives you a reason for why you are allowed more power to make the island your paradise—a promise from day one. 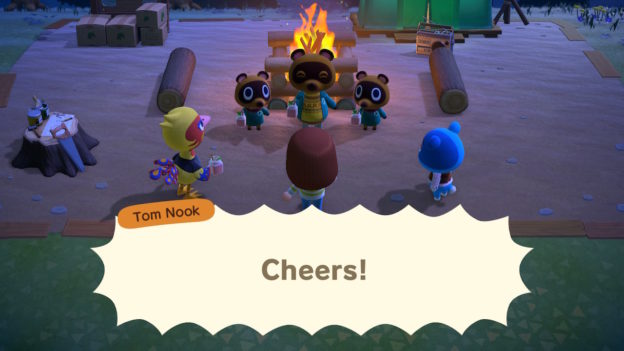 If you’re like me, the first thing you couldn’t wait to try out was the character creator. This was adapted from Happy Home Designer and Pocket Camp, and many players were excited to see it in a console installment. The character creation screen had a handful of options. It was a good stepping stone in what could have been a complicated process in one of your first actions in the game. In the beginning, I was somewhat underwhelmed by the lack of hair color choices, but as you’ll see later on, New Horizons is about the gratification of unlocking features and giving you more to work towards. After just a day, I was already looking more like me, so who’s to really complain? 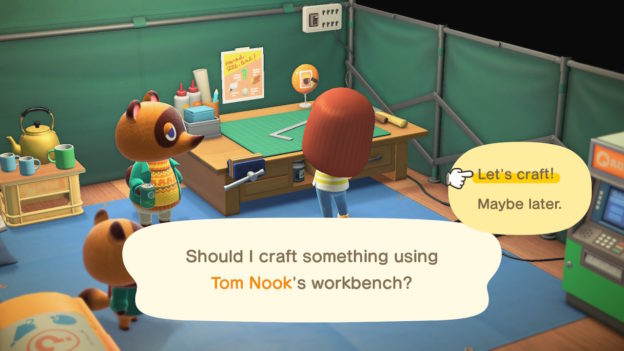 Many people were worried that this game would be a console clone of Pocket Camp. However, Nintendo has proven that they’re more intuitive than that. Pocket Camp worked as it did because it followed a similar model that all mobile games follow—slow down modes to make you wait for projects to complete and give you screen-time breaks, ability to pay in an already free mobile game to get more perks. However you may feel about that format, Nintendo hasn’t abused that concept yet on the Switch, and I hope they keep it that way. In Animal Crossing: New Horizons, you still have to wait a day for many major projects to come to fruition—just as you had to before—but all basic crafting is immediate, so long as you have the materials collected. 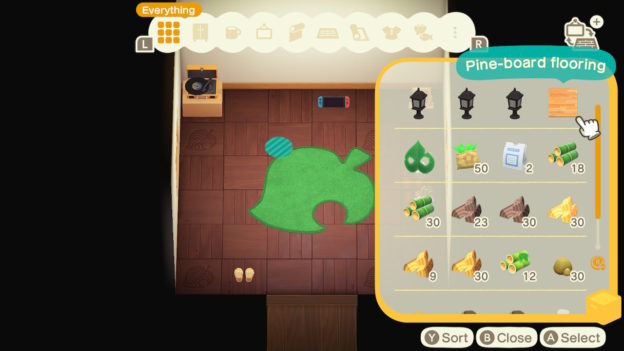 The interior and exterior designing is something I’ve loved the most from the games. New Horizons added quick access to storage and pockets while decorating, and camera modes to adjust furniture on the walls and on the ground. When I tell you this has made house decorating so fun, I mean it. My hope is we eventually get a similar upgrade for the exterior decorating, as well.

Animal Crossing: New Horizons is the most customizable AC title yet! You’re given so many customization and management options from the Island Designer App, your character’s outward appearance, and decorating your home.

I knew this would be a beautiful game, but finally exploring it for myself was a new experience. Nintendo put a lot of energy into making every strand of hair, every leaf, every ripple in the water react to the weather conditions and time of day. The music was relaxing and soft. It’s a world designed to keep you at ease. I also appreciated the multiple perspectives you could take, from a top-down view, to a closer third-person perspective, to even closer. (When the tarantulas were out, top-down especially helped.) 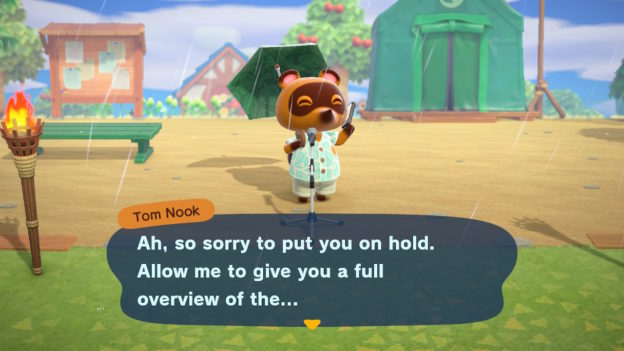 The inclusion of the smartphone—also adapted from Pocket Camp—made access to information so much simpler. When I first saw the apps in the Nintendo Direct streams, I worried scrolling through the content might get tiresome. Luckily that’s not the case. It would be nice if Nook Miles (a reward system for completing tasks) stats weren’t scattered across a large blank page, but the scroll sensitivity makes it easy to get to the bottom. It was a forgivable design even if it wasn’t my preferred one.

But the best part of the NookPhone was that everyone had one on the island. This made the use of the tool just as common as a net or shovel. Little touches like that make New Horizons stand out to me as a title that wants you to believe that every NPC is just as involved in day-to-day life as you are, as opposed to the sometimes stoic way they walked around until interacted with before. Watching them hunt bugs or sip some soda by the bonfire felt more like characters with things to do, just like you. 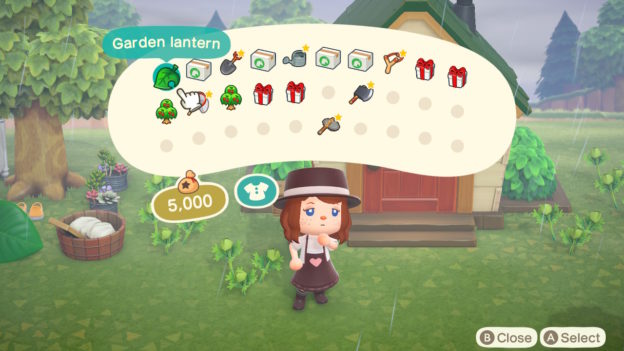 Animal Crossing: New Horizons is about rewarding you just for playing. This is something that they never managed to do in original games well (even though I still obsessively played). You earn Nook Miles for doing basic and extracurricular tasks, you earn Bells (money) for selling items, and at least for a while there’s an island to build up! The series has grown so much over the years, with various projects and things you can do to fill in the time, but at some point, everything does plateau. Your town looks how you want it, you run out of things to do, you’re bored of just fishing. New Horizons has you working towards something every day. And even when that eventually will plateau, the addition of Nook Miles gives you a constantly refreshing checklist of things you can do to earn more towards this point system that gives you special rewards and benefits in-game. 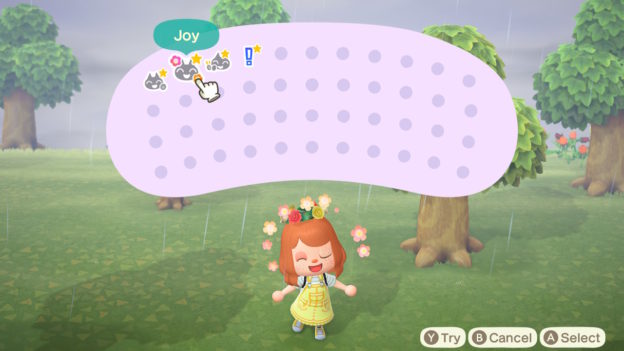 However, that’s also why it’s hard to tell which parts of the game will later have upgrades that change certain aspects of the game I consider “cons”.

An example: Item stacking is much better with this title, but for some reason, not all items stack to 99 in a bunch, while others will. Ideally, it would be great to just have infinite stacks, or at least 99 for everything. You can later upgrade your pocket space and get additional perks to make switching between tools easier, but as far as I can tell stacking doesn’t change yet. Why this was missed with all the other upgrades is beyond me, but again, it’s a game that’s hard to judge too quickly.

Nintendo Online subscribers can use the Nintendo Online app, on their Android or iOS device, to gain additional advantages while playing New Horizons. I was a bit skeptical as to how this would work, but after some messing around, I appreciate what the Nintendo Online app brings to AC. I liked scanning QR codes of tried and true favorite clothing designs from New Leaf. And downloading from the app to the game was instantaneous! Even more impressive, however, was the use of the app for in-game chat. 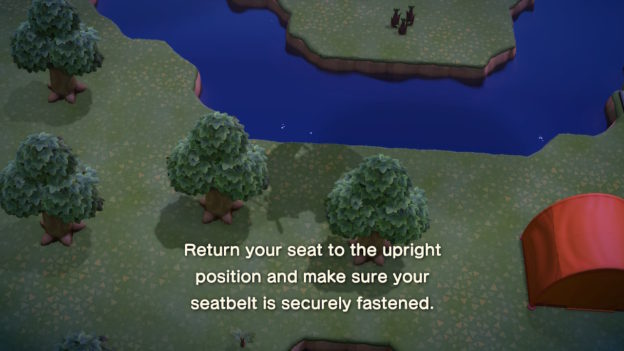 I should go on the record to state that players who are in areas with basic or lower network plans may not see the same multiplayer results. But for my experience, the multiplayer felt smooth in New Horizons.

(To any folks with children worried about the online play, Nintendo continues to make several reminders that this is a family-friendly game, and there’s now a reporting system for messages or behavior you don’t like!)

You can hit L while in-game to bring up the keyboard, but you’re beholden to having to type with the onscreen keyboard. That’s not my favorite experience, so having other options has been helpful! NookPhone even has a chat history in case you miss anything being said.

For now, you still have to make your own fun with friends, but the excitement of the new game was enough for us when we played together. 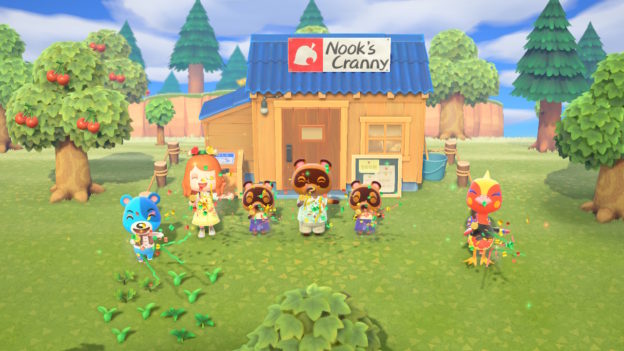 Animal Crossing: New Horizons hit every checkbox for me. I’ve seen this series transform for nearly two decades, and it’s become such an intense part of my best gaming memories. It’s clear in their handling of New Horizons that Nintendo truly cares about this series and understands its value to its audience.

I know what you might be thinking: Of course, I’m biased. But if this game had been a letdown for me, I’d tell you the truth and be sad doing it. This truly is an amazing game. My 9.5 ranking is only due to waiting to see what else might come out in future perks or patch updates to resolve some of my item handling and organizational concerns—which, with a management game like this one, is most of the day-to-day experience.

Edit: There are a few topics in this review I elected not to discuss—primarily when it comes to one-island-per-console and who gets to be the Resident Representative. Part of this was to keep the review as easy to digest as I could, another part was because the island limitations have been discussed before by many others. However, stay tuned for future articles that dive more heavily into these parts of the game.

Animal Crossing: New Horizons hit every checkbox for me. It’s clear in their handling of New Horizons that Nintendo truly cares about this series and understands its value to its audience.