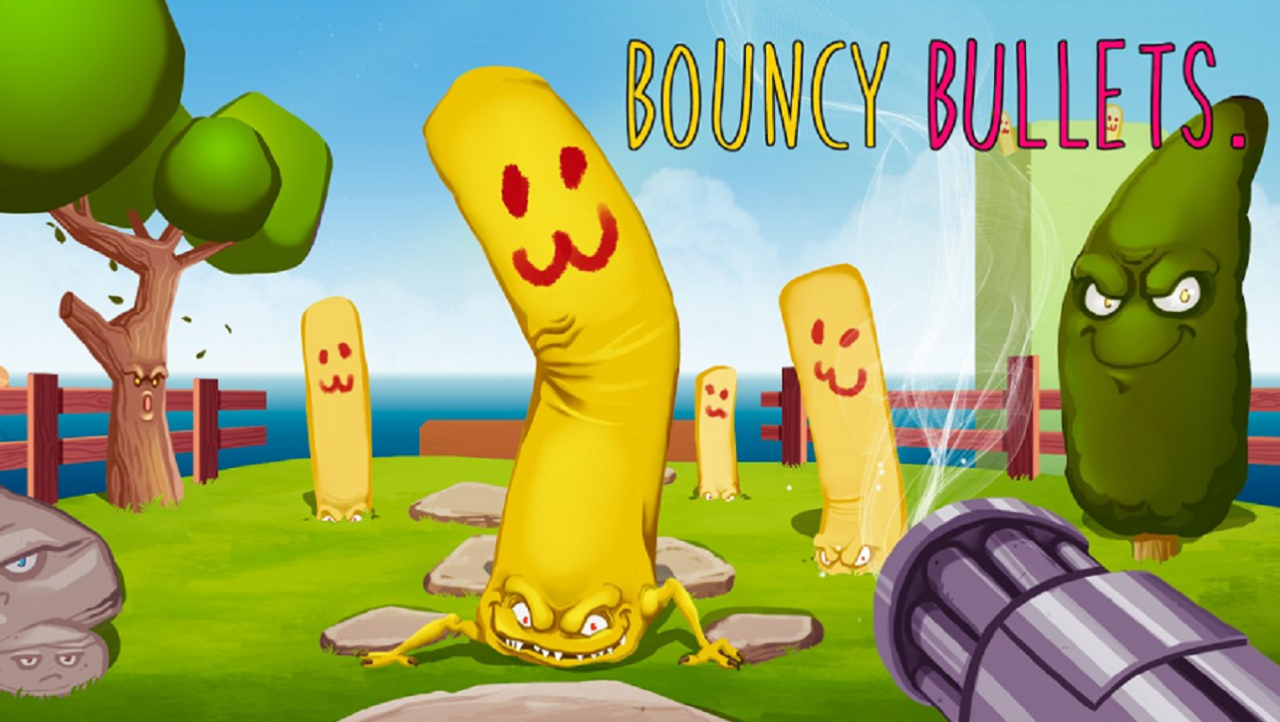 I was somewhat interested in Bouncy Bullets going in. Taking place “In a world where the sky is blue and water is pink, with icebergs replaced by floating ice-creams” sounded like a neat backbone to build a game off of. While the appearance is kind of cute, I have several concerns with the gameplay.

Bouncy Bullets bills itself as a mix of “First-person exploration and combat,” but I feel it’s really more about mastering speedrunning. It employs the usual, simple 3-star arrangement that Petite Games has in the majority of their titles. The harsh time limits required to earn every star, plus the frequent constant attacks, simply do not allow for exploring. Thankfully, this game does have online leaderboards, which I consider a must for a release with this singular approach. Don’t look for my name near the top of the boards, though.

The game offers 84 small levels, with half being labeled as “Special.” These are really just harder variants of the normal levels. In fact, they feel like the same levels I’ve already played, just with more enemies. So, nothing special about them due to the lack of variety. However, they do allow the titular bouncy bullets to come into play more. With additional enemies, you’ll need to fire more of the underused bullets. Of course, only one type of enemy (out of only three) must be defeated with bullets that bounce.

While Bouncy Bullets has bright and colorful visuals, its soundtrack is no selling point. It didn’t get me moving, except to lunge for the mute button. Not every track is bad, mind you, but the one that sounds like a record being played backward really does drag down the audio experience!

Bouncy Bullets does plenty more to annoy me. It’s 100% linear. It has levels that will kill you in under one second—this is a real pet peeve of mine. By far the most annoying thing has to be the control issues, reminding me of first-person platforming in its infancy.

The controls are subpar for a first-person platformer. This is something the jumppad really drives home—bouncing higher is a necessary but iffy proposition when you don’t know where you’ll land. It’s never good when the bulk of a game’s challenge stems from controls. Adjusting the sensitivity way down helps some, but these controls aren’t a good mix for the action with a focus on difficulty and speed.

Ultimately, what saves the game (to that extent that bumping it to an average score saves) is the way I chose to tackle it. Quickly losing interest in replaying these levels repeatedly to master them, I started taking my time. I explored, even though the game worked against me in this regard. I picked off enemies from a distance rather than trying to speed past them. I patiently adjusted the camera to jump with a precision the game doesn’t otherwise offer. Is my style of play in harmony with Bouncy Bullets final build? Nope. But it’s the way I had some fun, making me realize that Petite Games would’ve been better off taking this foundation and building a proper 3D platformer.

A recurring theme in my reviews for Petite Games releases is the thought that they’re just an element or two away from being great. With that in mind, I hope the developer takes more time with future titles; something bigger, more open, with lots and lots of player options. Get out of the comfort zone and ditch the linear, 3-star setup.

Bouncy Bullets really isn’t a good game, but when I changed my style of play I did find a bit of fun. As a speedrunner I don’t think it’s satisfying trying to master these levels, but there are some possibilities beneath the surface for those willing to look. Yet, it still feels amateurish in ways. With subpar controls, I’d take a pass until a patch or sale, even with the low price.

For a different take on some shooting action, check out Super Destronaut DX, also from Petite Games/Ratalaika Games. If mastering your way up action leaderboards is appealing, I recommend Wobbly Tooth’s Toy Stunt Bike: Tiptop’s Trials for the same $4.99 price.

Bouncy Bullets really isn’t a good game, but when I changed my style of play I did find a bit of fun. As a speedrunner I don’t think it’s satisfying trying to master these levels, but there are some possibilities beneath the surface for those willing to look. Yet, it still feels amateurish in ways. With subpar controls, I’d take a pass until a patch or sale, even with the low price.