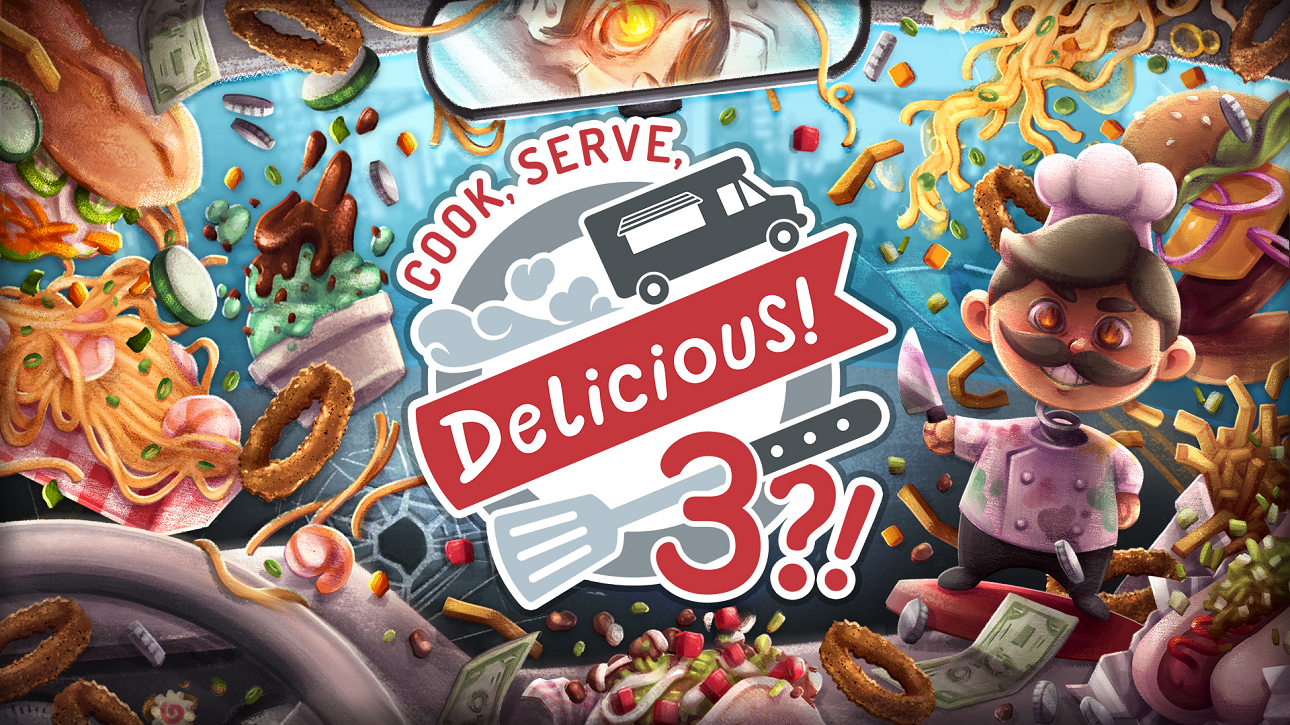 Cook, Serve, Delicious! 3?! is a tale of two games for me. As a solo experience, I found the food truck action had a bit too much intensity (and repetition) to entertain me for long stretches. Co-op is where its real strengths lie and how I recommend it, especially for players new to the series.

This game has a plot where you’re driving your food truck across the war-torn United States of the future. What exactly does this add to the game? Nothing that I noticed in 20-plus hours. It’s a curiosity rather than an asset. I kept waiting to see the story get taken advantage of, but no. So that’s one plate I’d return to the kitchen.

That oddity aside, getting on the road to serve customers is where the game is proper. There are over 380 levels inside the cramped food truck. As you progress, you’ll gain access to dozens upon dozens of dishes. Memorizing their preparation patterns is one thing, but some seemingly straightforward plates are more complicated than you’d think. Each additional step is a chance to mess up an order. If there’s a way to discard a messed-up plate mid-preparation, we haven’t found it. You have to finish it, then chuck it. You’ll also need to keep an eye on dishes that can burn or those with shorter shelf lives. Are you asking for a challenge?

You’ll be pressing a lot of buttons for each dish in a QTE-type manner. For better or worse, the touchscreen is inactive in Cook, Serve, Delicious! 3?!. But I ended up rarely playing in handheld mode anyway. A minigame should’ve been added where you drive to the optometrist. Many of these icons are abbreviated and tiny! So I recommend playing on a television, which is how you’d be inclined to play co-op anyway.

I should note that co-op – where a friend can hop in any time – is worth the effort at communicating and makes the campaign more enjoyable. Even if you don’t want to have a controller in hand, a second can act as an expediter. You’ll be shouting what orders need prep, which ingredients to add in complicated dishes, when an order needs pulling, or when it’s ready to be served. The latter can be done en masse with a flick of a Joy-Con stick, which is handy.

Even with two players, the challenge remains. Chill mode has customers with infinite patience, so that they won’t get angry from long waits, but they’ll still get mad if you serve the wrong food or food not cooked well. Of course, instinct is always to act quickly, so this is hardly a relaxing mode, just slightly less intense. Chill mode only lets you earn up to a silver medal, which slows up your access to more levels. And it doesn’t take many mistakes to have that fall to bronze, especially when a handful of customers turn into dozens upon dozens.

While this doesn’t have the ease of a Cooking Mama game, there’s still plenty to enjoy. Reading up on each dish, including many I was unfamiliar with, made both my wife and I hungry. Decorating and upgrading your food truck is rewarding, and the latter helps in optimizing your time with extra prep and holding stations. Cook, Serve, Delicious! 3?! can be sort of addictive and has made us improve our gaming communication skills—lots of exciting back and forth and even some laughs. And then there’s the music.

I feel the tunes deserve their own paragraph as they add so much to this game. Jonathan Geer (Owl Boy) is back with another varied soundtrack. His opening prologue tune does a better job of establishing the setting than the actual story does. Some of the compositions have vocals. Funky, jazzy, but always happy. Some have a real zeal, while others are more tranquil but no less impressive. I suspect it’ll prove a memorable, unique mix of styles.

As a solo game, I admit this one won’t endure for me as a series newbie. It’s just okay, at best. But if you’re a returning player or wish to experience it in co-op, there’s positively good fun to be had. You can lose track of time, making all manner of tasty-looking dishes while bobbing your head to the great soundtrack. Cook, Serve, Delicious! 3?! comes recommended or executive and sous-chef duos.

As a solo game, I admit this one won’t endure for me as a series newbie. It’s just okay, at best. But if you’re a returning player or wish to experience it in co-op, there’s positively good fun to be had. You can lose track of time, making all manner of tasty-looking dishes while bobbing your head to the great soundtrack.