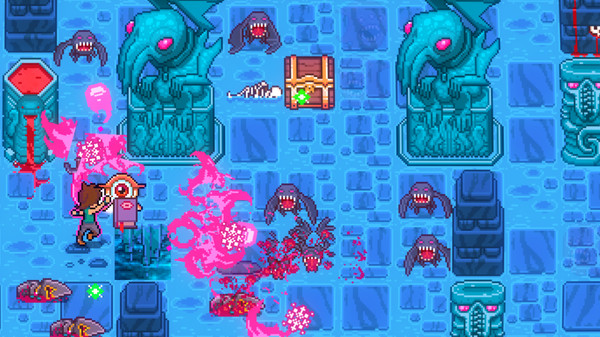 Deathstate was originally released on Steam in 2015 before coming to the PS4 two years later. More recently, it was finally added to the Nintendo Switch’s vast and ever-growing library. Deathstate’s developer, Bread Machine Games, define the game on their website as a “single-player, bullet hell shmup, RPG with roguelike elements.” All this is true, making it very clear what the game is, from the very first moment you embark upon your first run. It never hides or pretends to be anything that it’s not.

The plot, despite being wild, is reasonably simple: Professor Elinberg is missing and, in his wake, he has left a portal open which leads to an endless abyss. This is where you come in. It’s your job to figure out what happened. In order to do this, you have to enter a deathstate — which is essentially an astral projection — allowing you to explore procedurally generated levels, tackling whatever Cthulian-influenced horrors and skeletons these levels will throw at you along the way. Actually, perhaps it isn’t all that simple, but luckily it’s also not that relevant. If you’re playing Deathstate for the story you’ve picked up the wrong game, as it acts as nothing more than a justification for what’s happening. However, if you’re playing Deathstate for a good challenge and a vast amount of unlockables, then you’re in for a treat. 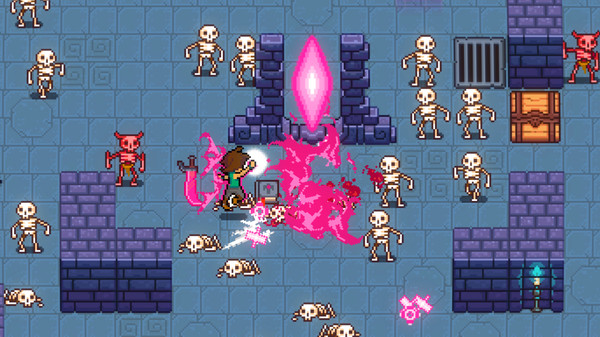 Deathstate has the simplest of controls. The game even takes away the option to shoot and instead begins shooting automatically as you get closer to enemies. Your fire will home in on the enemy closest to you. Although only a small mechanical difference, it drastically changes the way the game is played, putting the emphasis on dodging (with an assigned dodge button/stick) the hordes of enemies as they attempt to swarm you. The game’s controls being simple does not however mean that the game itself follows suit. Deathstate, even on the easiest difficulty (normal), is quite a considerable challenge, with the hardest difficulty bordering on torturous to play, making Deathstate a good challenge for even the most hardened of gamers.

During your time playing the game — which will vary from player to player, dependent on skill — there’s a huge amount of unlockables to obtain. Deathstate boasts a variety of characters that can be unlocked by reaching different goals. Each character also has their own ending in relation to how they have found themselves in this nightmare, in another attempt at adding an extra dimension to the game (no pun intended).

Along with the character variety, there are also different items to grab on each run to amp up your character — weapons, organs, grimoires, and potions. The different pick-ups will change the way you play, from increasing your movement speed to adding a constant laser beam to your arsenal, on top of your base projectile. Health is also dropped semi-regularly, too. All of this ensures that each run is a unique experience, different from the last in every way. 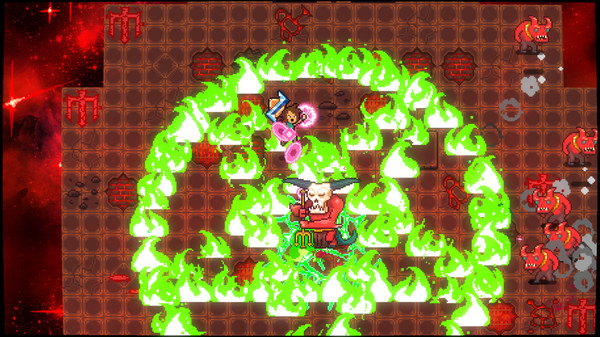 Although Deathstate is intentionally challenging, there’s a lack of guidance through each stage. There’s not even a slight hint as to which direction you should be heading in, and the camera being so zoomed in is an obstacle in your mission to find out. These issues are minuscule in the grand scheme of things, but there were moments where I would find myself aimlessly roaming the stage, unaware of where the exit could be. It should be noted that this is no fault of the art style, which compliments the game.

Deathstate may not be for everyone, but for roguelike fans it will be a welcoming entry to the budding genre, consistently offering a new challenge even for the most seasoned gamer.

Challenging and unique, Deathstate blends an RPG narrative with a roguelike style and mashes it up with some classic Cthulhian horror. 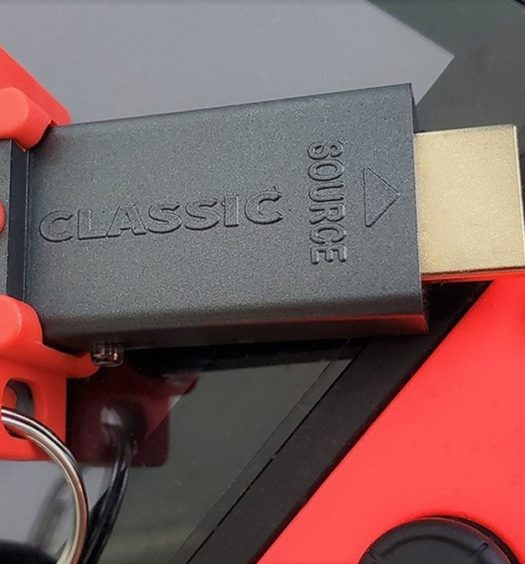 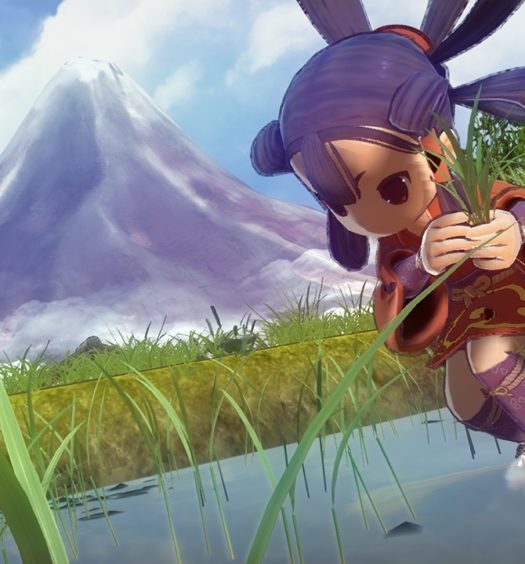