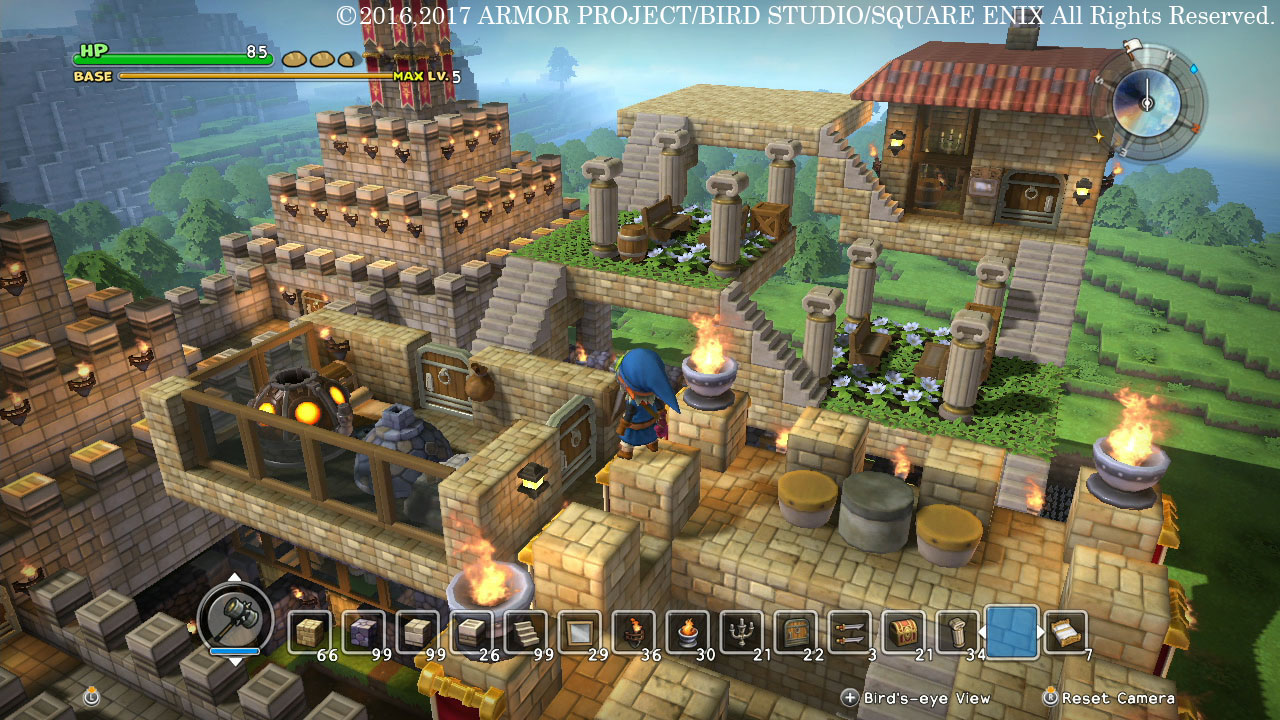 If bashing monsters, collecting loot, and creating your own world are three features you love in a video game, then Dragon Quest Builders is for you. I was cautious when diving into the world of Alefgard, but the countless hours I’ve sunk my teeth into are tasty enough to keep me coming back to Square Enix’s charming sandbox of an RPG.

Dragon Quest Builder’s story is a simple one. Dragonlord, from the original Dragon Quest, has taken over the land by littering it with monsters. The hero of this story is the only human with the gift to build. It becomes the player’s job to re-create the world destroyed by Dragonlord’s minions. How you do so is up to you.

One of the main factors of that made me love this game so much was its EXP system. You will only get stronger by re-building Alefgard. You can destroy enemies all you like, but doing so will never level up your character. The only way to do so is by completing villagers requests which have you fetching new materials. Those materials grant you new blueprints for your town’s decorations inn, kitchen, workshop, and fortifications. Coming back to town and creating new expansions levels up your town, which will give you new villagers, quests, and armor to create to help you and your town flourish to their fullest potential. You can even create fortifications to help defend your town from an attack.

The game gives you plenty of freedom to stray off from the path as much as you like. You are free to roam Alefgard, collect an abundance of resources, and build to your heart’s content without progressing in the story. This is where I saw the port on Nintendo Switch shine. Being able to boot up the game and grind some extra materials was simple, yet enjoyable. I even stumbled upon some side quests by being curious about what was around the corner. The combat is perfect for quick sessions too, but don’t look for an in-depth battle system anywhere in this game. It’s just not there.

I haven’t been able to dabble with Dragon Quest Builders on other consoles, but I will say that it runs buttery smooth in docked and handheld mode on Switch. There did seem to be a slight dip in performance in handheld mode, but nothing noticeable to take away from the game. There’s also no online to show off your creations, and no additional content added to the Nintendo Switch version. Although online support isn’t offered on other versions, it would’ve been nice to see some sort of amiibo support. Having a statue of Link in the middle of my town would’ve been a nice little bonus for Switch owners.

Overall, Dragon Quest Builder’s gameplay plays to the strengths of the Nintendo Switch’s intended purposes. There are countless hours to be had here, and players with extra creativity will find reasons to come back even after the land of Alefgard has been restored. Fans looking for additional content or an in-depth battle system might need to look elsewhere. However, Dragon Quest Builders is great for both long and short bursts of gameplay, gives the player freedom, and rewards you for doing the game’s main objective: building.

Overall, Dragon Quest Builder’s gameplay plays to the strengths of the Nintendo Switch’s intended purposes. There are countless hours to be had here, and players with extra creativity will find reasons to come back even after the land of Alefgard has been restored.

A proud graduate of Temple University. First memories of video games are playing SMB3 at my Grandma’s house. Favorite Nintendo console is the SNES, favorites series are The Legend of Zelda, Metroid, Animal Crossing, and Earthbound. Always down for a solid platformer or RPG.
Comments
Submit a Comment