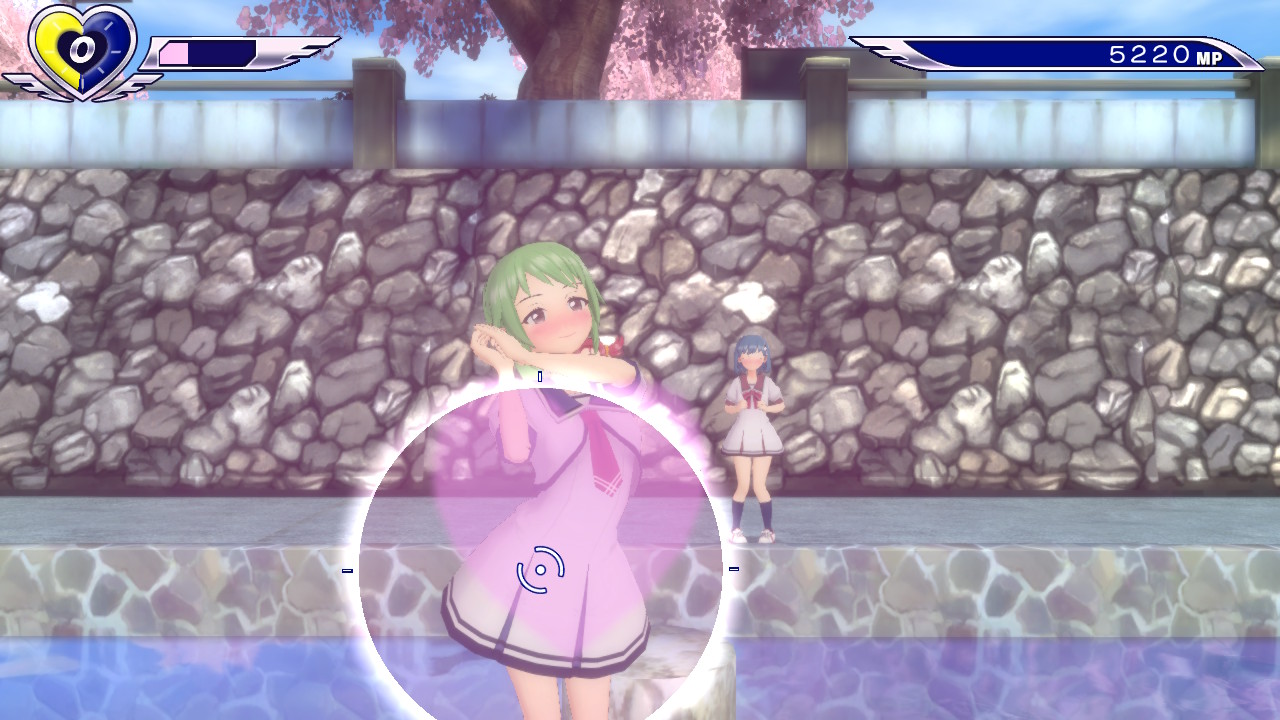 Gal*Gun Double Peace is a shooter-on-rails game with light elements of a dating sim. You play a high school boy who gets shot by a powerful love arrow, causing him to become so insanely popular that girls are attacking him to declare their love. You have to chill them out with “pheromone shots” that put them in ecstasy until you can find your true love. 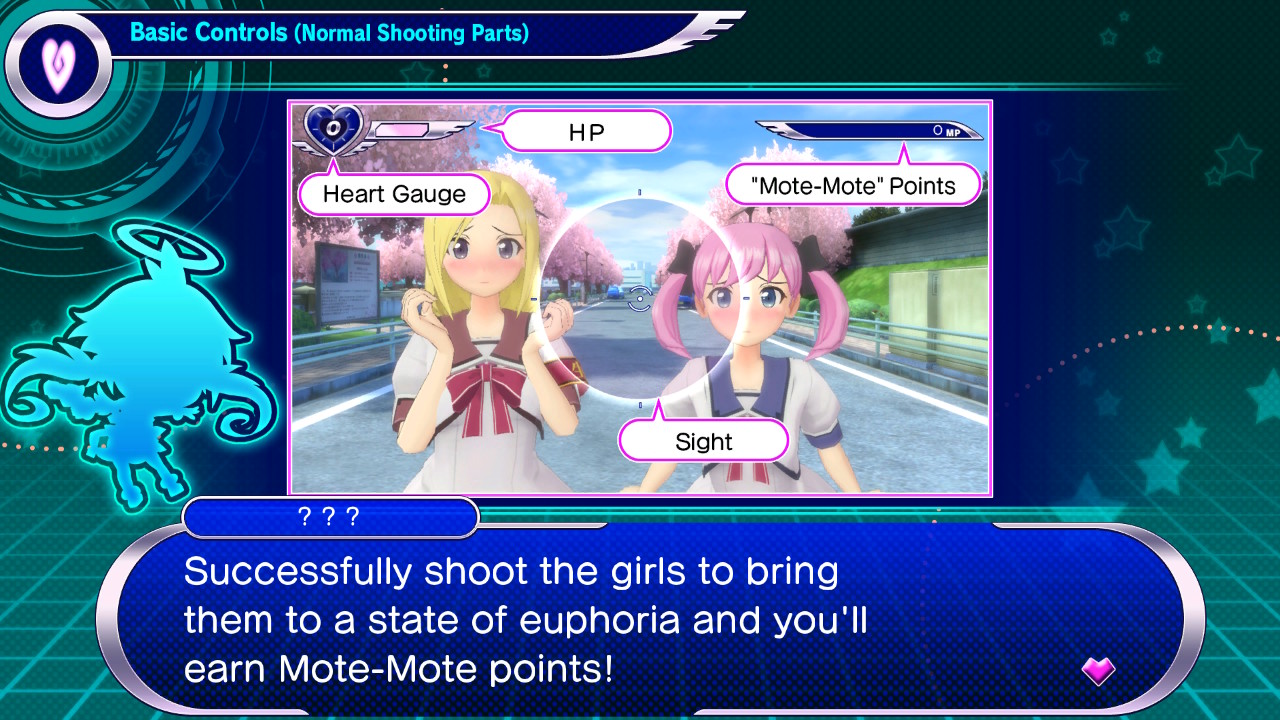 A key element is that you have a zoom-in mode that allows you to see the bras and panties of the girls and teachers. You can also collect their measurements (bust, waist, and hips), allowing you to unlock modes where you can pose them in various costumes. 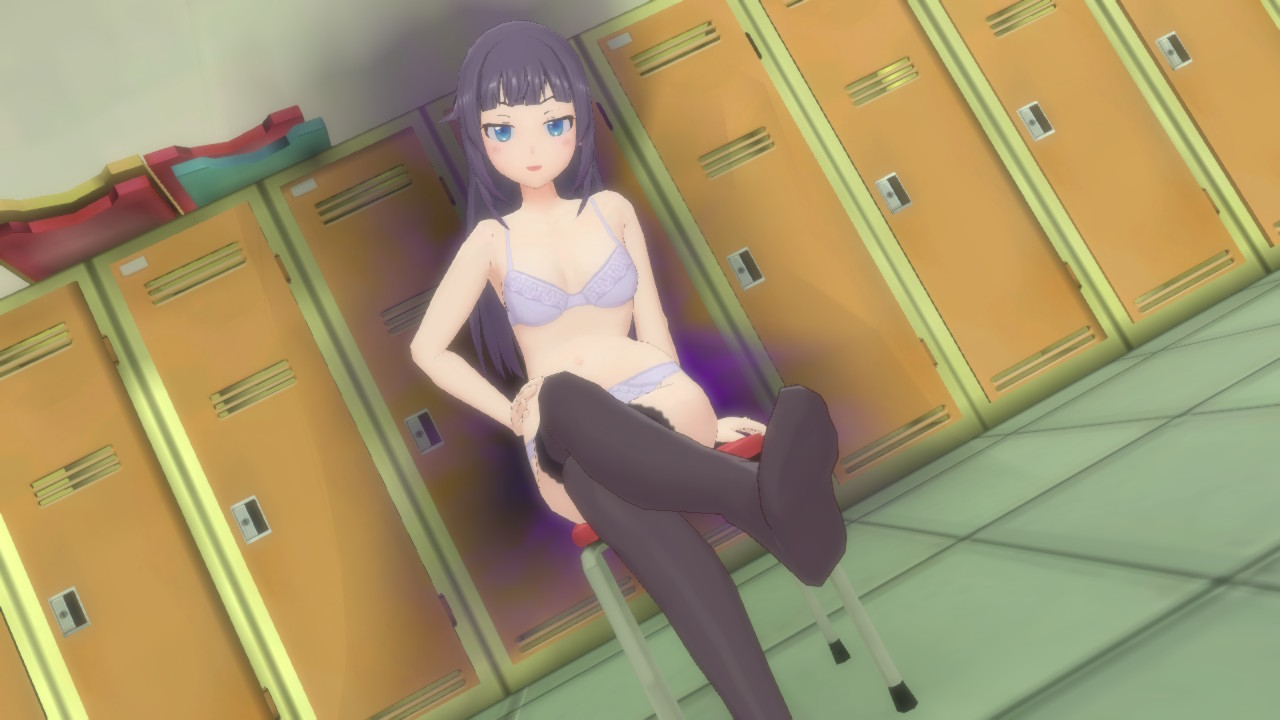 The game itself isn’t hard; if you get knocked out, you can use a small amount of XP (called mote-mote points) to continue. But playing the game well is challenging, as you try to juggle the waves of women shouting their love (which you can shoot down), handing you notes, kissing you, or throwing you to the ground and stepping on you, with getting their measurements and searching the background for special bonus items.

Gal*Gun Double Peace is a game that’s meant to be played repeatedly so you can search new areas of the school, get more and more information on the girls, and figure out what dialogue decisions will lead you to true love.

The lightly smutty aspect of the game is its big selling point, but if you get into the mechanics of playing it successfully, you’ll get a lot of entertainment out of it. The gameplay is repetitive by design, as you try to learn the best way to maximize your score based on Damage (their word), Time to complete the stage, and Accuracy of your shots.

And Now, Some Thoughts

The other game I’ve been playing a lot is Assassin’s Creed Valhalla. In that game, you play a viking who  builds a community by going on raids, attacking monasteries, killing Christians, and burning down their homes. You kill a lot of people in lots of spectacular ways, often ending their lives with surprise attacks that offer them no chance of defense.

I felt no embarrassment buying or playing Valhalla; it’s a AAA game in a wildly popular and long-running game series. But when my editor told me there was another “mature” game he wanted me to review (after my reviews of Senran Kagura Peach Ball and Omega Labyrinth Life), my ego piped up in my head.

Am I becoming the Japanese Boob Game Guy? 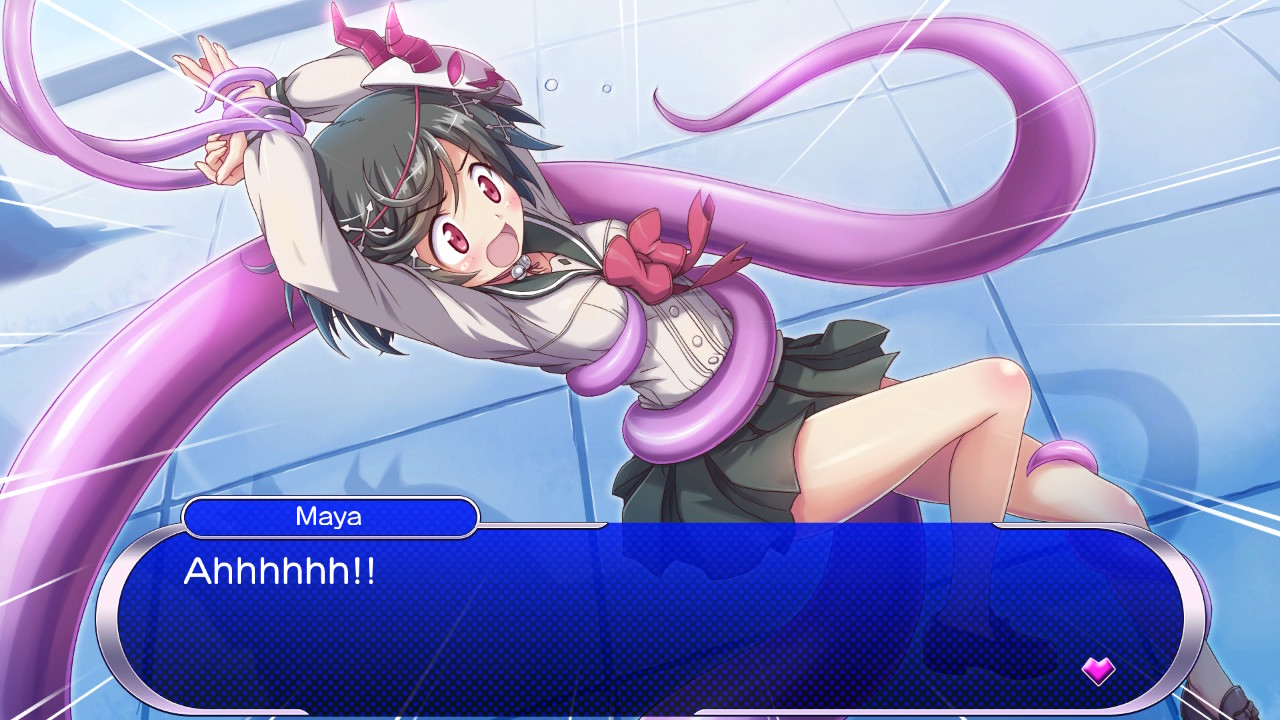 Answer: almost certainly. And after some consideration, I am OK with this. So let’s really dig into the context of Japanese Boob Games.

Lenny Bruce once said he’d rather have his children watch a movie about two people making love than two people trying to kill each other. He said this because it needed to be said, because it’s not obvious. It runs contrary to the way America provides pop culture.

Now, there are larger discussions to be made about the Male Gaze, the objectification of women in general, and the fetishization of females in games and anime. 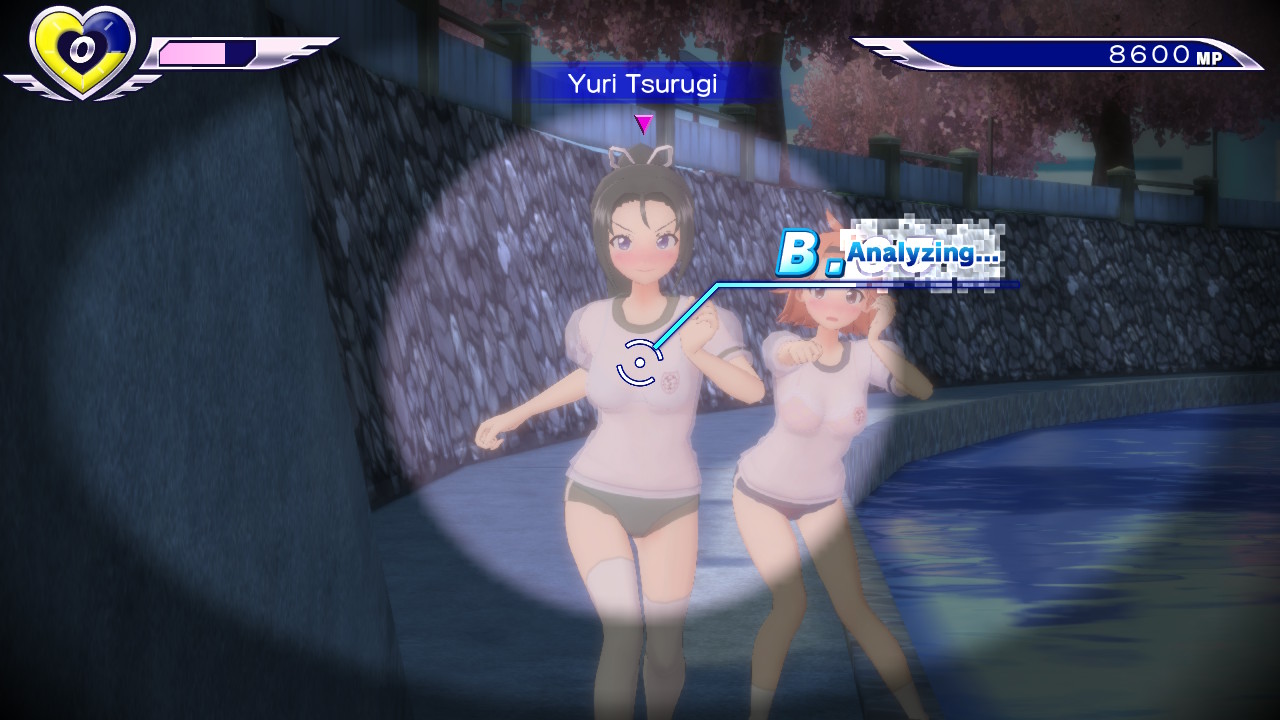 Others will lead these discussions better than I.

But what I’d like to point out is that while learning the measurements of the female characters in the game is certainly objectification, you are at least learning something about the NPCs in the game. Further, one of the special objects you can collect in the game are pages from the Student Handbook which tells you their names, their interests, and their blood type (a staple of anime personality compatibility). 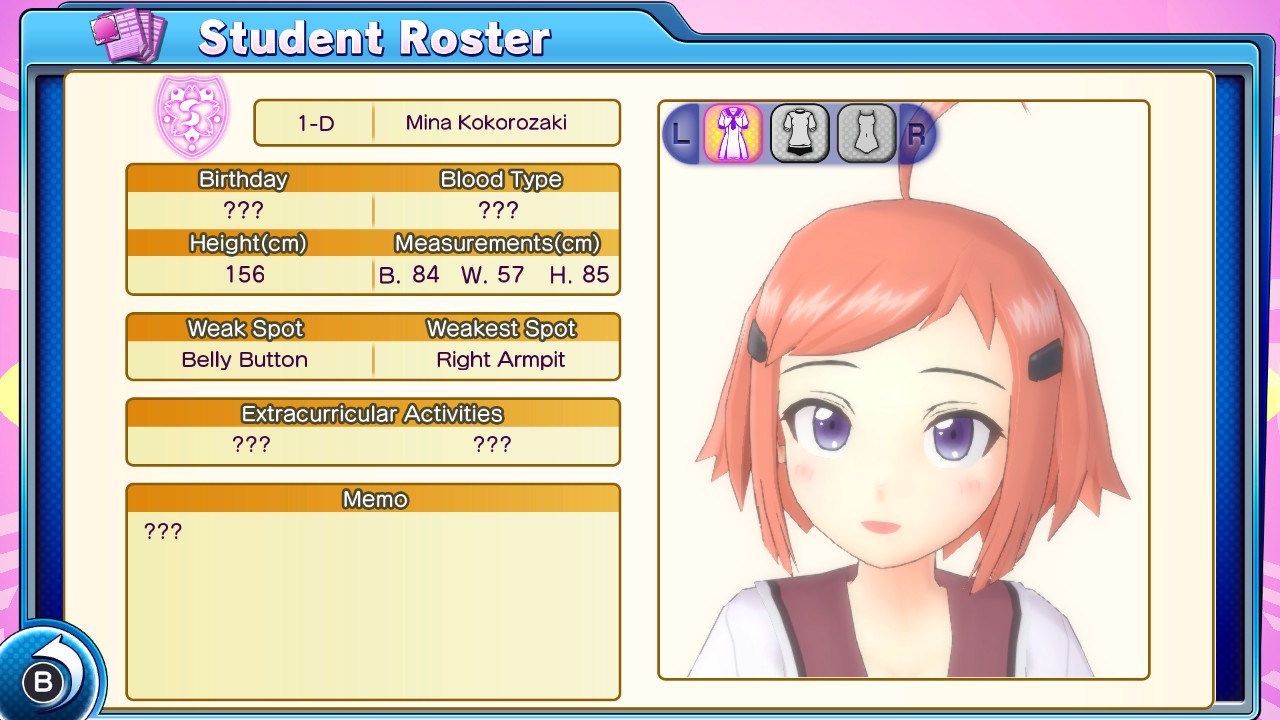 Contrast this with Valhalla, in which you attack villages and religious settlements and slaughter enough people to fill Wembley stadium, and unless they’re a mini-boss or higher, the only thing you’ll learn about them is the kind of weapon they hold.

Further, in the relationship part of Gal*Gun, you have to learn (or look up online) what dialogue and attributes you need to emphasize to appeal to a particular girl, and you’re not guaranteed a Good End unless you play the game well. 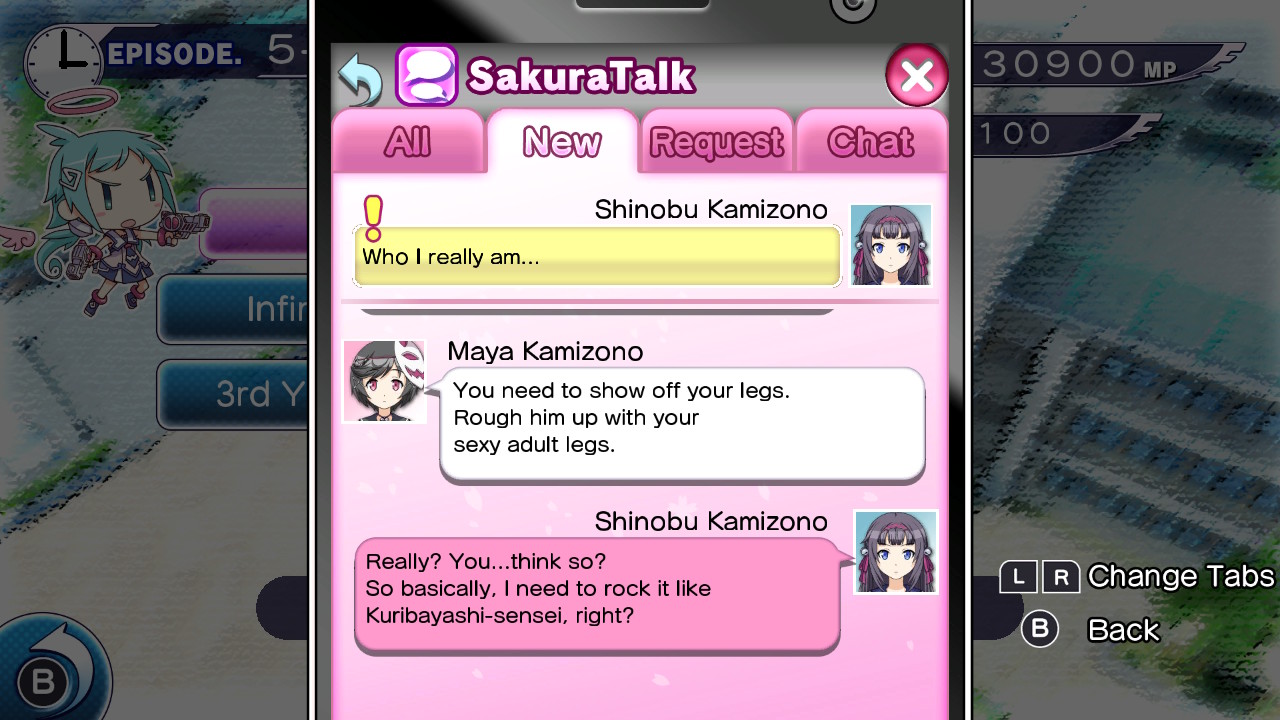 In Valhalla, the “romance” options are laughably shallow—you go on one or two missions and you gain the option to kiss someone, and “sleep” with them in the sense that the camera fades to black and you wake up in your room, fully clothed.

I mean, it’s weird that you shoot girls with pheromones to send them into ecstasy so they’ll scream in joy, leave you alone, and disappear. I get that. But it’s also oddly…nice that your goal is to cause pleasure rather than murder.

The other really weird thing about the game is that while you—Japanese Boob Game Guy—are playing this game to watch digital representations of bras and panties, the narrative keeps reiterating the fact that it’s wrong for you to want it. The angel who shot you with the super-powerful arrow tells you not to use it for pervy purposes, and should you choose a salacious dialogue option (lewdness is one of your attributes), you’re almost certainly going to get slapped down by the character you’re talking to (though it may be the right option to advance the romance).

Oh, and I forgot to mention that if you dress up a character or set of background characters in the Dressing Room area, they appear that way in the game. Want to see a school full of women in cardboard robot costumes? Here’s your chance. 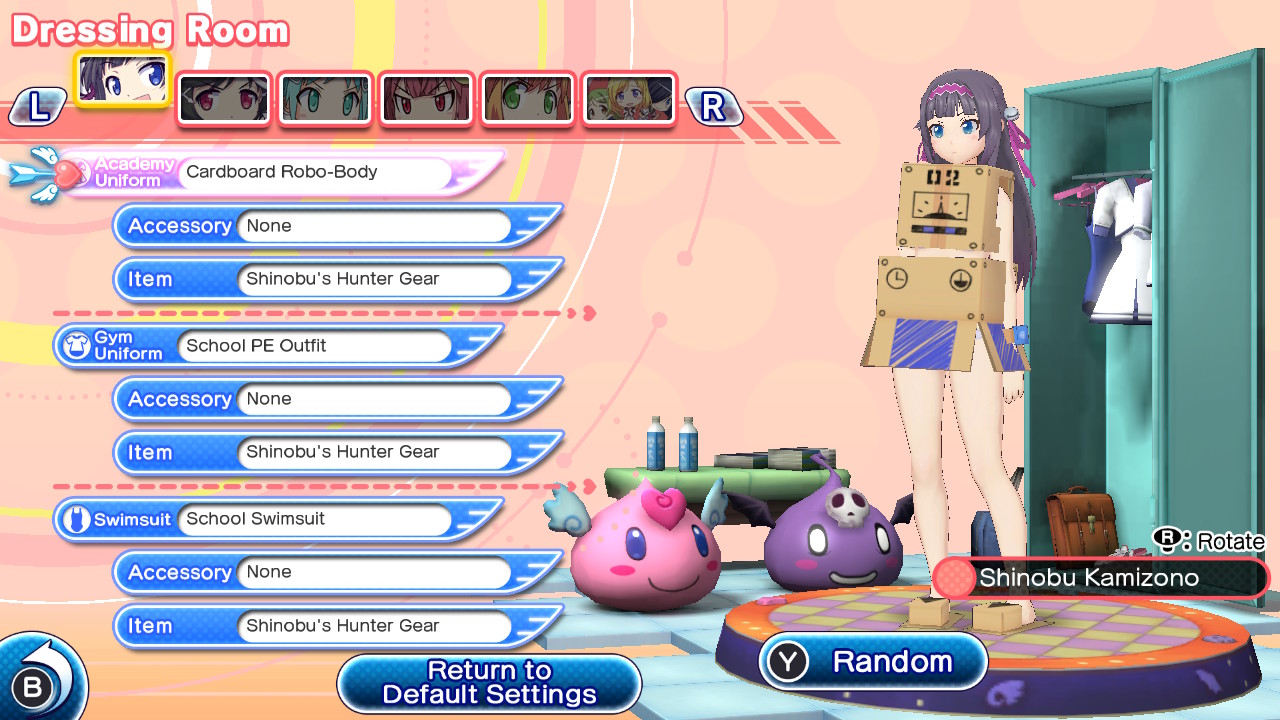 I’d feel self-conscious playing Gal*Gun Double Peace on the bus in a way that I wouldn’t with a violent game. But beyond the smutty aspects of the gameplay, it’s a solid on-rails shooter that does take practice to play well and is fairly challenging if you’re the kind of person who has to unlock 100% of the achievements.

Gal*Gun Double Peace is an on-rails shooter with light elements of a dating sim. The lightly smutty aspect of the game is unashamedly its big selling point, but if you get into the mechanics of playing it successfully, you can get some solid gaming entertainment out of it.