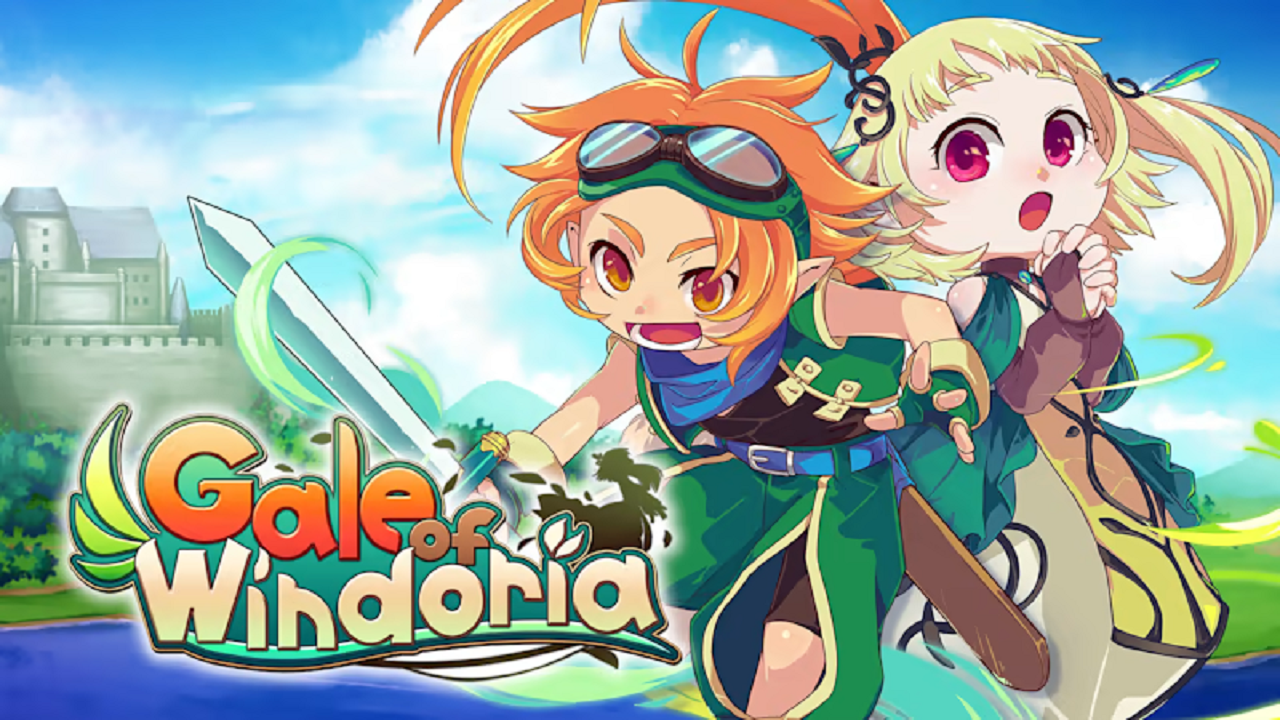 Hit-Point is back with another RPG, Gale of Windoria. Despite what the clickbait headline on another Nintendo site said, there is nothing Zelda-inspired about this. It’s a traditional RPG, the kind KEMCO is known for publishing. They’ve published so many that we can’t possibly keep up. And truth be told, they can blur together.

Often, what elevates one of these titles is the plot. Sadly, Gale of Windoria’s story is uneven. It starts with a mother telling “a story of legend” to a toddler. You’ll soon take control of a young boy named Shan. Eventually, alongside his magical band of elemental allies, he’ll find himself trying to save his friend from being a live sacrifice and the world from a cult and evil deity. It has its moments, more so in the earlier goings, but it doubles down on cliches the further you go. 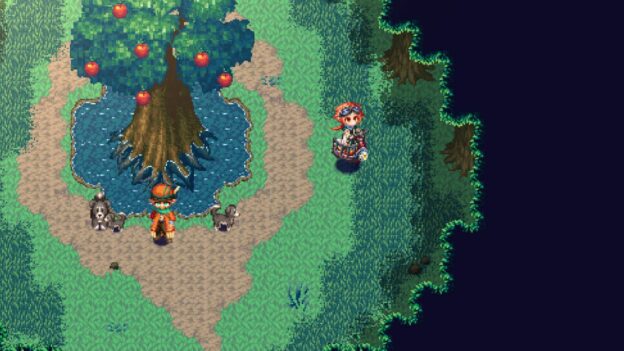 Gale of Windoria seems to have its sights set on a form of technomancy/magitech hybrid. Still, other games from this developer/publisher duo have pulled it off better. Honoka, the fire maiden, says it best: “Unknown technology, eh…For me, that’s just like magic”. The balance definitely tips in favor of the latter, often in goofy ways. Even Shan admits he can’t follow it all.

Deities are used as minimal-effort story tropes. Your robot Gachu? It’s not enough that he’s armored, full of circuits, and has a mechanical brain; he’s also a golem powered by magic. Your flying ship? Scientific cutting-edge tech is cool, but it needs a deity spirit to power it. Not only does this sell the tech angle short, but it makes satisfying explanations rare. Slap a deity on it and call it a day. Some of the bush-league writing can be eye-rolling at times. 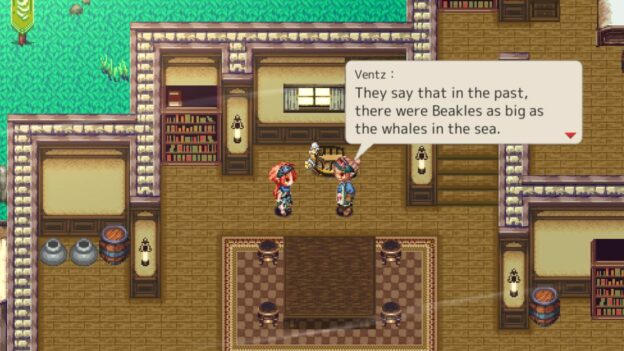 In terms of gameplay, you have your standard turn-based battles and dungeon crawling battling all manners of mutants and monsters. The elemental angle comes mainly via your allies. While Shan can only use wind, Bathlet, for example, makes ice platforms so you can navigate over water. Gimmicks like these are helpful for opening paths in the dungeons. After each enemy encounter, your health and skill points revert fully, as seen in other Hit-Point RPGs like Monster Viator. So no inns to sleep at or potions to buy, making for a breezier adventure. The mini-map (in many but not all KEMCO-published RPGs) is also appreciated for exploration. Whether these elements make the game err on the side of ease is subjective. 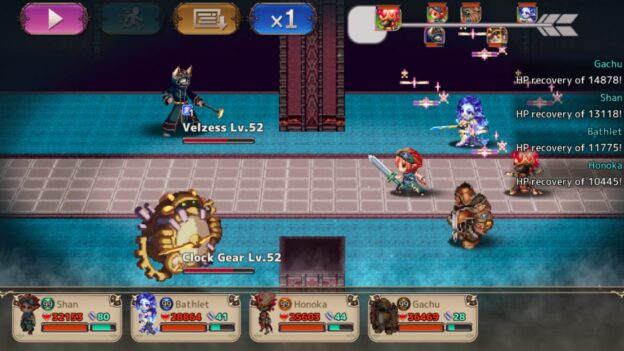 What can make the game objectively easy is the usual KEMCO DLC. I’ve played many games from this publisher, but this was the first time I decided to check one out. So I went for “Experience x3, where experience gained in battle is tripled, at $4.99. Short of the second wave of the final boss (which I won’t spoil), I thought the game was too easy. Saving your money and grinding the traditional way might be preferable. If you get bored, use auto-battle (though the CPU isn’t bright); it’s not as bad as I’ve seen in others.

The relative ease leaves me with little to say about the Quartz battle system. On paper, you navigate through cluttered menus and small icons to raise your stats, acquire new skills, and so forth. But in practice, it’s rarely needed. Once I landed on a series of go-to moves, my desire to experiment weakened. It wasn’t until that last boss that I felt inclined to properly invest in it due to the difficulty spike. 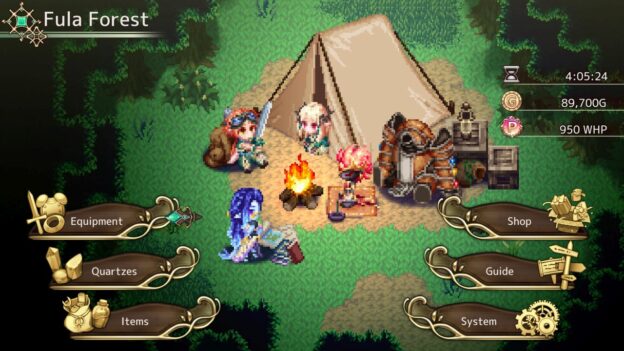 My feelings are similar to Machine Knight (also from the same dev/publisher duo) so allow me to quote from that review. (substitute board for Quartz) “There’s depth potential for those wanting to really delve into it, but at the same time the board can also be pushed more towards the background and fiddled with just on occasion.” Were this my first KEMCO-published RPG, I probably wouldn’t bat an eye. But after playing so many, I was left hoping for more. Strangely, there’s no post-game content in this one, further eliminating the need to dive deeply into the battle system.

Graphically, Gale of Windoria is a reasonably attractive game from this dev/publisher combo. Hanahana (the Land of Earth) especially impresses with its lush greenery. Occasional scenes of background imagery give a pleasing sense of scope. The characters all differ in appearance, reflecting their elemental background. The lack of character portraits hurts, though. In theory, fun screen art could compensate, but these screens are so few and far between they fail to make much of an impact. The supporting music doesn’t always fit (some smooth jazz), but I liked it. I even got a positive comment from my wife when she heard it. Aesthetics, while typical, are done well for what they are. 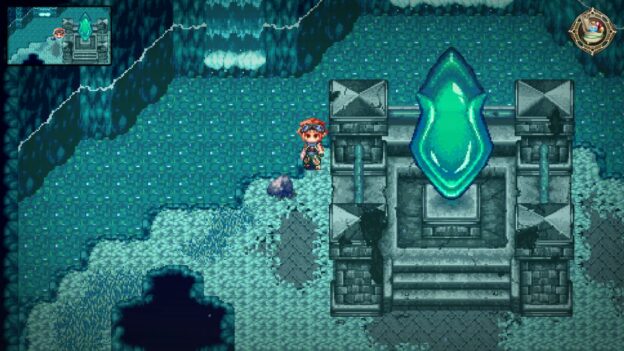 Overall, Gale of Windoria is one of the more average RPGs I’ve played. The story is uneven, the battle system options largely unnecessary, and the lack of post-game content makes it an outlier amongst its contemporaries. So while the breezy familiarity can hold some appeal for fans, if you’re looking for stuff you haven’t seen before, I’d look elsewhere.

Where should you look? How about starting with Crystal Ortha, another Hit-Point RPG published by KEMCO.

Overall, Gale of Windoria is one of the more average RPGs I’ve played. The story is uneven, the battle system options largely unnecessary, and the lack of post-game content makes it an outlier amongst its contemporaries. So while the breezy familiarity can hold some appeal for fans, if you’re looking for stuff you haven’t seen before, I’d look elsewhere.