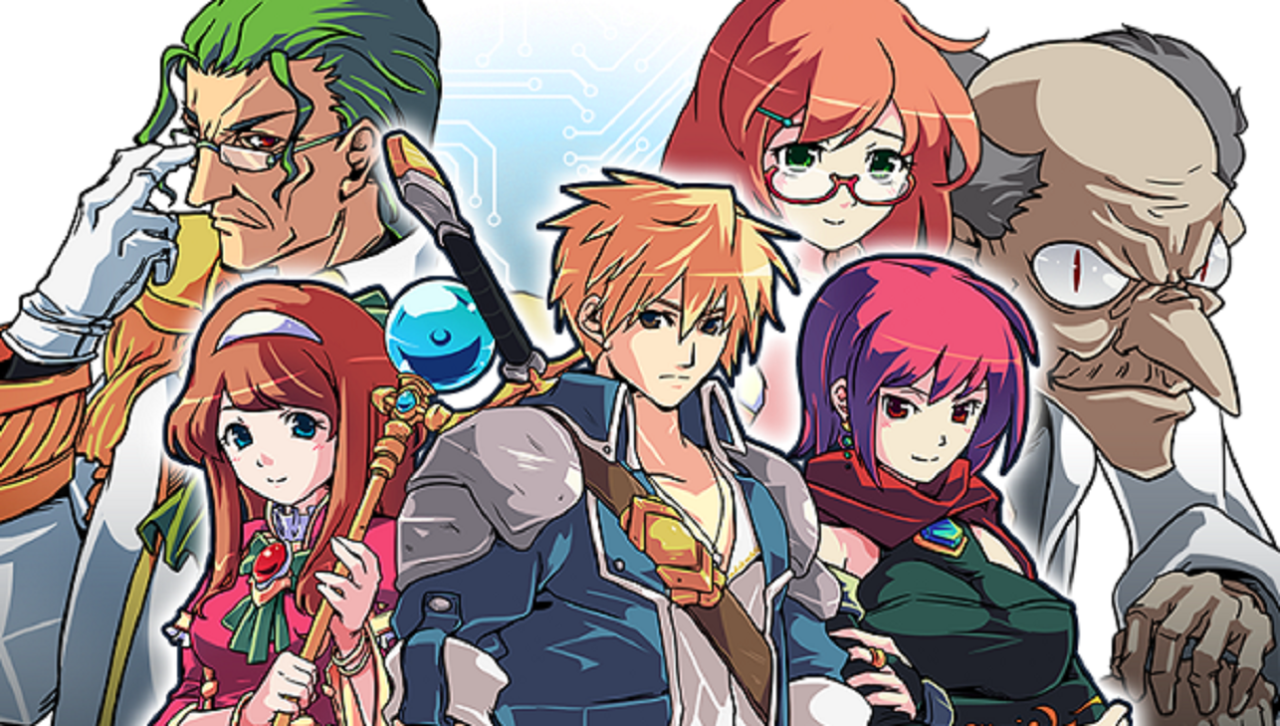 Machine Knight is the latest 3DS RPG published by KEMCO. Developer Hit-Point has crafted an adventure based upon an energy crisis. It’s like the 70s, but with better clothing and less disco. Actually, the sci-fi story is one of the game’s stronger elements, which helps it stand out from other KEMCO fare.

The game starts off cryptically, but intriguing nonetheless. In short, a scientific failure means the earth is propelling towards the sun due to altered gravity. The situation can be rectified if stable atmospheric energy can be furnished. You play as Frain, who has “traveled somewhere no one has ever been using methods which no one has ever tried before” in hopes of finding a solution.

There is a lot of story early on, but it’s fun seeing the protagonist try to explain technology to people who have no concept of it. Things like chemistry must be likened to magic for his new companions to, sort of, get a sense of it. I only wish there were more primary characters to interact with, which would open more opportunity for such exchanges.

Each of the three leads (Frain and his two female allies) have their own “Machina Board” which allows you to customize things like classes and skills. There’s depth potential for those wanting to really delve into it, but at the same time the board can also be pushed more towards the background and fiddled with just on occasion. Such freedom is appreciated.

The freedom also extends to missions. While there is Frain’s main quest, there are several side ones as well. In fact, don’t be surprised if you find yourself juggling a handful of quests at once. This degree of nonlinearity is welcomed, although it does lead to backtracking. The quests are easily sorted on the touch screen. The touch screen also shows a map, which aids you in finding helpful items. Actually, it’s a little too helpful, as item areas are clearly visible, similar to the earlier Crystareino.

While the touch screen use is fine, you’ll be spending more time staring at the upper screen. There’s no 3D (expected but still disappointing) but the overall look is solid for what it is. Movement could be smoother, but before long I barely noticed. The character designs have been updated from the mobile original. The music is fitting, but don’t expect it to stay with you. Still, the track that plays once you get access to a ship for sailing is quite beautiful. The overall aesthetics are good.

Despite some early pacing issues, Machine Knight really grew on me. The main story has cool themes, and makes for some fun sci-fi enemies. Defeating robots alongside insects and lizards makes for goofy fun. There’s also optional story, found scattered throughout the world in bookshelves and such. Backtracking is a bit much, but the world isn’t overly large, and once a ship becomes available, it’s not really a factor. Machine Knight is a very solid RPG. Genre fans should consider taking a look at it on 3DS. I’d like to see more sci-fi titles from Hit-Point in the future.

Machine Knight is a very solid RPG. Genre fans should consider taking a look at it on 3DS. I’d like to see more sci-fi titles from Hit-Point in the future.