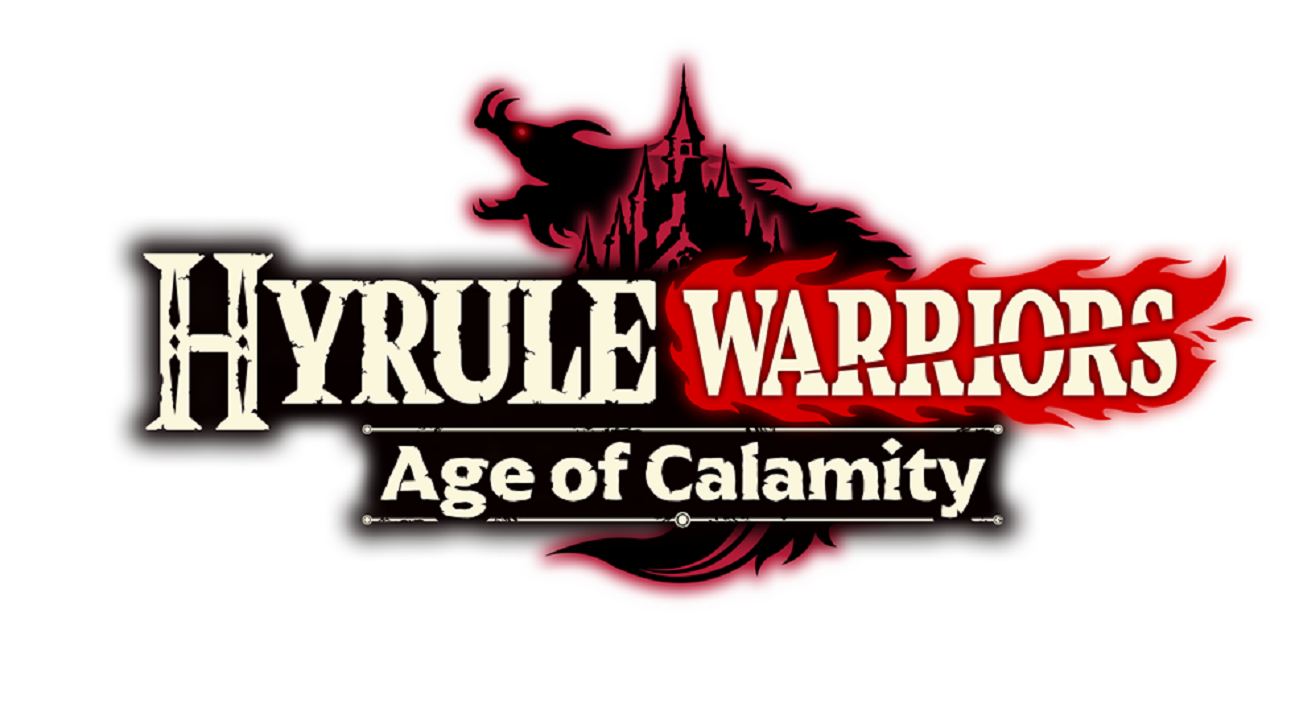 Hyrule Warriors: Age of Calamity caught many by surprise when first revealed, but how does the finished product stack up? Pretty good, so long as you can answer affirmatively to the following question: Have you played (and enjoyed) Breath of the Wild? If so, you’ll likely enjoy this one, despite the Musou gameplay.

Matt said it well in his original Hyrule Warriors review: “…it is still a warriors game far more than a Zelda game, and Zelda fans will need to keep this in mind when picking up a copy.” His words still apply here. Age of Calamity isn’t an adventure where you explore, but a hack and slasher that has your small team going up against tens of thousands of foes. Combos, special attacks, and weak points are the order of the day. You are the spark plug of Hyrule. 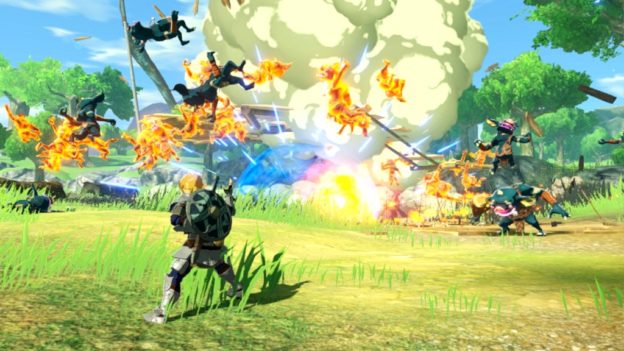 This game style (even with its recurring fan base) might be more niche. Still, anticipation has been building for Age of Calamity between Treehouse Live, Nintendo Power Podcasts, numerous trailers, and even a demo. Heck, Pure Nintendo even has the game as our PNM Issue #55 cover story. Talking to my BOTW theorist friend has especially got me in the mood to play this game. That, and a chance to revisit BOTW for the first time since the game’s launch window.

The tale in Age of Calamity starts 100 years before BOTW, thanks to a time-traveling Guardian. Champions get recruited for the defense of Hyrule kingdom. It’s a story I can get behind, more than its predecessor. I was especially excited to take control of the four Champions, both on foot and piloting the mechanical divine beasts. But more on them in a bit. 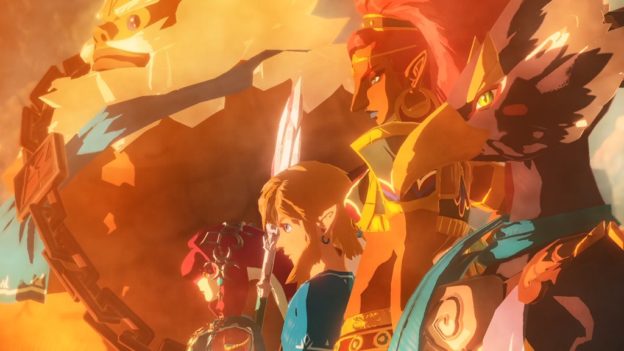 The champions make up a roster that’s only slightly bigger than an NBA team. Like an NBA team, some characters will stay on the bench more. But all are interesting and unique. If you’re used to Musou games with gargantuan rosters in the hundreds, you may find that less is more in Age of Calamity.

Another tweak to the Musou formula is the Shikah Slate Rune abilities. I’m pleasantly surprised how well this ancient tech tablet acclimates into the gameplay. Along with elemental rods, it allows you to bring a BOTW barrage and occasionally forget you’re playing a Koei Tecmo game. These are tie-ins that work well. 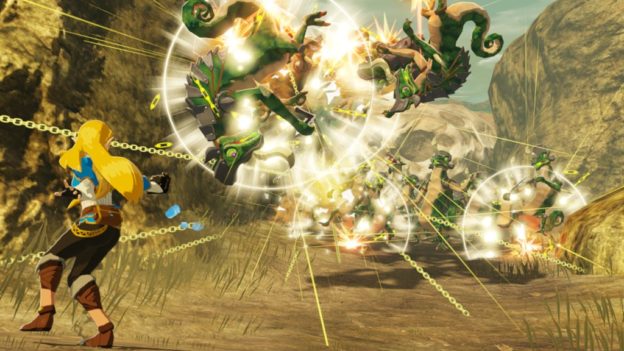 Naturally, the core gameplay is still in the Musou mold and similar to its predecessor with droves of monsters and fairly routine hack and slash gameplay. But no matter how basic it may seem to send enemies flying, you’ll still want to practice. And strategizing for boss encounters will be needed, especially if you aren’t familiar with these types of games. Four (changeable) difficulty options are a wise inclusion.

Monotony can be a factor, even with the effort put towards non-linearity and variety. While the map fills with excessive icons, many are tasks to accomplish with a click or two of a button. Completing side quests, leveling up your characters, and unlocking recipes helps avoid some repetition (while saving you from blisters). I’ve been playing the game in smaller bursts, so it doesn’t wear out its welcome. If you’re a completionist, this game could keep you busy into the new year. 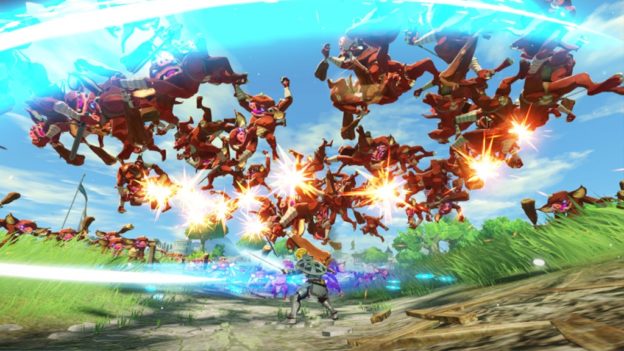 Of course, many are gravitating to this game for the story more so than the gameplay. I’m not going to dare spoil anything. But I will say that if you enjoyed the memory cutscenes in BOTW and plot-related elements in the DLC, this story is for you. You can rewatch all of the story movies via an in-game gallery. Pretty good vocals augment as well, although it’s worth noting that Link’s silence stands out even more. 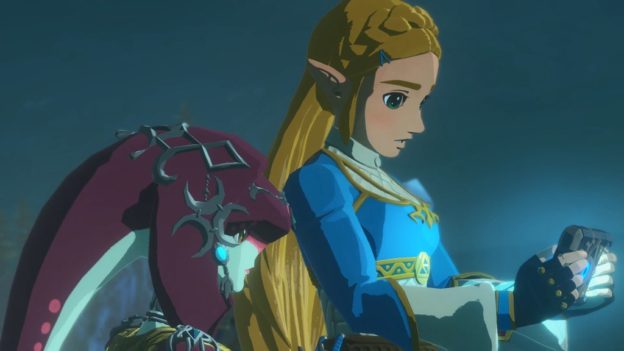 An in-game music player allows you to unlock and listen to some good tunes at your leisure. Yes, I’m the sort that leaves the game running just to listen to them all. The visuals bring back memories of BOTW, my last big Wii U game, and many players’ first Switch game. I especially like seeing weather such as snow in Rito Village and rain in Zora’s domain. True, these can lead to some framerate concerns (especially in co-op). Still, framerate issues were also in BOTW, Link’s Awakening, and Hyrule Warriors Legends, and didn’t stop them from being successful. It ultimately depends on how sensitive you are, but I found myself not caring much in the heat of battle. Camera fiddling is another potential issue, but enemies are rarely far, no matter the view. 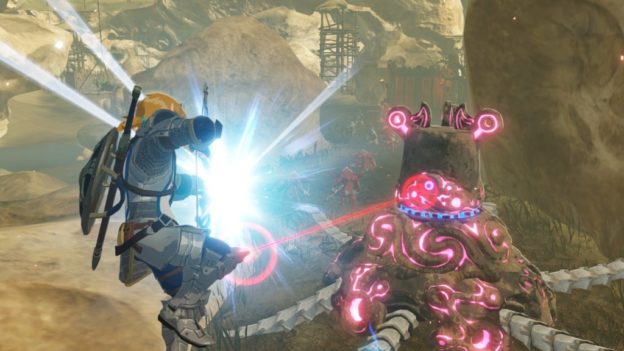 Now it’s time for me to expand a bit on the Divine Beasts, spoiler-free. These gigantic pieces of technology make Age of Calamity truly feel different during the times you control them. The navigation’s slow (as expected), but the bird’s eye view of combat brings a winning perspective to the rack and ruin you lay upon Hyrule’s adversaries. The one thing I’m not overly enthusiastic about is the motion-controlled aiming. While usually a fan, I don’t think in these Beast instances, it’s needed. Wisely, it’s optional.

Some extras you can look for in Age of Calamity are Korok seeds, a sword/shield combo carried over from BOTW save data, various records, and amiibo bonuses. The latter isn’t dependent on Zelda themed amiibo, as any works. That’s awesome, and their use (up to five times a day) gets you some awards. I still want to pick up the Champions amiibo four-pack. 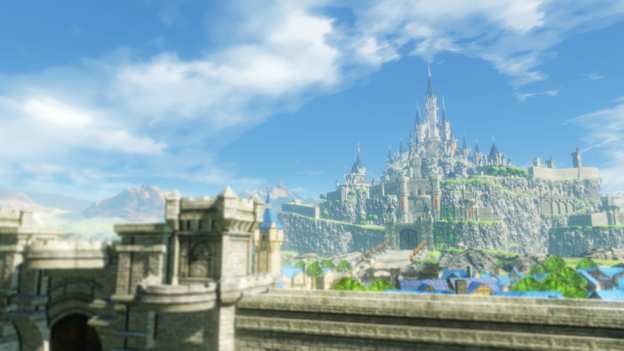 Hyrule Warriors: Age of Calamity is an epic game in some ways. It starts excitingly and rarely lets up. If you stink at dungeons and shrines and won’t miss exploring, you’ll find a world that’s still impressive and characters that have proven to endure in the minds of series fans. In the end, it remains predominantly Koei-Tecomo’s Warrior gameplay with Nintendo’s Zelda dressing, so probably not GOTY material. Still, it’s an entertaining way to tide yourself over until the true sequel arrives.

Hyrule Warriors: Age of Calamity is an epic game in some ways. It starts excitingly and rarely lets up. If you stink at dungeons and shrines and won’t miss exploring, you’ll find a world that’s still impressive and characters that have proven to endure in the minds of series fans. In the end, it remains predominantly Koei-Tecomo’s Warrior gameplay with Nintendo’s Zelda dressing, so probably not GOTY material. Still, it’s an entertaining way to tide yourself over until the true sequel arrives.