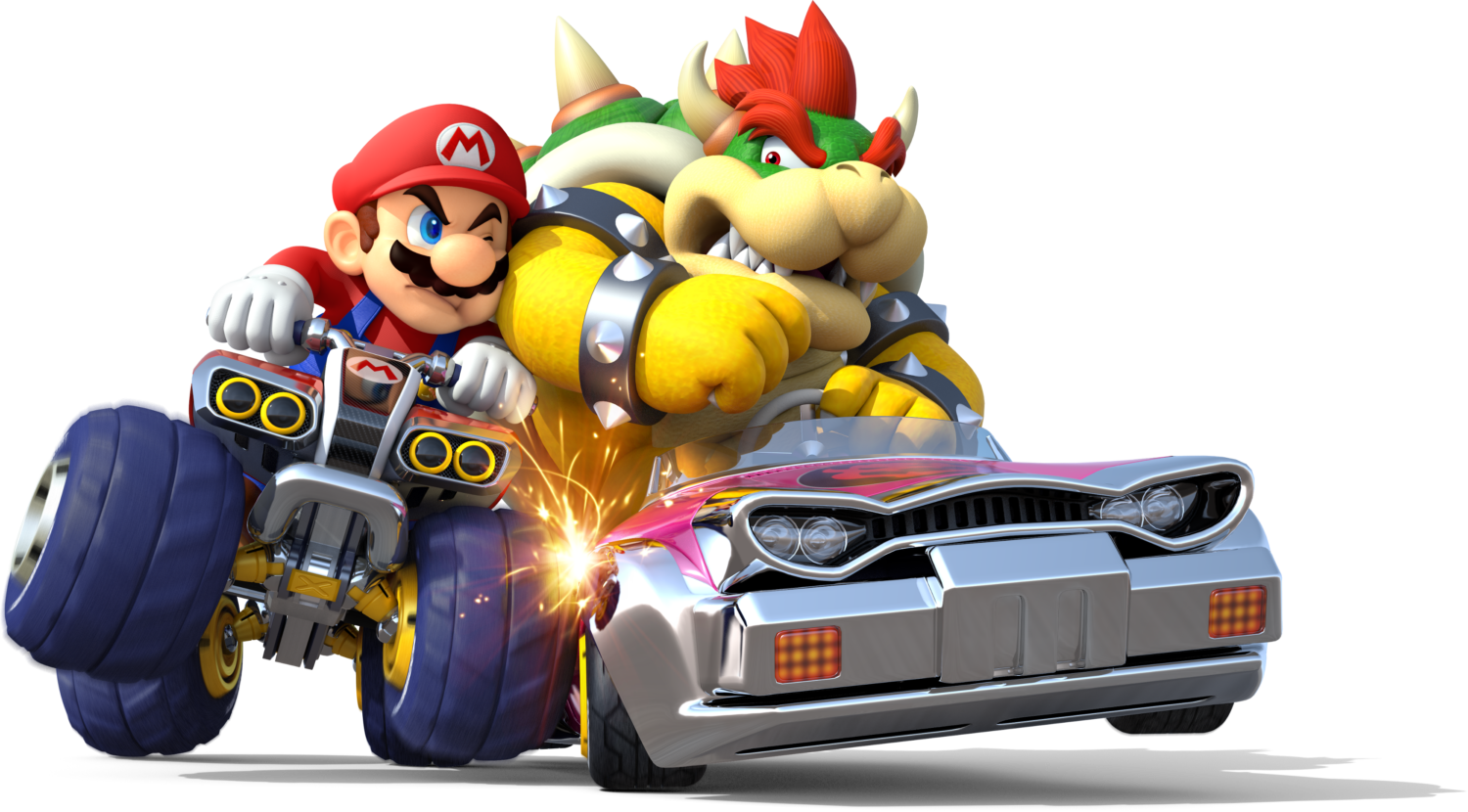 Mario Kart 8 is one of my favorite games on the Wii U, in fact it’s probably one of the best Mario Kart games ever made. With it’s fancy graphics and addictively fun gameplay it was, and continues to be, a hit. So it makes sense that Nintendo would want to bring one of their most successful racing games to the new Nintendo Switch, and it does everything but disappoint. Mario Kart 8 Deluxe on the Switch is what MK8 on the Wii U should have been. This version of the game includes all DLC content from the original game, 42 playable characters, 48 playable tracks, new gameplay modes, new items and a new battle modes to play online or locally with friends. But the real icing on the cake is being able to take MK8D anywhere and play anytime you want. In this review I’m focusing on the newer features that have been added to the Switch version of the game. So if you want a more in depth look at Mario Kart 8 for the Wii U checkout that review here. 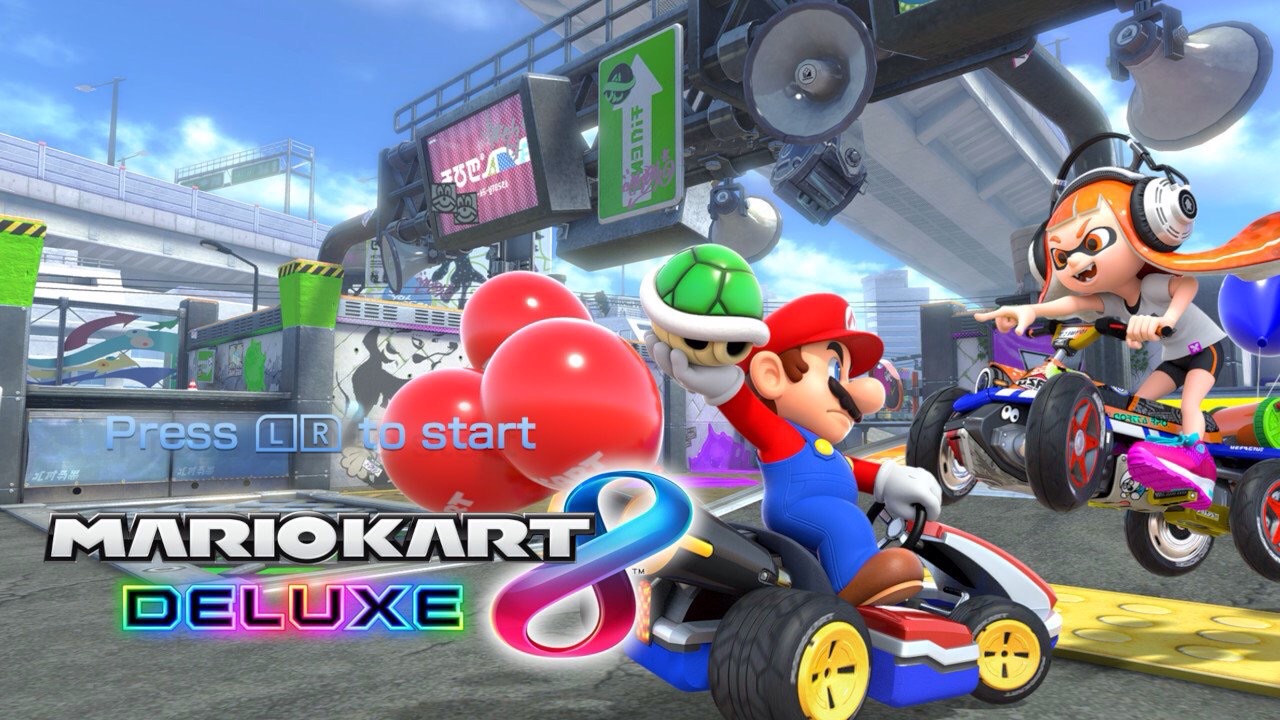 Mario Kart 8 is a beautiful game, so aesthetically speaking there really wasn’t much to update there. It still looks great while playing on the Switch and I really enjoyed how great it looked in portable mode as well. All of the characters and the wide variety of exciting, colorful levels still look just as good on a small screen as they do on the actual TV. You can play with two players using a split Joy-con and up to eight Switch consoles can connect locally (without an internet connection) to join up and play together. Since Mario Kart is one of those games that’s more fun when you’re playing with other people, it’s nice to have so many different options and ways to play. 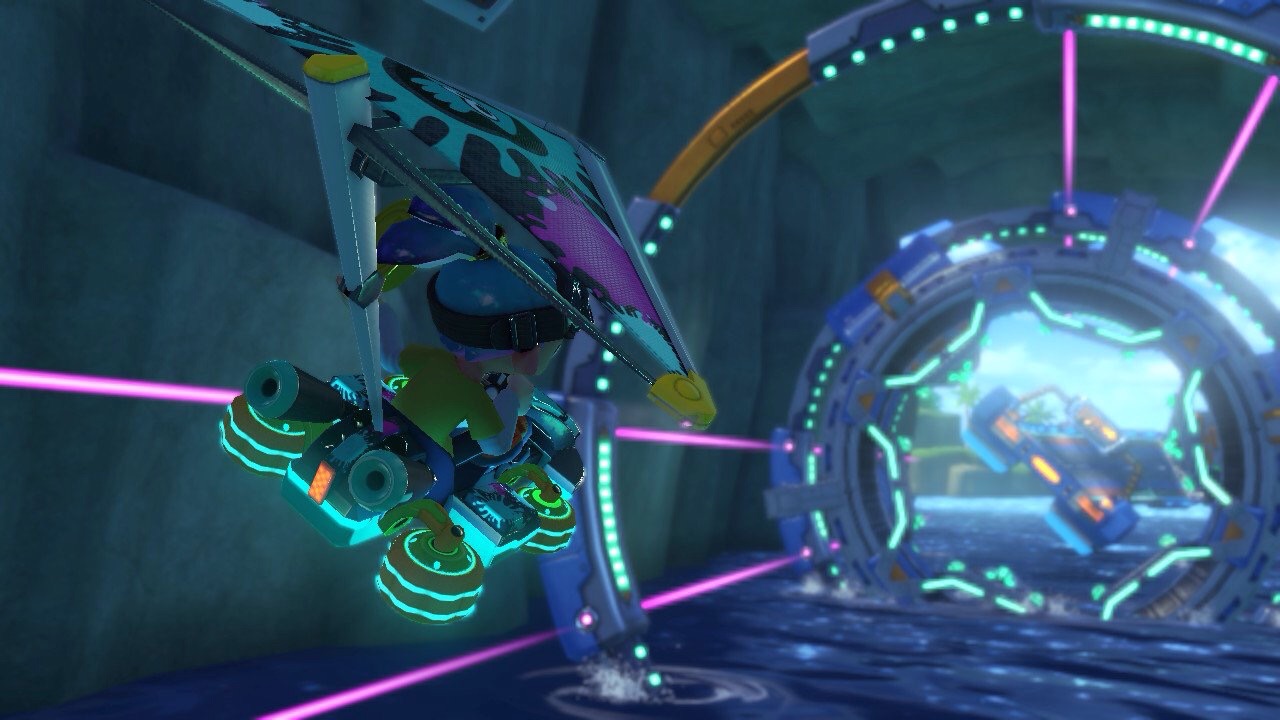 Speaking of options, as I stated before Mario Kart 8 Deluxe has 42 Nintendo-themed racers for you to choose from. All of the racers from the original game return, as well as the DLC characters and a few newcomers, including a boy and a girl Inkling, Bowser Jr, Dry Bones Bowser, King Boo and Gold Mario. The Inklings have three color variations and there’s also some cool new karts and  equipment to go with the new characters, including the Splat Buggy, Ink Striker, Koopa Clown and a Super Glider. Nintendo has also added a Splatoon battle mode level AND if you use your Splatoon amiibo you can get a cool new costume for your Mii racer. So lots of love for the Inklings this time around. Completing the grand prix cups will unlock vehicles, wheels and gliders that you can combine to create the best stats possible, giving you the advantage when it comes to your speed and acceleration. 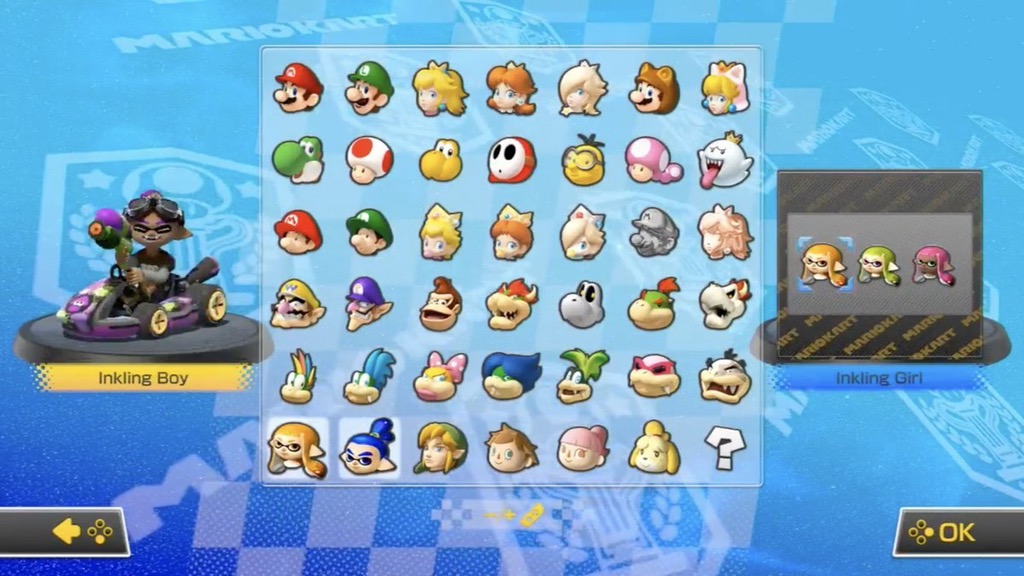 Players that enjoy high speed races will love trying to conquer 200cc mode. It was absolutely insane trying to guide my kart through some of those twists and turns at such a high speed. So for those of you that never use the brake, you better start practicing, especially if you want to unlock the Gold Mario character. The only way to get him is to win every cup in 200cc. So good luck with that. Fans of the Mario Kart series will also be excited to know that the ability to hold two items at a time is back. We haven’t been graced with this feature since Mario Kart Double Dash, for some reason? So even though it’s long overdue it’s nice to be able to grab two items at a time again. One small thing that I didn’t like about double items is that you can’t switch between the items like you could in Double Dash. Now in MK8D you must use the first item you have before you can use the second one, instead of being able to press a button and swap them out. So that was just a little frustrating at times. 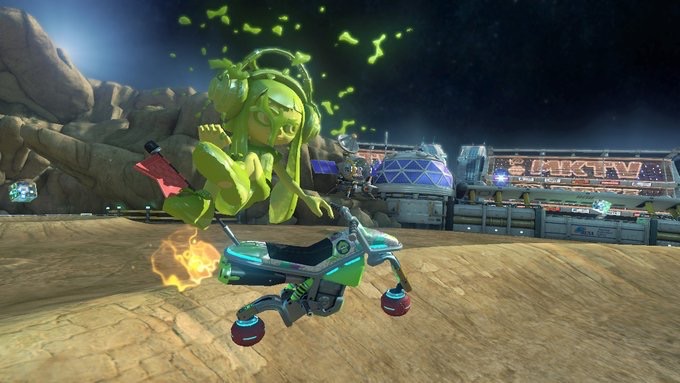 The Deluxe version of Mario Kart 8 is also equipped with four new, exciting battle modes and eight battle arenas to play in. Since the Wii U game was really lacking in the battle mode department its refreshing to see this many options available this time around.

Balloon Battle is back, but in this version instead of being eliminated when you lose all five of your balloons you will respawn with three balloons and your score will be cut in half. Which is a lot more fun than sitting there watching everyone else play. Even if you’re losing. Bob- omb Blast is very similar to Balloon Battle except the only item anyone can use is bombs. So you can imagine the chaos that would ensue in such a small area with everyone tossing live explosives around. Coin Runners is one of my favorite new battle modes. Players race around the level trying to collect as many coins as possible. Getting hit by another racer or running into an item will cause you to lose coins, the player that has the most coins when the timer runs out wins. It’s a really simple, but fun concept. Next up is Renegade Roundup, in this mode players will form two teams of cops and renegades. The cops have piranha plants attached to the front of their karts and they must go around and try to capture the players on the renegade team. If you’re caught you’re placed in a “cell” until another player on your team frees you. When the timer runs out the team with the most points wins. I played this a lot and it can be really exciting at times, especially online. Last but not least is Shine Thief. In this mode one player tries to collect the shine sprite and hold onto it for as long as possible. If you can protect the shine from being stolen then you win. But this is no easy task. Protecting the shine from everyone else can be quite difficult, especially when everyone is pelting items at you from left and right.

Aside from characters and gameplay modes there are a lot of other changes to the Switch version of Mario Kart 8 that make the gameplay a lot more enjoyable.

Smart Steering: This new feature will help players with their driving skills. If Smart Steering is turned on it will help you stay on track and automatically steer the kart away from cliffs and edges. It can be turned on and off while the game is paused. It’s a great option for beginners or kids that have trouble with the more difficult tracks.

Super Drift Boost: While drifting you will notice that that sparks around your kart will change from blue to orange to purple. This new purple color gives you a way bigger boost than the orange sparks. However you cannot use this feature if you have Smart Steering turned on.

New Items: You might recognize the two new items available in MK8D from previous MK games in the series. The feather items allows you to jump, which you can use to get more air on a ramp or hop over another player or other types of road hazards. The Boo item will let you steal an item from another player, chosen at random.

Online: You now have the option when playing online to change your character and kart while in the lobby, instead of having to leave the room and start all over. Which is nice if you’ve been playing with a certain group of people for a while.

There are also a few tweaks to improve gameplay but I think I pretty much covered all of the important stuff. Needless to say Mario Kart 8 Deluxe is packed full of upgrades and new things to pique the interest of new players and even fans that owned the original version. Even if you don’t care about the new features, the ability to play this game in portable mode is almost reason enough to buy it again. I’m also predicting that more content will be released for Mario Kart 8 Deluxe, since I cant see them releasing another Mario Kart game for the Switch any time soon. So if you’re one of the many people that’s been waiting for another big, first-party game to play on your Switch, then Mario Kart 8 Deluxe is one to get. People of all ages can enjoy the fun and chaos that is Mario Kart 8. And remember, even if you only have one set of Joy-cons you can still enjoy playing this with another person at home, or on the go. Mario Kart 8 Deluxe is available in stores and on the Nintendo eShop for $59.99. 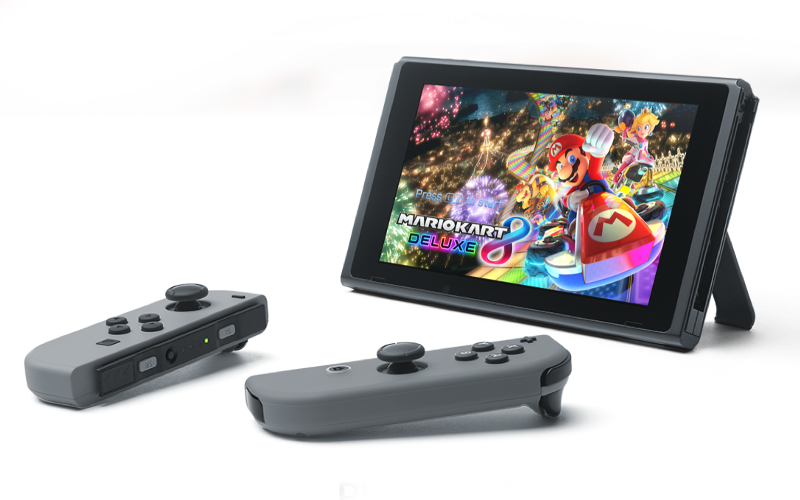 Mario Kart 8 is a great addition to the Nintendo Switch library. While it may be a port of an older game it’s been updated and improved immensely. There are more ways to play than ever before, and being able to play Mario Kart anywhere in portable mode is a major plus!