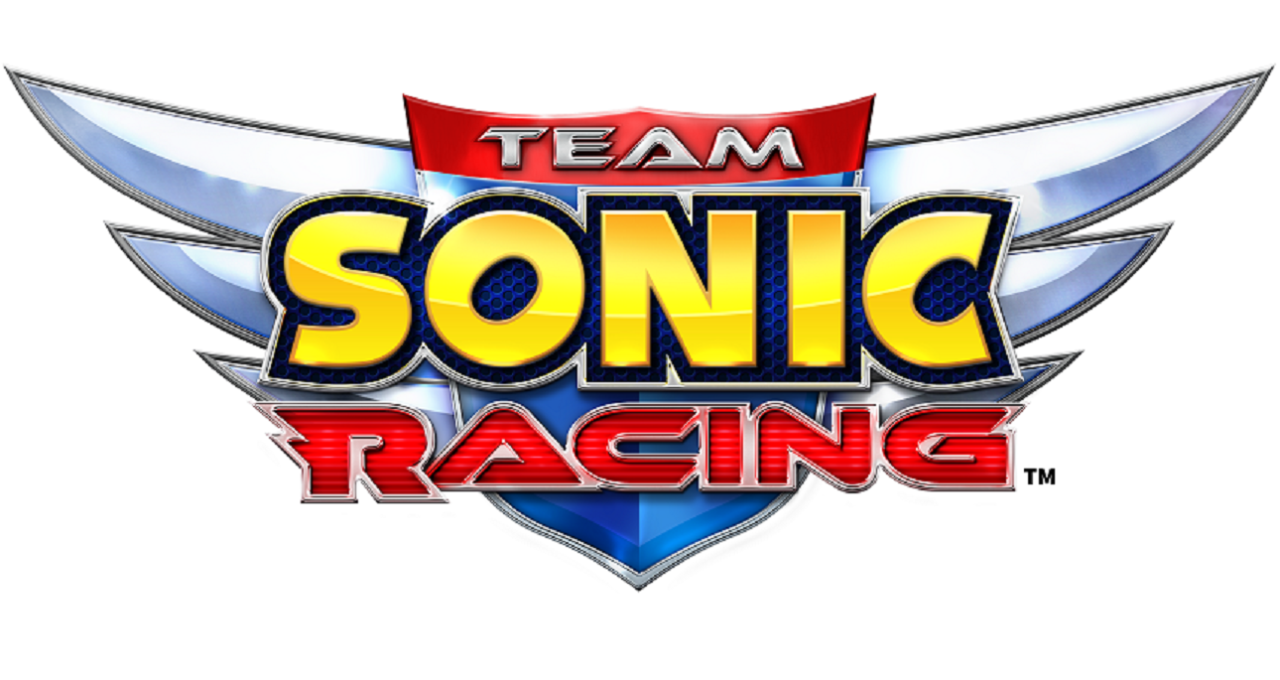 Team Sonic Racing left me with mixed feelings at the beginning, but the longer I kept playing it, the more it grew on me. Despite missing transformable vehicles, and the expanded lineup of SEGA favorites from its predecessor, the new team element is a very worthwhile addition.

When cooperating as a trio you can slipstream behind teammates, and get a speed boost to slingshot past them. Depending on where you are on a track this might actually do more harm than good, but it’s a nice risk/reward setup. You can also share powerups amongst each other. If you’re in the lead, offer a wisp (item box) to a teammate behind you. If it’s you bringing up the rear, call for assistance from someone in front. A quick button press is all it takes, and thankfully it’s very easy to do on the fly without losing concentration. Work well together for long enough, and you’ll get a team ultimate boost, which not only increases your speed but makes you invincible for a short while. It’s sure to brighten up your day. 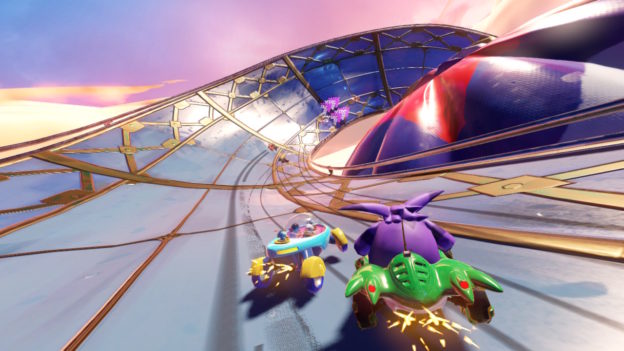 I’ve noticed, when playing with AI-controlled partners, I’m often the one carrying the team. We’re either clustered together in the standings, or I’m on top with my teammates farther below. This does lessen the competitive nature to some extent, at least on normal difficulty, but Team Sonic Racing will endure when playing with friends. 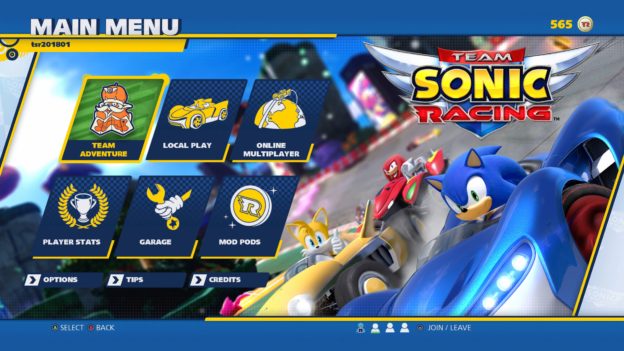 With local multiplayer, you have the choice to either compete against friends, or have them join your team for some cooperative racing. Both are fun, so this is a great option. What’s also great is the ability to set up friend matches online with ease. One creates a custom lobby with the other(s) joining said lobby. I tested out this feature with Justin, and we both agree it performs well, without lag or other issues. It’s understandable that the games online multiplayer is being advertised as a key selling point, though it’s not a complete success. I’ll talk more about this in a little bit. 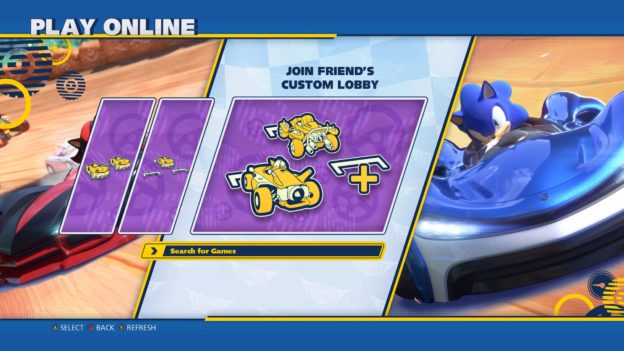 You’ll gradually unlock 15 racers, all from the Sonic universe. The missing characters from other SEGA franchises are bound to divide players. As I alluded to at the start, I wish they were here (along with their associated tracks) but Sonic fans are sure to enjoy the focus on the Blue Blur and his cohorts. They’ll exchange character-specific, light trash talk during each race. Granted, these exchanges probably don’t add as much as the developers hoped, but they do bring some color to the proceedings. Should they prove annoying, you have the option to mute them and just enjoy the musical tracks. 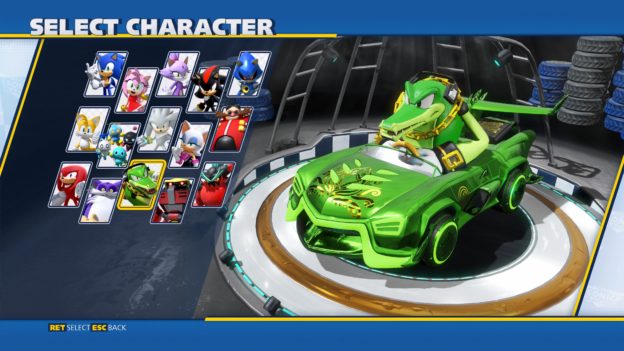 The 21 lively tracks include a dozen new designs, with the remaining being ones from prior entries. I recognized some tracks like Ocean View and Roulette Road, but I think it’s a good, colorful mixture overall, even if some remind me a bit too much of Mario Kart 8. Speaking of Mario Kart, the wisps are familiar variants to items found in the Nintendo series. Some are virtually identical but, in the end, I don’t really mind all that much. They’re proven to work well, and the familiarity helped me jump right in. 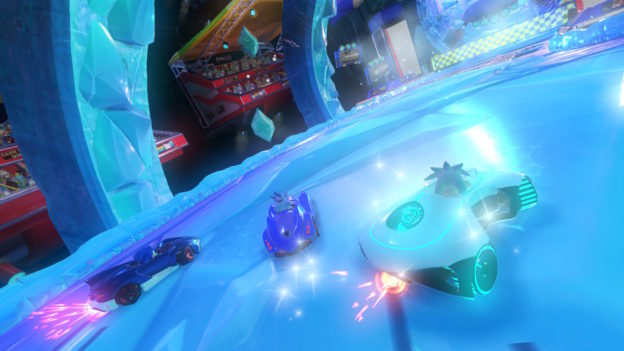 As you race, you’ll unlock ways to customize your carts. Each character has several parts unique to their vehicle. You can also alter the vehicle’s appearance. Some might not enjoy the random nature of this process – you use in-game currency to unlock capsule machine esque Mod Pods – but between playing with friends, doing time trials, and advancing through the Team Adventure mode, you’ll earn plenty in no time to acquire those coveted parts. As a bonus, a sweet remix of “Can You Feel the Sunshine” (from Sonic R) plays during Mod Pod purchasing! 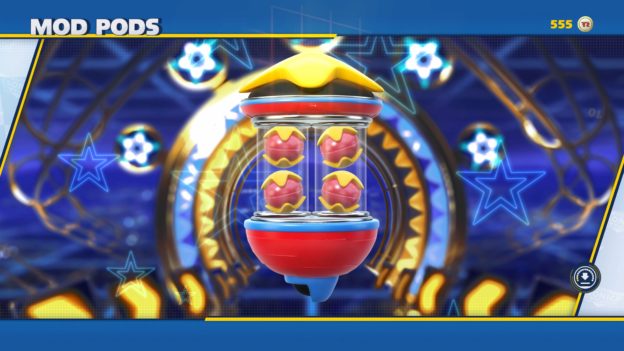 I want to briefly account for the Team Adventure mode, as this offers something of note for solo players beyond simply earning trophies in team or standard Grand Prix. Here, you advance through a series of maps and earn stars to unlock your next challenge. While I absolutely like this idea, it becomes far less fun when it deviates from the game design. Let me expound… 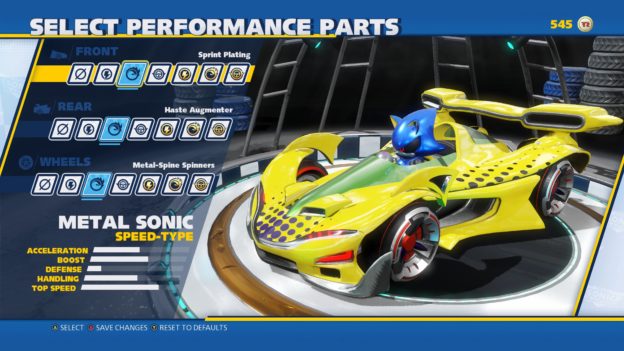 For a team mode, there’s an illogical number of challenges where teams are absent entirely! Daredevil has you driving solo, trying to closely pass scattered posts against a strict time limit. Destruction has you trying to destroy targets by your lonesome, also against a strict time limit. Eggspawn Assault isn’t too bad, but taking out generic rivals just made me wish for a real battle mode. The Ring Challenge is the worst, a lonely snooze fest if ever there was one. Rings, in general, are easily skipped in this game, as one hit makes you lose them all. 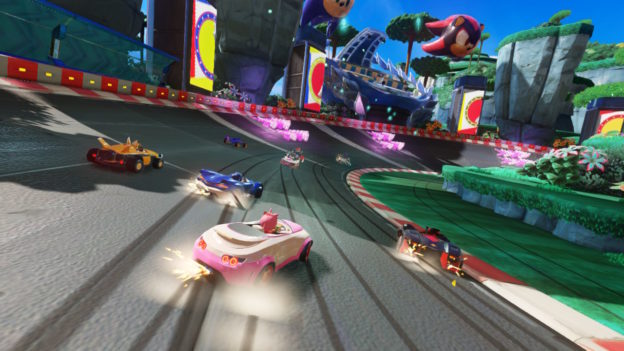 I passed over every non-team mode for as long as I could, as most of them I didn’t find to be enjoyable. Eventually, I did have to play some in order to advance. Around chapter six, the game locks you out unless you earn silver and platinum trophies on Daredevil Challenges. To whoever made that decision, might I respectfully suggest they remember both the name of the game (Team Sonic Racing) and the mode (Team Adventure). 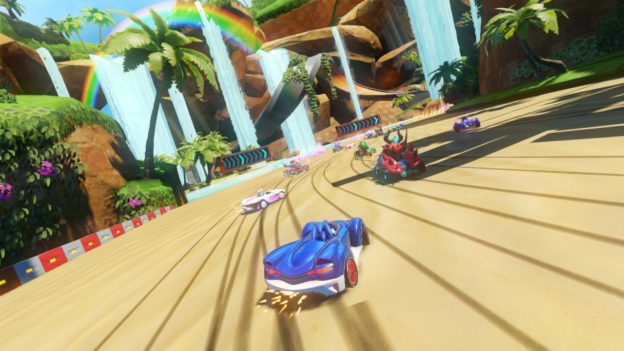 As mentioned earlier, online is also an option, although the first time I tried this I got a “Network Error” message. Once I got in I did have some fun, but it has its limits. The team nature makes me really wish there was a way to communicate – strangers aren’t as in synch as friends. Also, there’s a lot of waiting around. When it’s quick, it can be too quick, dumping you into a match seconds from starting so that you don’t even have time to pick your character. Making a lobby with friends is my preference. 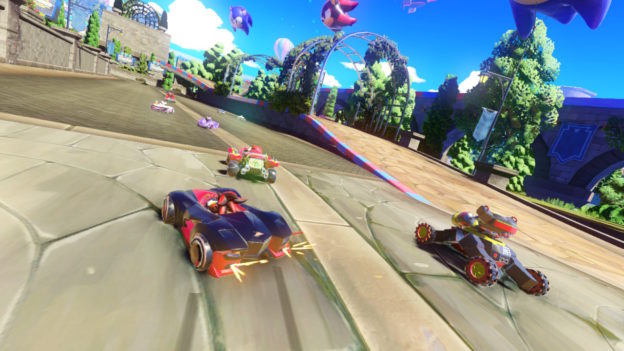 While I still have some concerns with Team Sonic Racing, I can’t deny that I’ve come around to it. I’ve sunk over 15 hours, across several extended play sessions, and had quite a bit of fun doing so. The $39.99 launch price is more than fair for what’s included here. If you’re looking for an enjoyable alternative after playing Mario Kart 8 for the past five years, Team Sonic Racing smoothly drifts its way to a decisive silver trophy. Start your engines!

While I still have some concerns with Team Sonic Racing, I can’t deny that I’ve come around to it. I’ve sunk over 15 hours, across several extended play sessions, and had quite a bit of fun doing so. The $39.99 launch price is more than fair for what’s included here. If you’re looking for an enjoyable alternative after playing Mario Kart 8 for the past five years, Team Sonic Racing smoothly drifts its way to a decisive silver trophy. Start your engines!