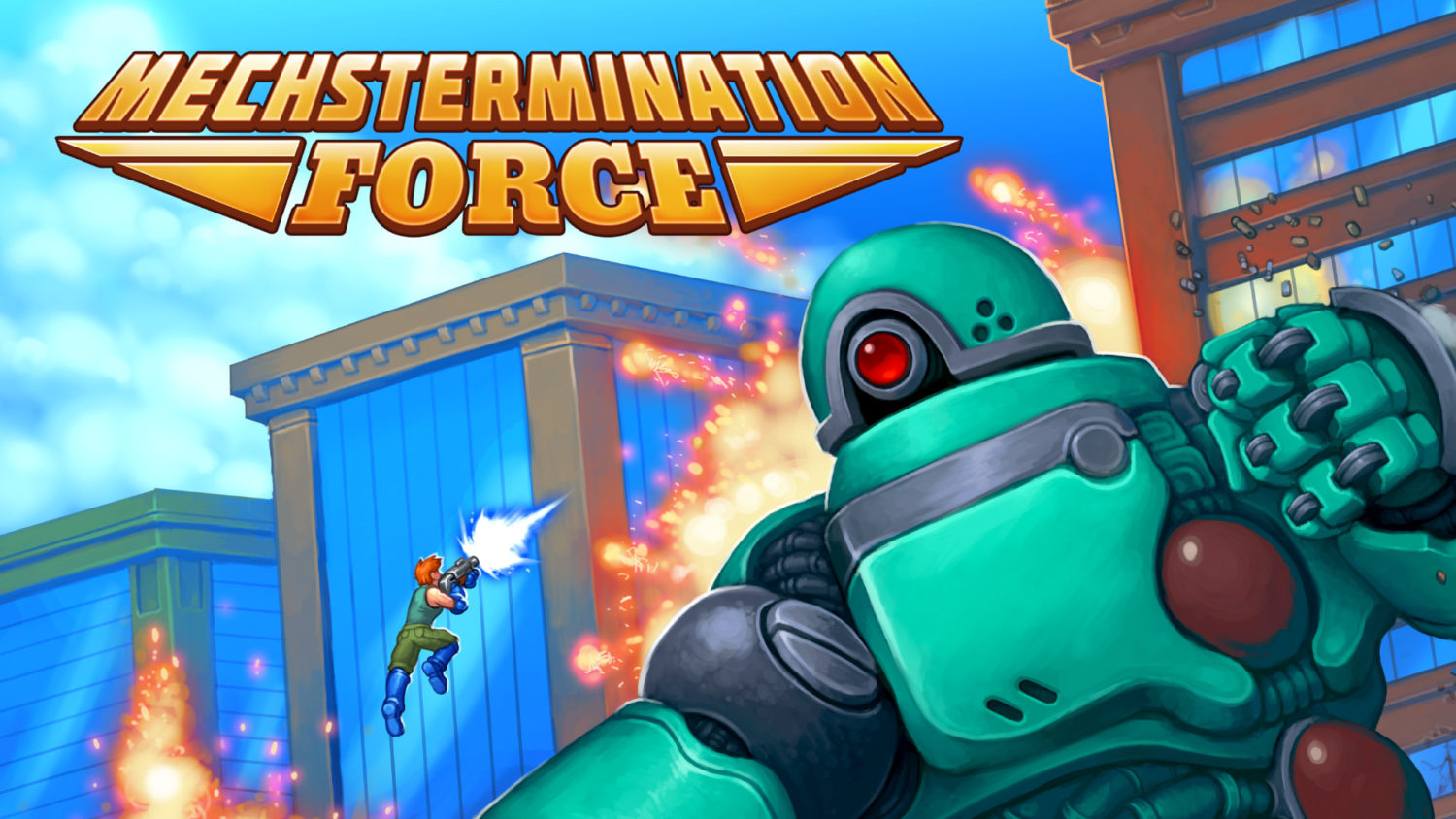 Full disclosure: I have not finished Mechstermination Force. I will, but it’s going to take some time. I mention this now because this game of massive robot combat contains only 14 robots. 14 boss battles, back-to-back. Doesn’t seem like much, right?

It is. Consider the massive scale of these robots. Have you ever watched a Godzilla movie in which people are shooting guns at him and thought, “You’re wasting your time?” That’s kind of what’s going on here, except these robots have unique weak points for you to exploit. The trouble is you first have to find them. And then you have to reach them. And then you have to break them. And you’ll have to do this multiple times. It’s pretty much perfect fun. 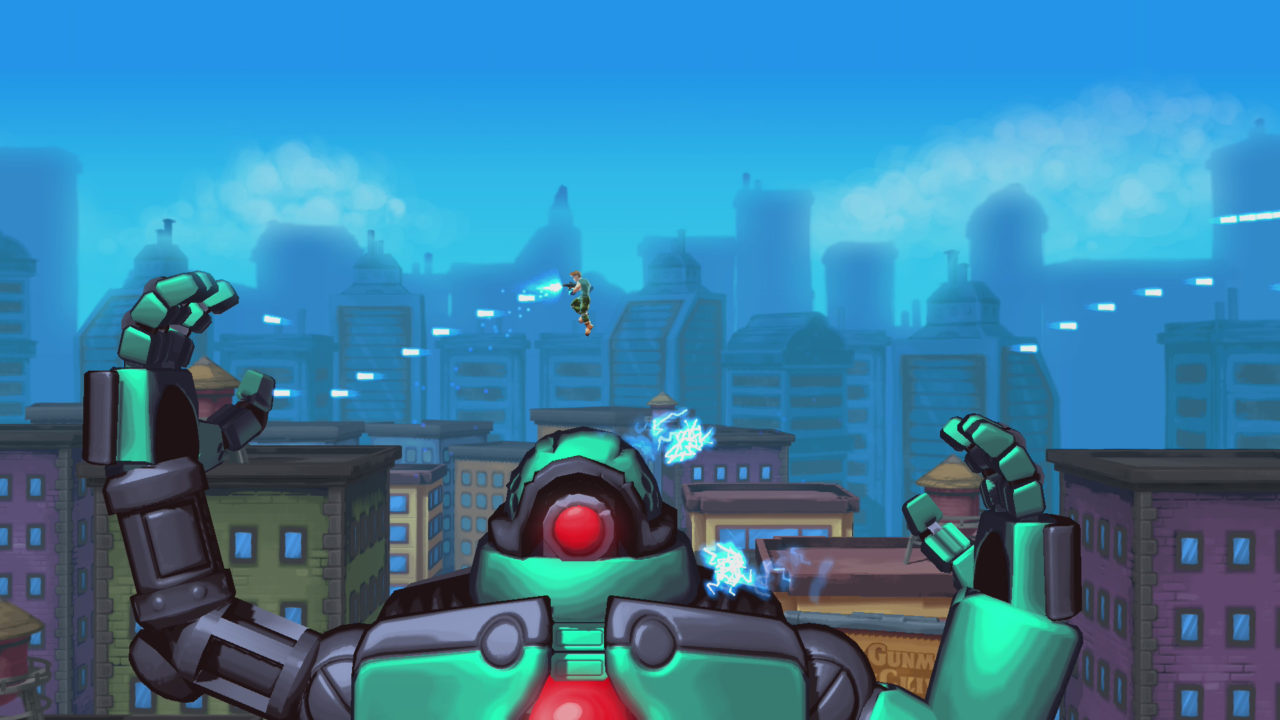 Mechstermination Force comes to us from Hörberg Productions, the developer of Gunman Clive, whom we interviewed for the February/March 2019 issue of Pure Nintendo Magazine. You’re a member of the titular resistance. In fact, about 15 seconds into the introduction you become the only member of the titular resistance as your comrades prove their uselessness within a couple of blocks. That leaves just you (and one other player if you have a friend nearby) against a wave of giant robots with little more than a gun and the ability to jump very high…at least at the start.

Thankfully, robots have to be programmed to act out their commands, and that means they’re repetitive. The combat in Mechstermination Force really amounts to platforming action on a loop, and you’ll need to learn how to avoid/eliminate the robot attacks so you can get to their main weak points and shut them down. 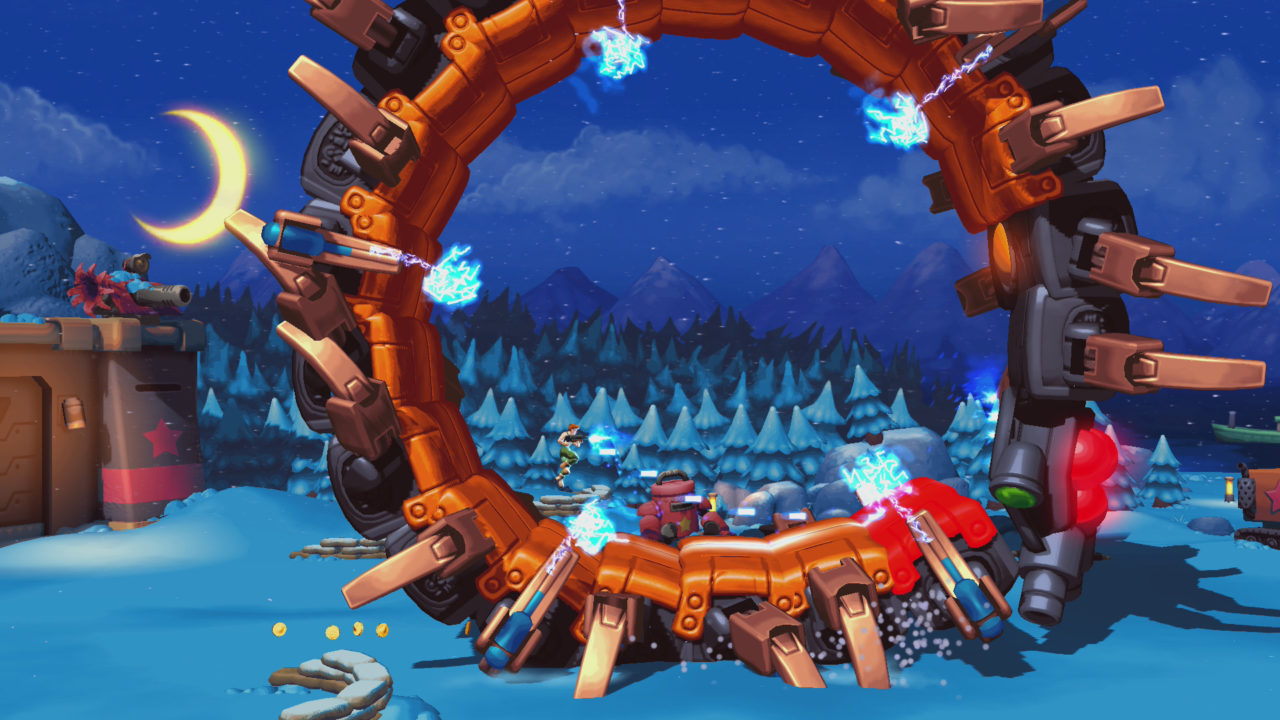 The robots have more than one weapon, and by eliminating that weapon you can remove its attack from the robot’s arsenal. An early encounter on a bridge, for example, has a robot shooting a nearly unavoidable laser beam from a horn on its head. The horn was fairly easy to destroy from down on the bridge, however, so I only had to take a few hits from that before it was no longer a bother.

That doesn’t mean, however, that you’ll be able to just memorize attack patterns and move on. Oftentime you can see what you have to do to win (or at least make it easier to survive) but won’t be able to do it with your current abilities and weaponry. You’ll need to upgrade, and doing so requires the accumulation of money dropped by the various robots (best not to question it). That means level-grinding, or at least losing a lot until you’re equipped to win. You can choose to grind by practicing against robots you haven’t yet beaten (although they’re mostly not available until you’ve eliminated the robots before them) or by going back against the robots you’d already wiped out. Both approaches are useful—taking on new robots helps you learn their attacks and weaknesses, while taking on defeated robots boosts your confidence. It’s also good for trying out and mastering new weapons, and it’s surprising how easy it would’ve been to take them out the first time if you’d had that weapon available. The Mechstermination Force really shouldn’t require their soldiers to purchase their own equipment…especially since there are only one or two left. 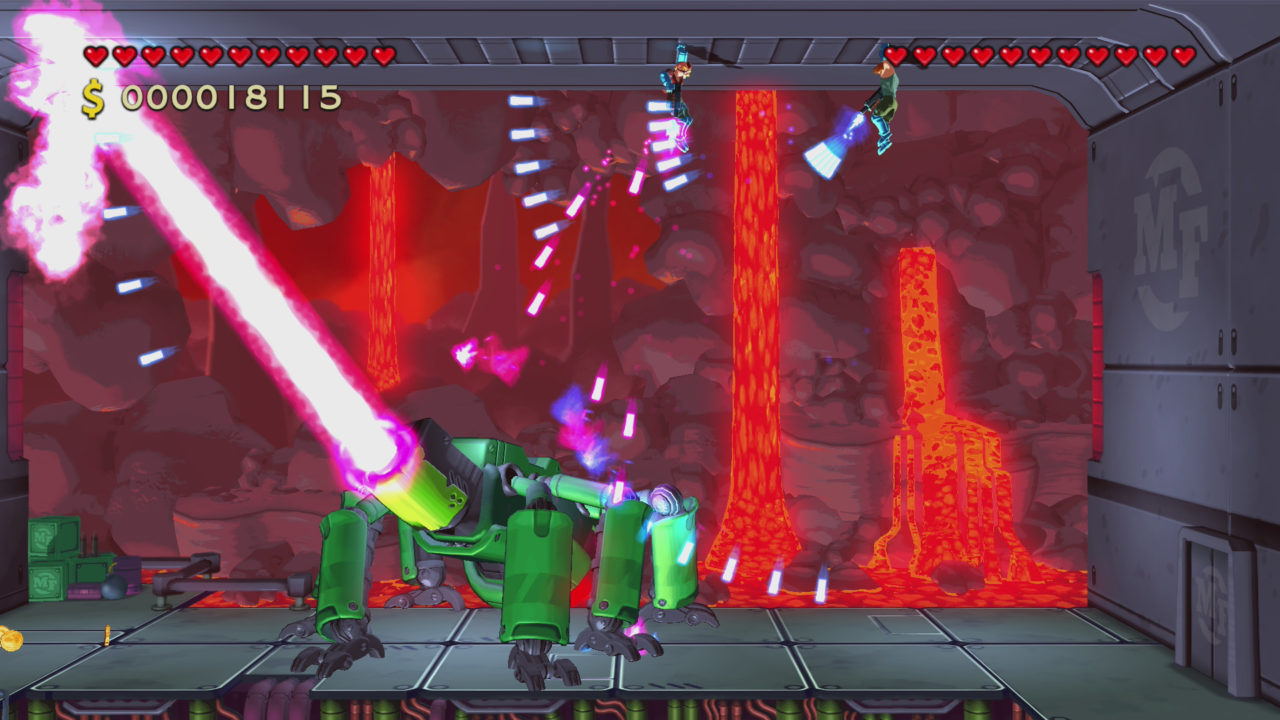 Mechstermination Force benefits from a control system that makes it easy to get around and utilize your various weapons and abilities. It’s also incredibly satisfying when you finally work your way to a robot’s vulnerable spot to give it a good whack with your baseball bat, wrench, guitar, etc. Jumping sometimes felt a little sluggish, but everything else was nice and crisp.

The game also benefits from some magnificent design. The music and graphics are colorful and cartoonish, keeping the proceedings light while driving the action. The robots themselves are outstanding and surprisingly diverse, and just when you think you’ve beaten one it may launch an entirely new form of attack. Learning how to fight them was a pure joy—frustrating, sure, but in a manner that keeps you coming back. It’s not unlike taking on those game bosses that trounce you forever, and maybe you get close a couple times, but when you finally get into the flow you’ll beat it with 75% of your hearts intact. 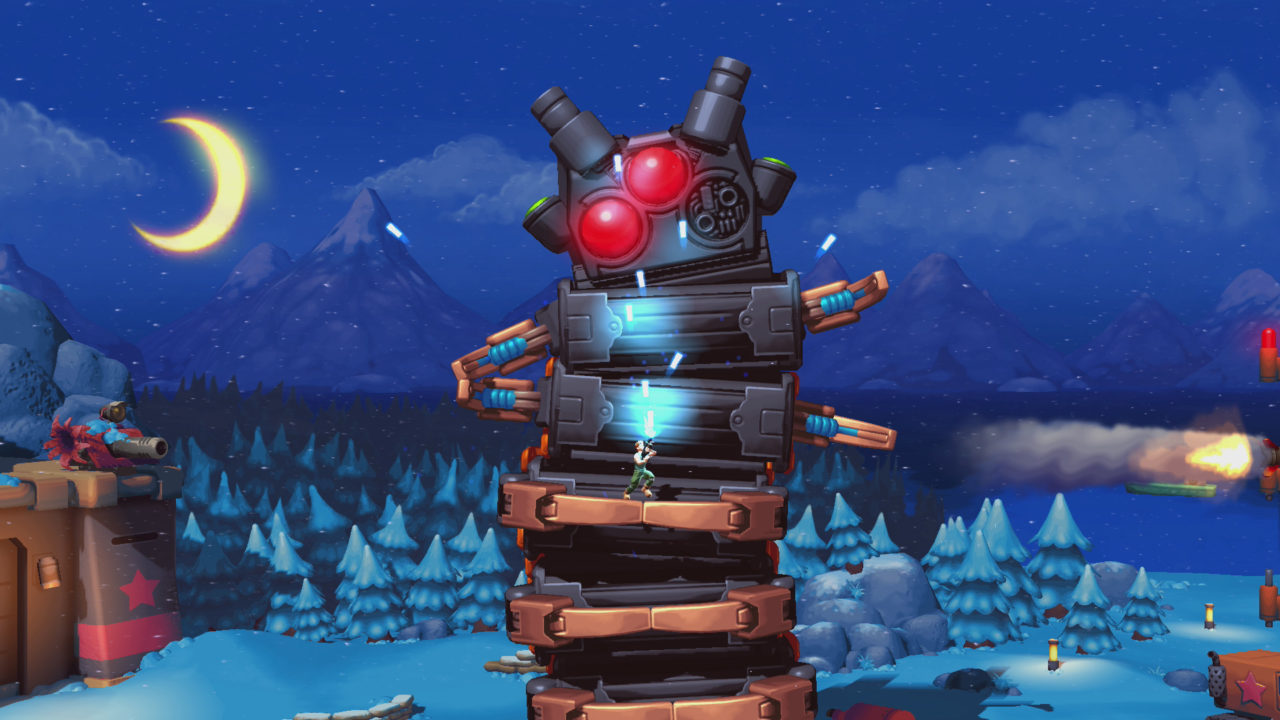 My complaints about the game are minor. The Mechstermination Force base is unnecessarily complicated to get through; I’d wiped out my third robot before I even realized you can climb your way to an area that allows you to fight earlier robots. Also, two of the four playable characters are so similar in design that it’s hard to keep track of who’s who in multiplayer mode, especially when the screen pulls back to provide a wider view of the action. And speaking of multiplayer, it’s local co-op only. That’s certainly the best way to go, but being able to play with friends online would’ve been cool.

Mechstermination Force is one of those rare games that accomplishes nearly every objective. It harks back to classic arcade fun without feeling retro or redundant (comparisons to Contra are fair, but not entirely accurate). It also provides a hefty challenge that leaves you laughing in frustration when you lose and jumping for joy when you finally take a robot down. There are only 14 robots to eliminate, but it’ll take a while to get through them. It’s also priced accordingly at only $12.00.

Get Mechstermation Force, get a partner if you can, and get ready to save the world. You’re going to frequently die trying, but the process will be a blast.