A robot, a poncho and a journey of discovery!

The Wii U eShop is flush when it comes to retro inspired platformers. Part of what makes Poncho from Delve Interactive stand out is its mechanic of moving between different layers in the game. It’s not unlike Mutant Mudds Deluxe or Xeodrifter, yet goes even further by giving more freedom. This freedom comes at some cost though, which I’ll expound on shortly. 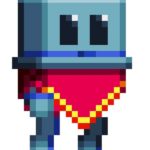 The game is pretty light with its story. You control a robot clad in, you guessed it, a Poncho. There’s plenty of other robots you’ll run into who will chime in with a sentence of text, but it’s a cryptic adventure for the most part. This isn’t necessarily bad, but I found it slow to establish momentum. It’s more than just the small (but frequent) load times that add up, or the unfortunate stutter that persists. 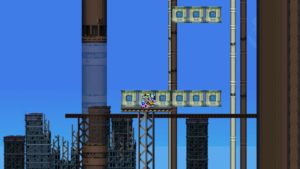 Some of the level designs can be frustrating.

Poncho is advertised as “an open world”. I’m not sure this fits, at least in the traditional sense most think of, but the game’s freedom does make its world less linear. This sounds great on paper, but in execution it proves just okay. The mechanics and level design have the potential to frustrate. 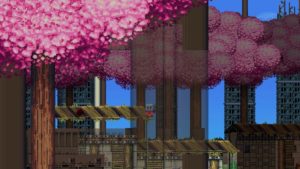 One of a few spawning issues.

Determining what layer a platform is on can prove a real challenge in 2D. Moving platforms also present some difficulty, often having no real discernible movement patterns. In trying to find rhyme or reason behind them, I encountered issues. One example was the game spawning me in an area where I could not move. Having to restart a level simply to gain control of Poncho proved quite annoying! 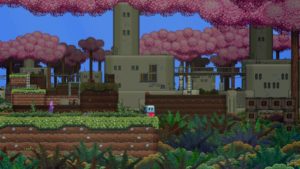 Despite the stutter, this game is a looker.

Graphically, Poncho has retro visuals done right by and large. Although lacking some detail found in the PC version, the game presents a world that’s pleasing to the old school eye. It mainly suffers from the aforementioned stutter, and when the visuals are obscured. Whether it be from other layers, or poor lighting choices, it’s simply hard to fully appreciate graphics that can’t be seen. 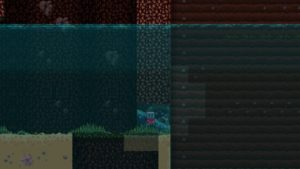 Relaxing music with the occasional bug.

The soundtrack for Poncho is one of the game’s stronger elements. Best described as relaxing, it helped to lessen some of my frustrations. The final level has no music however, and its sound effects are sporadic at best. Watching video of the PC version, it’s evident that this is a bug that wasn’t caught in porting to the Wii U. 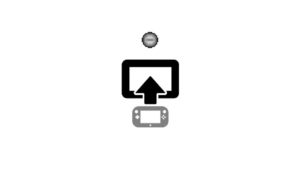 The GamePad is the only controller, which disappoints. Although the game controls fine with Poncho’s limited moveset (save the stutter) choices are always welcomed. In a misstep, the game doesn’t mirror its dispay to the TV or GamePad!

I want to add (without spoiling anything) that Poncho’s final level almost feels like part of a different game. Players will discover this for themselves, but it ended things on a real down note for me. The audio glitches did no favors.

I think that Poncho is a pretty good game that mostly suffers from subpar porting. I actually enjoyed it more often than not, but I’d suggest considering the Steam version, or waiting for a sale. I’d really enjoy seeing Poncho receive some polish with a patch, or ported to the 3DS.

I think that Poncho is a pretty good game that mostly suffers from subpar porting.