If you’re a Nintendo 3DS player in late 2019 you’re hungry for good games, So Quarters, Please! comes recommended, especially for those who appreciate the “golden age of arcade video games”.

This compilation comes from Nostatic Software, who earlier released Quiet, Please! on the 3DS eShop. That collection had a few arcade games included within it, but the arcade has been expanded in this standalone release.

The five games included in this package aren’t originals, but replicas of “oldies but goodies”. Fear not, as these are higher quality than you might expect. The titles include Meteors (Asteroids), Nebula (Galaga), Dino Dig (Dig Dug), Face Invaders (Space Invaders), and Bound ‘n Bash (Bump ‘n’ Jump). With the exception of Face Invaders, I find all of them pretty fun, although one letdown is that Badger (Frogger), a prior Nostatic arcade game, is curiously missing-in-action here—it was my favorite.

Each game has a top five local leaderboard where you can enter your initials. And yes, these save so you’ll have something to aim for on replays. The game even remembers the last entered letters, so you don’t have to cycle through them each time. That’s a small touch, but very much appreciated, as many would have overlooked it for a budget release on old hardware.

Another appreciated touch is the way the games are laid out. Rather than a bare-bones menu, they are packed within a small, but lively, neighborhood arcade. After selecting a character from more than a dozen pixel characters, you can explore the arcade’s two floors—adjust the lighting, change the song on the jukebox, even tweak the time of day to see background changes. It won’t take long at all to see everything that’s offered, but all of the animated extras show Nostatic cares about the quality they bring to their collections. 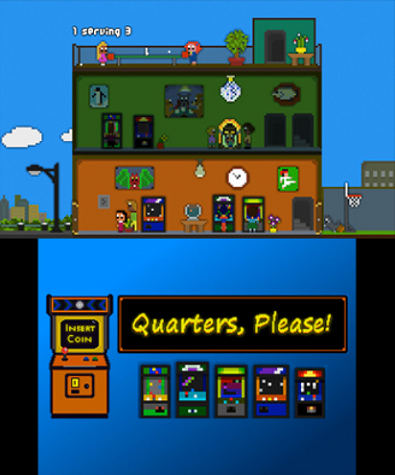 While I think Quiet Please! is certainly the better value at just $2.99, Quarters, Please is also priced fairly. The $4.99 launch cost breaks down to just 99-cents a game, which is great when you consider that games like Dig Dug and Galaga sell on the eShop for $4.99 each.

Quarters, Please! has charm, is entertainingly retro, and replayable. Yes, it has cut a few games, but it’s added even more in their place. It’s basic but fun, and the latter has become a real rarity on the Nintendo 3DS in 2019. While I hope to see a return to the Quiet series at some point, this is a solid spinoff.

Quarters, Please! has charm, is entertainingly retro, and replayable. Yes, it has cut a few games, but it’s added even more in their place. It’s basic but fun, and the latter has become a real rarity on the Nintendo 3DS in 2019.