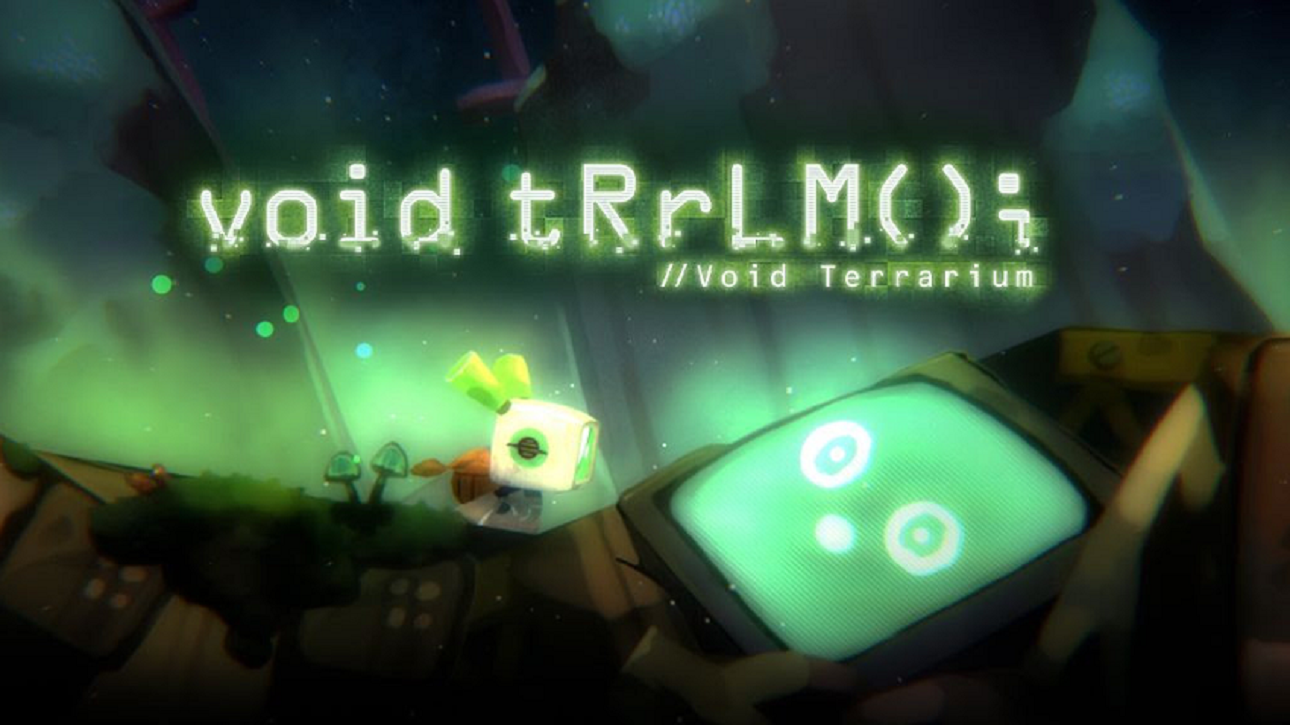 Void Terrarium has lots that I appreciate, so it’s a shame that I don’t enjoy it more. But now and then you get a game like that. One that checks so many boxes yet doesn’t fall into place due to choices that don’t gel.

The game starts with an intro that reminds me of Avengers: Endgame. But instead of freeing Ant-Man from the Quantum Realm, a rodent revives a discarded maintenance robot. And no, he isn’t WALL-E. Some will find the intro unoriginal, but I didn’t mind it.

While listed as “Role-Playing” on Nintendo’s page, this is a dungeon crawler, one that adopts many oversaturated rogue-lite elements. I quite like some games in this subgenre on Switch such as Sparklite, ToeJam & Earl: Back in the Groove!, and the best direct comparison, albeit a gentler one, Pokémon Mystery Dungeon: Rescue Team DX. But, I’ve noticed that lately, developers have been forcing this route when it doesn’t necessarily work to the game’s advantage. Void Terrarium is decidedly mixed in this regard. 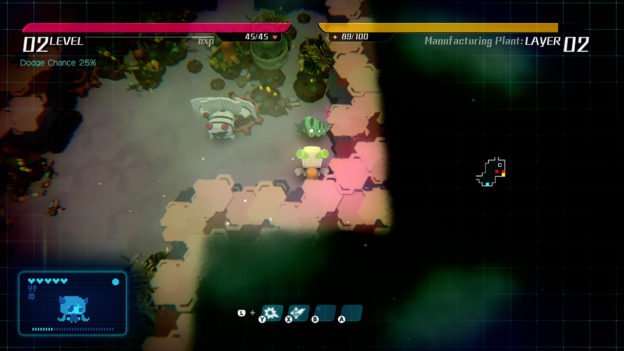 The game starts slowly, and for many reasons—exposition, animation, but mostly the gameplay. Robbie, the robot, needs to collect supplies for a human girl. Toxic fungi have poisoned poor Toriko to the point of near-death. Much of this supply collecting boils down to a conversion process of gained items upon exiting a zone. Still, if there was an in-game explanation for exactly how this crafting exchange works, I must have missed it. The goodies you compile tend to feel overly scattered and sparse. Part of that likely stems from how limited your inventory is. Occasionally, you can add to your inventory space when leveling up. However, most of your level-ups are short-lived in the subgenre fashion, resetting with the start of your next mission.

Repeating this collection process would be more entertaining if the battles were better. It starts with the maze-like environments, which are what you’d expect from a dungeon crawler. But they all tend to look and feel very similar. The old-school side of me doesn’t mind this so much, but more visual diversity would’ve been an undeniable asset. 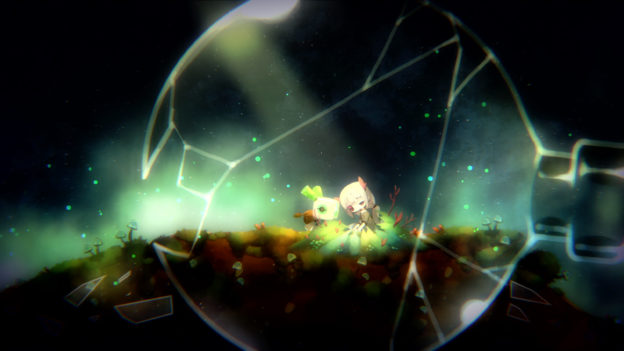 Working your way through these ever-changing mazes, you’ll encounter difficulty spikes, from invisible traps, or hordes absurdly surrounding you at random times. Find a “Monster House,” and without the right item, failure is imminent. I’ve noticed that when surrounded, the inventory button won’t always register, slowing down an already slow start.

I can often anticipate from the outset how early I’ll fail. The tougher enemies show up sooner, trying to surround almost from the start. Traps are near unavoidable, and I miss far more hits than usual. Long narrow hallways lead to dead ends; I expect that, but it doesn’t mean I find it enjoyable. While I give a point for transparency, I take off twice as many for the cheap design. It makes me feel that when I succeed, it boils down to randomness rather than my ability. Thus, getting to the more rewarding parts—namely, caring for Toriko—takes longer than necessary. 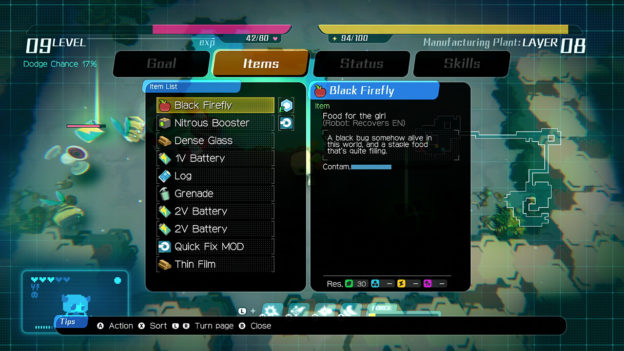 Even then, securing her survival may only hold your interest for so long. The game likens caring for Toriko to caring for a Tamagotchi—a flavor of the month for me back when, but one I moved on from within weeks. Will that be the same for this game? Will the wash/rinse/repeat loop wear out its welcome? I fear my answer is yes.

Be that as it may, the scaled-down sci-fi premise is an absolute winner for a dungeon crawler. I don’t mind procedural generation or even some of the more old school elements. And the music is terrific. If you can get over the early hump, the game opens with more dungeons and caring aspects. It’s heartwarming to nurse Toriko back to health. Fans of other NIS releases will probably enjoy this one, even more so if there are fans of rogue-lite games. Also, while I thought this was a $40 release, it’s only $25, another aspect in its favor. 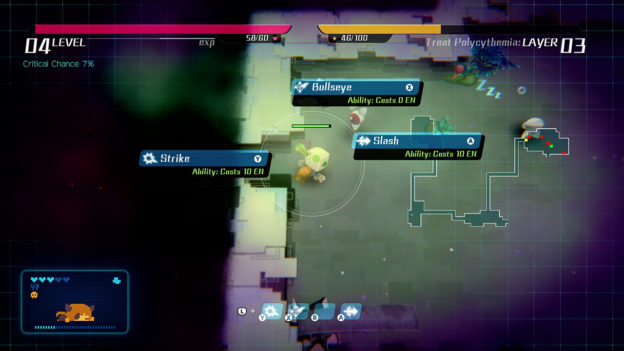 I so wish Void Terrarium offered co-op, where two robots could act as parents for the girl. Playing solo, I find the repetition soon leads to tedium. Working floor by floor through a dungeon, wondering why the game simultaneously discourages and promotes Robbie’s energy consumption to defeat threats that can overwhelm through no fault of your own. Meanwhile, Toriko waits.

The gameplay mix intrigues, but it’s weighed down by overemphasis on all too familiar rogue-lite tropes. I want to love Void Terrarium, but fine ingredients don’t always make for a satisfying dish if they aren’t balanced well. This game is too heavy-handed on tedium, and progress coming from random chance rather than skill.

Are you interested in a higher scoring NIS America release? Check out our review of the recently released, The Legend of Heroes: Trails of Cold Steel III.

The gameplay mix intrigues, but it’s weighed down by overemphasis on all too familiar rogue-lite tropes. I want to love Void Terrarium, but fine ingredients don’t always make for a satisfying dish if they aren’t balanced well. This game is too heavy-handed on tedium, and progress coming from random chance rather than skill.