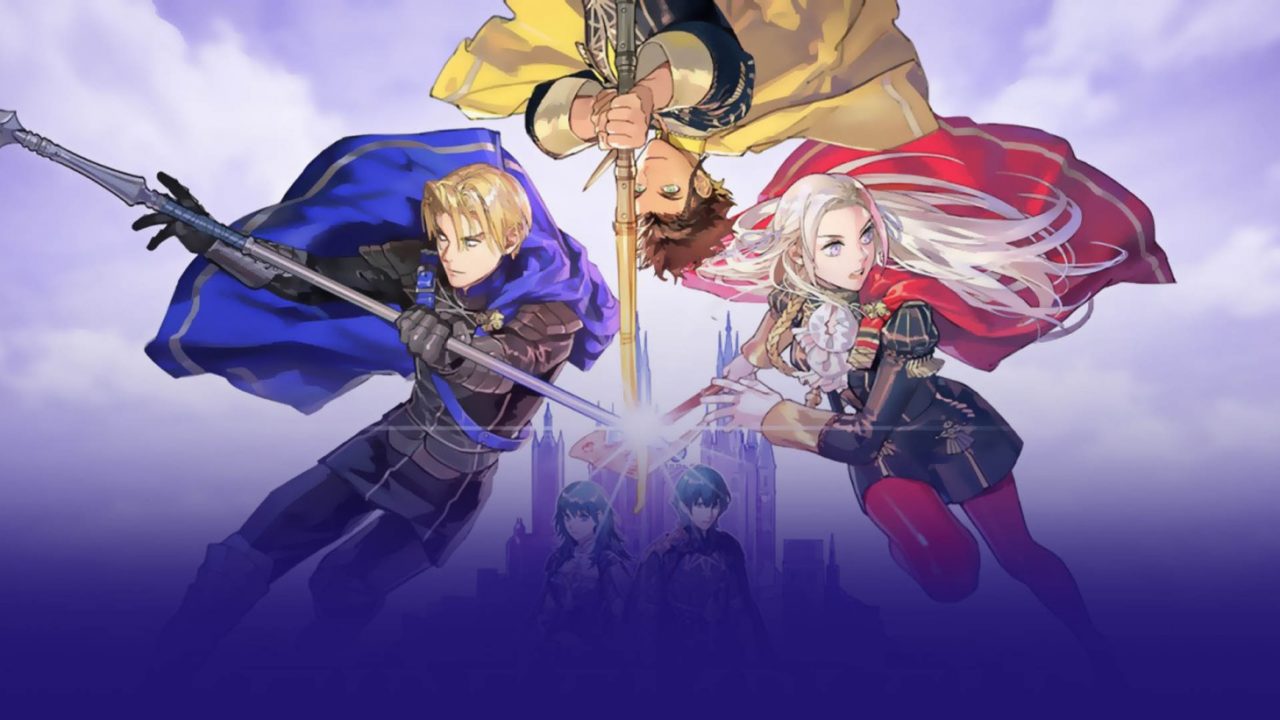 Fire Emblem: Three Houses is the latest instalment in the long-running tactical RPG series. It’s also the first official entry for the Nintendo Switch, following 2017’s spin-off, Fire Emblem Warriors. After a few delays and many years between true sequels, fans have been clamouring for this game. Does it live up to the reputation of its predecessors? To put it bluntly: if you’re not already playing Fire Emblem: Three Houses, you absolutely should be.

Three Houses takes the core Fire Emblem concept we know and love – turn-based battles, relationship building, and mastering the art of sword fighting – and steps it up several notches. It’s actually a tough game to review in a way since there’s just so much to it. Let’s start with something simple: the graphics. 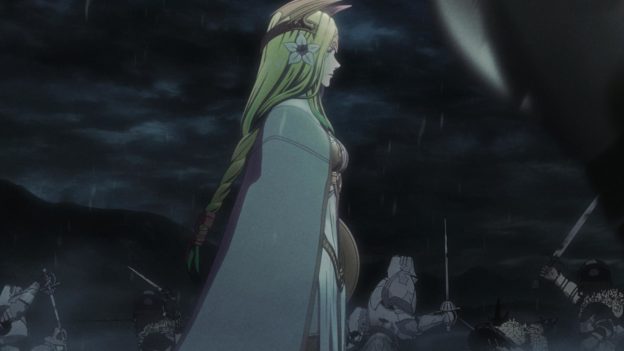 Visually, Three Houses looks spectacular. The game is set at a monastery that serves as a school, with towering cathedrals, classrooms with fireplaces, dormitories, dining halls, and everything else in between. There’s plenty of detail and everything is presented with colors that pop off the screen. The animation is absolutely beautiful, with cutscenes that feel like they could be part of an anime series. It works equally well on handheld and docked modes, though I preferred docked. To me, Fire Emblem feels more intimate on a handheld device (or maybe I’m just used to playing previous entries on the 3DS).

When it comes to fighting, the battlefield has never looked so glorious, with a deeper view than ever before. It looks vastly different from previous entries, with a map that almost bends in a 3D-ish way. It honestly jarred me a little at first – being quite used to the older games – but you can easily adjust the layout to your liking. You can move the view to be from a more overhead position, you can switch on or off the battle grid, or even toggle the character icons for a clearer view. 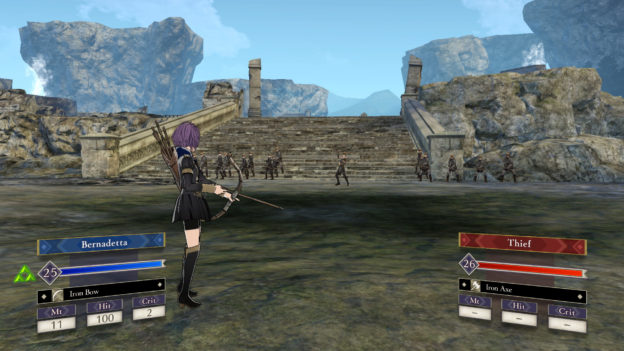 The music is equally impressive. It’s like orchestral pop music, blending symphonic melodies with a few modern beats to create a soundscape that truly fits with the game’s aesthetics. It’s catchy yet not annoying, creating the right mood – be it uplifting or dramatic – at the appropriate time. It’s very well done and gets stuck in your head (for the right reasons).

The great audio also extends to the voice acting. Three Houses is entirely voice acted, along with a script so you can read along. You can skip the text if you’re in a hurry; if not, you can set it to progress automatically so you can sit back and watch the action unfold. The actors all do a splendid job, with some very convincing voice work, keeping it particularly unique and compelling given the huge character roster.

And what a varied roster it is! I’m super impressed with the sheer number of personalities the team had to develop to create this unique world. Each student comes packed with his or her own dreams, fears, talents, moods, likes, and dislikes; the list is almost endless. As if that weren’t enough, you can build up their capabilities in any given area. It’s fulfilling to watch students develop aptitude in certain pursuits, whether it’s sword-slinging or faith. 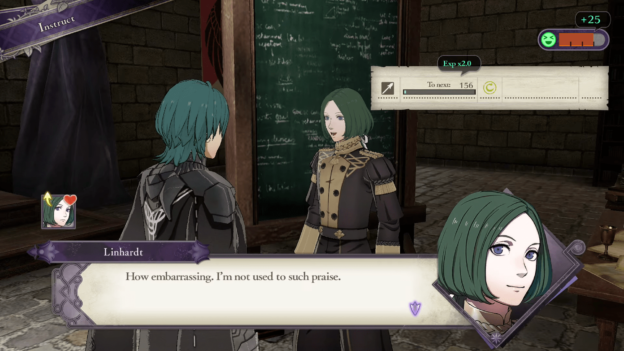 That fulfillment comes from your role in Three Houses. This time around, you’re a professor at a prestigious school. With magic, villains, and students who are divided into houses, you can’t help but think of Harry Potter. Thankfully there’s no Slytherin house here though. The three houses are the Black Eagles of the Adresian Empire, known for nobility and magic; the Blue Lions of the Kingdom of Faerghus, renowned for their chivalry and military skills; and the Golden Deer of the Leicester Alliance, who are well-equipped in the field of archery.

Your first duty at school is to choose which house to lead. This is particularly reminiscent of Fire Emblem Fates, where choosing your family led to different versions of the same game. It also provides excellent replay value since you could play through Three Houses again to enjoy the story from quite a different perspective. 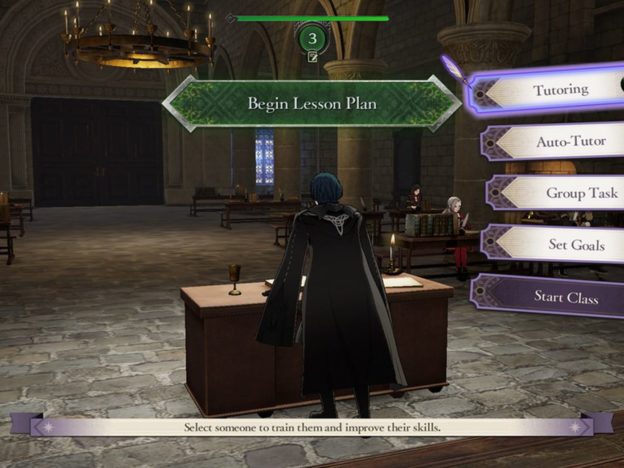 Even before starting the game you’ll need to make decisions; will you play normal or hard mode? Casual or classic? These are important – permadeath is a real option in Fire Emblem games! You’ll also need to choose a gender and name for your avatar (if you don’t like the name provided) before you set on your merry way. It sets the tone for the entire game since there are many choices to be made.

One of my favorite aspects of Fire Emblem games is the tactical battles that take place, and these are present and accounted for. If you’ve played a Fire Emblem game before, you’ll instantly be at home with the combat system (despite the new look); move your character, select an action, etc. It works well and provides those intense moments we’ve come to expect from the series. 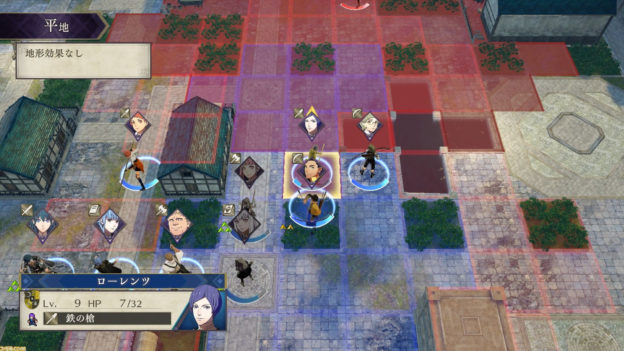 There are a couple of new features to look out for. Firstly, weapon durability has returned after being absent from the last couple of games. Weapons now degrade with each strike, becoming much weaker. They can be repaired, just not during battle. Secondly, helpful allies, called battalions, can assist a character. These provide an army that supports your attacks, although I didn’t find them particularly useful since they don’t seem to be consistently effective. But it’s fun to try them out, and it looks cool watching a horde of soldiers sweep across the field. Finally, the weapons triangle – a long-time staple in Fire Emblem – has been removed, instead providing unique weaknesses for each character. Apart from these elements, fighting is more or less the same, with some formidable enemies along the way too.

In terms of gameplay, Three Houses is much deeper than previous titles; it’s about more than a series of battles with cutscenes in between. Most of your time is spent at the school, building relationships with your students and motivating them. There’s a handy calendar system that swiftly moves you through days, stopping on certain events that allow for exploring, teaching, and even birthdays. The progression is perfectly paced. It’s extremely fulfilling to get to know your students; you become quite attached to them, and not just in the game. In reality, you feel a sense of pride when they do well or a sense of anxiety if they’re in trouble during a battle. The relationship-building element, coupled with the detailed personalities I mentioned, makes these characters come to life; it’s very well done.

There’s so much to do in Three Houses – this game will keep you occupied for many, many hours. Apart from teaching your house, you can also recruit other students to join you. You can fish or garden; visit the library; solve mini-quests. You can even dine with students to help build rapport. 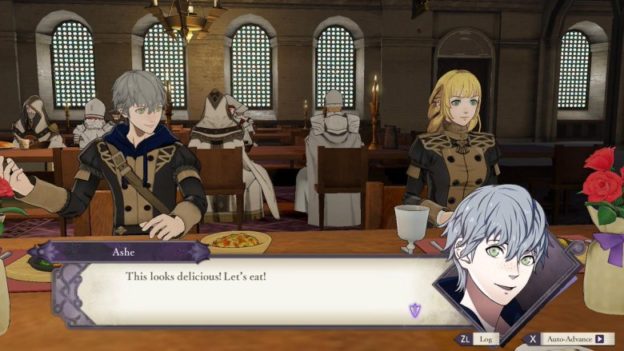 There are some extra touches that made me smile during the game, like the little 8-bit character who dances across the screen during loading or as the calendar progresses. There’s plenty of humor too, whether it’s the shyness of one student or the broken English of another. My only real complaint with the game – if you could call it that – is the lack of touchscreen input during handheld mode. I come from a 3DS background; I just want to tap on those menus sometimes!

Overall, Fire Emblem: Three Houses was a game worth waiting for. It’s easily the biggest and most impressive Fire Emblem entry to date. You’ll sink countless hours into this one, forming virtual connections with a wide range of interesting characters as you study and fight together.  If you’re a fan, you’ll love it; if you’re new to the series – well, there’s never been a better time to get started.

Fire Emblem: Three Houses was a long time in the making and, thankfully, was well worth the wait. It’s impossible to put down, bringing a deep story that involves true character development across a diverse cast, all voiced to perfection. It looks glorious and has epic turn-based battles to boot. This is a must-own game for every Switch owner.