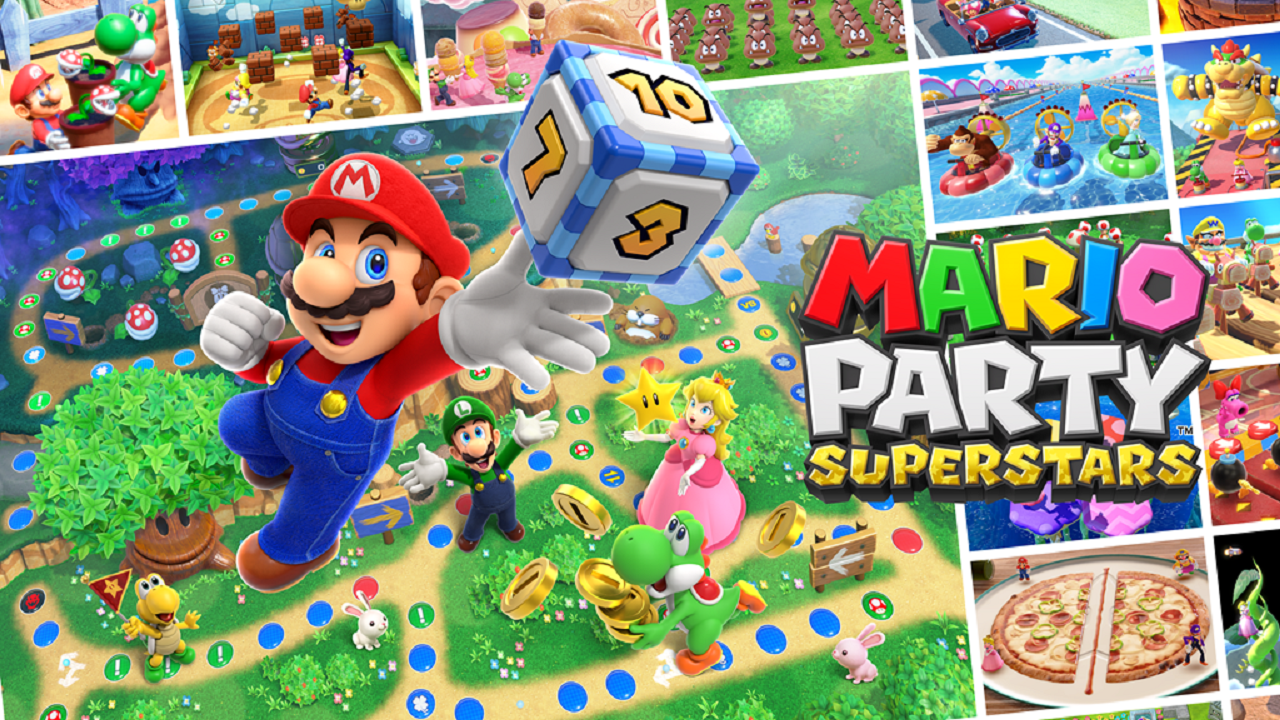 Mario Party Superstars is the second entry on the Nintendo Switch, one that proudly proclaims, “The Mario Party series is back with 5 classic boards”. Since I find the older console MP titles have many advantages that have made them so well-liked, Superstars caught my interest right from the start.

When looking at the series overall, it’s interesting to see the changes that have occurred over time. After doing seven straight yearly releases, the reception towards Mario Party became mixed due to the similarity between the games. Now, after a decade-plus of many entries changing things up, players are once again longing for the original formula instead of experimentation. If you’re in the latter camp, Superstars will be for you.

Unlike Super Mario Party, Mario Party Superstars makes no secret of its aims to attract those players who grew up with the Nintendo 64 games. Right from the intro—”It all started with this green pipe…”—nostalgia kicks in. All the boards are from the N64 trilogy, five at present. The absence of GameCube boards undeniably disappoints, but many of the GC minigames are here.

Word count doesn’t allow talk of all the boards at length, but I’ll briefly mention a few highlights from a couple of favorites. Yoshi’s Tropical Island from the original MP is the easiest board in this collection, and it’s a good one to start with for new players or those enjoying the game with children. The stars are limited to two locales, one on each island connected by Twomp toll bridges. You can see its influence in the later tropical Megafruit Paradise’s (SMP) watermelon and bridge design. Space Land, from the popular MP2, is a larger (less linear) board. Its many more spaces lead to different route choices. Whomps can chase you around the board, and the Bowser satellite fire laser can wipe out all your coins! As Toad says, “There seems to be a lot going on up here,” but the epic music makes this one fun to return to time and again.

Five boards, granted, is the least of any numbered MP entry, although I’m grateful these are less dependent on luck. I’d like to see another MP3 board added via DLC. How about some more characters, also? Superstar’s predecessor had 16 available from the start, plus unlockables! It’s hard not to be disappointed by comparison, given that Mario Party Superstars has less than half that number. I want more character variety. While I disagree with those saying this game isn’t worth $59.99, I understand many of their complaints.

How’s the minigame count? Thankfully, pretty darn good; 100 is a number that can make almost anyone happy. But that doesn’t mean I still won’t levy some gripes. Why cut nearly half the games from Mario Party: The Top 100? While that game wasn’t as well-received as many MP games, it laid the foundation that Superstars has mostly bettered. For instance, I get that 9 and 10 as ‘car’ entries aren’t as popular. But even combined, their representation in Superstars isn’t a third of MP3, despite both games outselling that N64 classic. I’d certainly prefer minigames like Badminton Bash, Bumper Bubble, and Peak Precision over Cast Aways (watch those palms!) or the unpopular Puddle Paddle. But, alas.

With those gripes out of the way, there are a lot of great minigames. The majority are the sorts that are fun to replay time and again, and you’ll recognize many from ‘all-time’ lists. Being able to practice them without loading a separate menu leads to quicker fun. You can separate them by action, family, or skill, to name just a few. And Mt. Minigames lets you play them sans a gameboard, with daily challenges, coin battles, and more. Tag matches (2 vs.2) are no substitute for SMP’s co-op but are welcome all the same. You can see which minigames are most popular in the Superstar community by going online.

Speaking of online, it’s too big a talking point to dismiss with a couple of sentences. One of the first things you can do is upload your card. It displays your favorite MP game (out of the numbered entries), four favorites of the hundred included minigames, and more. Additional card designs can be unlocked and purchased at Toad’s Shop.

I’ve had no issues finding games to play online. The competition is assorted. One game had a rookie and another player at 65. But Superstars has enough chance to keep things close while eschewing some of the “luck” that dominates Mario Party: Island Tour, for instance. My only real issue is getting a “Communication was interrupted. Ending online mode.” message a couple of times. Thankfully I rejoined very quickly. So while the online can be rough by most standards, it’s good by Nintendo ones.

While I’ll always prefer having competition in the same room, online is a welcomed alternative, especially with COVID still being an issue in many areas. Online play can give Superstars the type of legs that other local-only MP games don’t have. While I’m still hoping for a PN game night, I’m happy to report that my experience with strangers (and communication via stickers) has been positive.

Whether you’re enjoying these boards online or off, they’ve never looked better than they do in HD. Superstars is a game that’s dressed in color, offering an appealingly crisp appearance. The presentation is snappy, especially when compared to the older originals that are dated. There are even unique visual elements for additional variety, like Horror Land’s night/day cycles. The music is no slouch, either. I particularly appreciate the option to pick between classic tunes and modern updates.

Many welcomed options are available in Superstars. These include (but aren’t limited to) adjusting bonus stars, minigame types, and handicap settings. Note that ‘Normal’ CPU difficulty (while mostly fine) can lead to some odd decisions. So, if not playing solo, you might consider bumping a player or two at least one higher—four settings are available.

Options to keep things moving are also appreciated. Games can be as few as ten turns or as many as thirty. Want a faster experience? Increase the CPU movement and text speed. Saving means you can play for short spells and return later. Even the means for handheld play (no motion controls) is a welcome option for Lite players.

The Mario Party series started in the late ’90s and has endured to nearly 20 games so far. At this point, readers will likely know if they enjoy the series. If yes, this game is for you. For newer or first-time players, it’s more of a debate between SMP and Superstars.

With Mario Party Superstars alongside Super Mario Party, the Nintendo Switch has two different but great series installments. While Superstars would benefit from more boards, it’s a charming nostalgia-laden trip with far-reaching multiplayer appeal for family and friends of all ages. It’s also replayable as ever, with online play, achievements, and unlockables.

With Mario Party Superstars alongside Super Mario Party, the Nintendo Switch has two different but great series installments. While Superstars would benefit from more boards, it’s a charming nostalgia-laden trip with far-reaching multiplayer appeal for family and friends of all ages. It’s also replayable as ever, with online play, achievements, and unlockables.